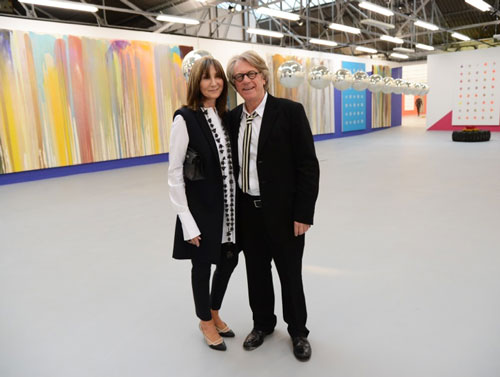 Frank Cohen’s mania for collecting began in childhood—then, it was cigarette cards, coins, toy soldiers, and jukeboxes; now, it’s modern British art, as well as some contemporary Japanese (from the Superflat movement especially) and modern Indian and Chinese art. His career began in sales, and he later opened a home-improvement business where he met Cherryl. Through Cherryl, who came from a family of art aficionados (Frank managed to sell an L. S. Lowry print to her father, the chairman of the Fine Art Trade Guild, every time he came to the house), Frank received an education in art history, and an obsession was born. In 1970, the couple acquired their first piece: a £1,100 postcard-sized Lowry, titled Our Family. The pair are known for their support of the Young British Artists as well as their penchant for modern artists like Stanley Spencer, Edward Burra, and Eduardo Paolozzi. The Cohens founded Initial Access in 2007, a foundation in Wolverhampton, England, that promotes the work of younger artists in their collection. Frank also opened an independent, nonprofit contemporary visual-arts institution in Bloomsbury, called the Dairy Art Centre, with art adviser and collector Nicolai Frahm in 2013. The Centre offers free exhibitions to the public.

Prediction: President Trump will blame a spike in coronavirus cases on all the protests