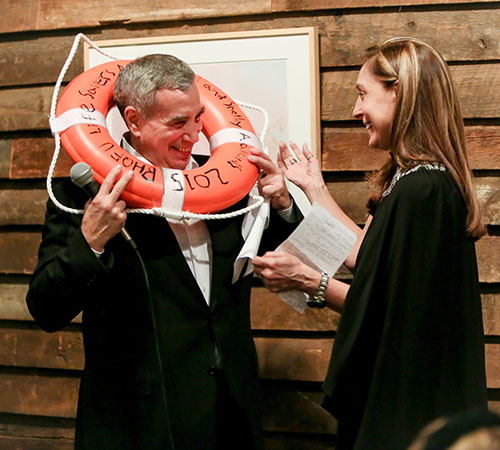 ‘We began as art appreciators many years ago when Phil was an undergraduate art history major at Columbia,” the Aaronses told ARTnews. “Our student schedule allowed ample time for travel and frequent visits to gallery and museum exhibitions. Our student budget did not provide for purchasing any of the art we viewed. As the years passed and our budget increased, we gradually began buying some of the art we had long been viewing.” Phil is a real-estate developer who, in 1990, cofounded the firm Partner Millennium Partners; Shelley is a psychiatrist. The two own work by more than 500 artists, and are especially known for their support of artist books; Phil is the president of Printed Matter’s board. The first artists they began collecting in depth were Tom Sachs and Guillermo Kuitca, according to a Flash Art interview, and they count many as close friends. (“Shelley has given me tons of free psychotherapy,” Sachs told New York magazine in 2012.)

RS Recommends: Yes, You Can Get These Noise-Cancelling Headphones for Under $60