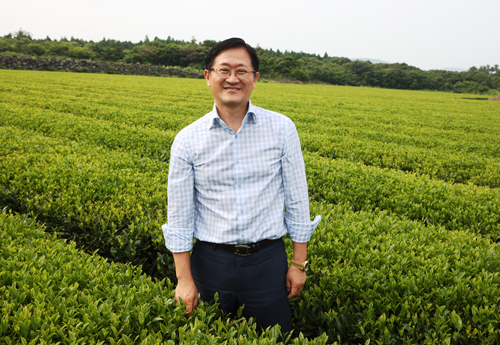 Beauty may be Suh Kyung-Bae’s business, but it is also his passion. And not just “beauty” in a cosmetic sense. Although his company is one of the leading cosmetics companies in South Korea, in Suh’s own words, “AmorePacific is a company that spreads culture rather than just sells cosmetics.” The company has its own art museum, established in 1979, that is dedicated to the research and exhibition of Korean art. According to Suh, however, promoting Korean artwork in his home country is not enough. The company aims at “improving the status of Korean women’s culture and promoting the excellence of Korean culture across the world.” And it is doing just that. In 2005, the company opened an exhibition in Japan titled “The Grace and Beauty of Korean Women,” and in 2008 it donated $300,000 for the opening of a “Women’s Quarter” in the Korean Gallery of the Los Angeles County Museum of Art. More recently, Suh pledged $200,000 a year for five years to LACMA for the purchase of contemporary Korean art, as he continues to fulfill his goal of being a “cultural missionary” for Korea to the wider world.

This big stinky ‘corpse plant’ is blooming live on the internet