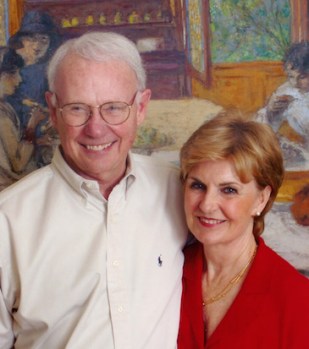 Vicki and Roger Sant’s collection focuses on the Post-Impressionist group known as the Nabis, including works by Édouard Vuillard, Pierre Bonnard, and Maurice Denis. Vicki, who died in December 2018, was a trustee emeritus at the National Gallery of Art in Washington, D.C.—an institution to which the Sants have gifted an acquisition fund for 19th-century paintings—and the couple was also involved with the Phillips Collection, the Smithsonian, the National Symphony Orchestra, and other institutions. In 2014 the Sants were awarded the Eli and Edythe Broad Award for Philanthropy in the Arts. Vernon E. Jordan said on that occasion, “[The Sants] are making it possible for people to be exposed to and a part of something out of the ordinary that will enhance their lives. That’s a very good thing.” In June 2019, Roger on behalf of his late wife gifted more than 40 of their Nabi works to the Phillips Collection, which the museum’s director Dorothy Kosinski lauded as “nothing short of transformative.”

7 Things You Didn’t Know Rewards Could Do

Skip the Shaker and Sip on These Canned Cocktails Instead