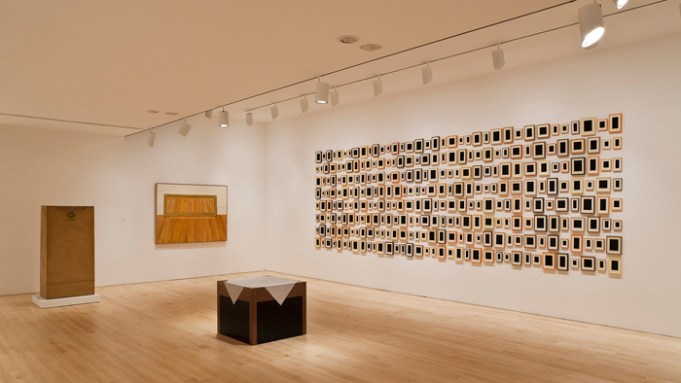 As has been discussed to the point of near-exhaustion, this year’s Whitney Biennial of American Art was a stripped-down presentation in tribute to the newfound chastity of our financially- and politically-strapped times. The 2010 edition, curated by Francesco Bonami and Gary Carion Murayari, has fewer artists (55, down from 81 in 2008, when the show spilled into the Park Avenue Armory), and no theme, just the post-apocalyptic, post-linguistic “2010.” Both curatorial decisions adopt the rhetoric of the “cross-section,” or the transparent mirror to America. There are bold gestures in this show: more works by women than men; institution critique artist Michael Asher will keep the museum open for 24 hours for three days at the end, as long as the museum could accommodate; and more than two full rooms devoted to paintings. But over all, the show’s rhetorical style whispers neutrality, which shifts the burden of interpretation to curators’ hang.

Indeed, the curatorial style is very American, in a 40-acres-and-a-mule, take the money and trickle with it, kind of way. Bonami and Murayari draw up a floor plan, and artists fill an allotted space according to taste, with the limitation that each prepare or contribute one work, or one series of works.

Speaking in their shared catalogue essay to a historical context that’s recently seen cynicism about the impact of public speech and new optimism in Obama’s first term, the curators wrote, “If the goal of artists in 2010 is to find these new communities, they start from the position of one artist standing alone.” This is a lesson that contradicts the prevailing messages we’ve heard about young artists working on the Internet, the last Whitney Biennial, last year’s Venice Biennale, and an abundance of exhibitions obsessed with the pervasiveness of networks and collectives. It’s an ideological message that reflects the way the Biennial was put together.

Artists seem to have responded glibly to this structure of exhibition. Richard Aldrich, for instance, put a talismanic and decidedly muted wood combine in front of the Whitney’s irregular Marcel Breuer-designed windows. It was humorously called Stranger in a Strange Land (2010). On the second floor, Robert Grosvenor crushed velvet flock in a technique that recalled Anish Kapoor, but instead of the latter artist’s zooming forms we get a bridge stretched low across the floor in a bulbous cluster. The sculpture sucked all of the air out of the room, right at the show’s entrance. David Adamo’s Untitled (Music for Strings IV) (2010), comprising a cane and woodchips scattered on the floor, is a fragile but hammy prop, but also a portrait of an artist spectacularly stripped of his devices. LEFT: ROBERT GROSVENOR, UNTITLED, 2009. COURTESY THE ARTIST AND PAULA COOPER GALLERY, NEW YORK.

Over all, the room-size installations are best suited to the artists—not necessarily because artists in an economic downturn are working in discrete solitude, but perhaps because they are used to the model of the solo gallery show, the prevailing distributor of art and, of late, of intellectual capital. Charles Ray’s beloved room on the fourth floor is filled with ink drawings of flowers. The simple, languid arrangements of petals are surprisingly acrid; they even look a bit like colorful anuses while belonging entirely to the genre of the old-man sitting room painter. The untitled installation is entirely earnest and potentially unforgettable, but in the course of the show it reads like a joke by the curators about showing whatever you want by an artist the caliber of Ray. More thoughtful about the meaning of participating in an institutionalized survey like the Biennial are R.H. Quaytman’s works, which are produced in biographical chapters. In one of nine paintings with various surfaces, some of them sparkling and others flat, she’s painted the museum’s Breuer’s window like a kitschy dream.

In the show’s definitive contribution, New York-based artist Sharon Hayes both distills and transcends the show’s concerns. In the middle of a third-floor viewing room, the artist has built a makeshift booth of wood and foam with four video screens that shuffle feeds, causing for an unsettling reassessment of the space of viewership. In the videos, a lone butch woman appears, collecting sounds and occasionally writing what she hears. The unnamed figure in the video stands as a voice for alterity in public space as she records a reading of early lesbian activist Anna Rüling’s 1904 speech, “What Interest Does the Women’s Movement Have in the Homosexual Question.” Her forceful but anonymous strategy entails standing so close to her material that she gains a physical intensity. To turn a cliché in a cliché-less installation, the silences in Hayes are deafening.

Josephine Meckseper’s video is also intriguing: She was in the Biennial in 2006, making her the before-and-after, boom-and-bust witness. For Mall of America (2010), the artist videotapes the eponymous altar to middlebrow consumption in voyeuristic detail, lingering especially on a flight simulator with images from the military. Because the execution and resolution of the critique is so tight—the repression of physical violence and its fulmillment via consumption—we wonder who to blame for the condition of muted bust that this Biennial inhabits. It doesn’t help that like all the other videos in this show, it is not shown alongside other works.

Two rooms devoted to multiple artists that should be the fulcra of the show read like examples of predictive curating, a script that doesn’t really go off because it’s a cold read. On the museum’s second floor in the back the curators have created a ghetto for artists working with grotesque figuration. George Condo shows a small work, Integrated Forms (Birnam Wood) (2009), the inverted, signature mask face receding into a field of green abstraction. It’s tucked into further a corner. For Master of the Universe/FlexMaster 3000 (2010) Aurel Schmidt draws a monumental Minotaur with an exposed penis both hyper-real and Romantic, a Blackberry, and a bird on its shoulder culled from Jeff Koons’ “Banality” series. There’s an outstanding baseness to the mode of accumulation and appropriation. Robert Williams, the “hot-rod artist” and founder of Juxtapoz art and tattoo magazine, contributes six delicately rendered watercolors depicting political fables. Huma Bhabha’s melted, mask-like figure in My Skull Is Too Small, 2009 makes eerily explicit the decrepit human forms in West Coast assemblage. On paper, it’s a pleasure, and a radical one, that these artists, many of whom are uniquely disconnected from the gallery and museum systems, would be represented in one space. But the pleasure is one-sided, as the combination is flat and there are no compelling views of multiple works.

Upstairs, a second room makes a similar list of artists working with abstraction feel like a list. There is the combination of work by Sarah Crowner, whose stitched-together black and white canvases create a dizzying, physical effect while blurring the painting’s relationship to sculpture, and that of Tauba Auerbach, who in three “fold” paintings devotes an enormous amount of painterly skill to creating trompe-l’oeil disorientation. It would’ve been nice to see different works by Auerbach; these have been adequately represented at fairs and other surveys, and embody the huge visual impact but not the complexity of her work. Suzan Frecon’s meditative arcs of color gradations suggest the form’s relationship to landscape, while insisting that they be experienced in person, like monuments. As a whole, the works in this room are about preserving the sanctity of painting in spite of advancing technology, an important point, but one each makes on its own. By contrast, Lesley Vance’s four intimately-sized still lifes—fruit rendered as streaks of color and cavities—grow in their liveliness and range of interpretation by their installation near Aki Sasamoto’s Ernesto Neto-like hanging web of intimate found objects, and the show’s obligatory photojournalism.

The inexactitude of the show’s installations comes in readymade contrast to the “prelude, counterpoint, and coda to the Biennial” (the press release) on the museum’s top floor, which is an outstanding show of works by artists who have participated in previous Biennials. Like the New Museum’s controversial franchise dedicated to importing foreign private collections, this show has some self-reflexivity to its premise: It acknowledges that the works or series prepared for the Biennial are available to the collecting museum first, at a cut-rate price. (Next comes the major collectors, who walk the show before the opening). Just as importantly, the show demonstrates the curators’ capacity to mix media and create dynamic juxtapositions of works. In just one example, take Alex Hay’s Paper Bag, (1968) Richard Artschwager’s laminate-on-plywood table Description of Table (1964), Sherrie Levine’s Untitled (Golden Knots:1) (1987). They’re just three works in a dynamic room that demonstrates how artists working out of camps and eras as different conceptual art, pop, and the Pictures Generation considered the self-reflexive work of art.

“Collecting Biennials” also sees one of the best integrations of a reading room into an exhibition I’ve seen; in the lower mezzanine, the curators installed bound photocopies of vintage catalogues, and a timeline in a vitrine. It’s an exciting resource, even if you just play “who’s stuck around?” with the catalogues (More than you’d expect). But the most impressive impact in evidence is the extent to which the Biennial envisioned itself an innovative body. In 1975, the museum prohibited artists who had showed solo in New York in the previous decade, It’s an unthinkable gimmick now, as it was then, when the art world was even more restricted to New York.

The third edition of Greater New York, the periodic survey of emerging artists in the metropolitan area, opens this summer. Like the Biennial it will be a smaller event, with 75 artists (down from over 160 in 2005; the list is still unannounced), and presumably none of the previous incarnations’ last-minute improvisations. There is time yet to complicate that procedure.

Paramore Ignore the Hourglass on New Song ‘Running Out of Time’