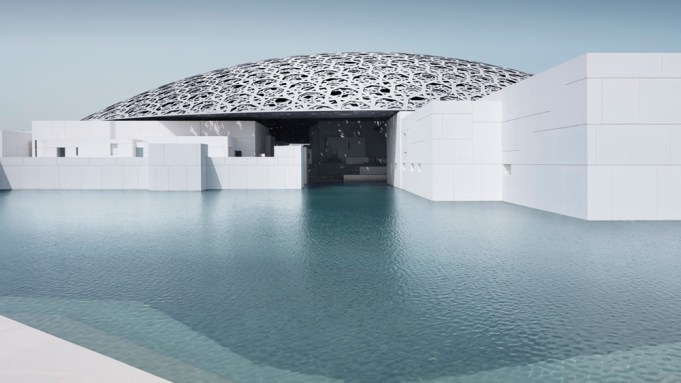 The Louvre Abu Dhabi Museum opens officially to the public November 11, though Arab sheikhs, French president Emmanuel Macron, and other VIPs got a preview Tuesday.

Designed by Pritzker Architecture Prize winner Jean Nouvel, the museum comprises some fifty white-cube galleries that spill from under a perforated steel canopy, off which sunlight flickers across the sprawling 260,000-square-foot complex. Sitting on the seaside of the United Arab Emirates’ capital city, the institution resembles nothing so much as a floating, cracked-open Rubik’s Cube in white and grey. And, much like a Rubik’s Cube, it is both maddening and addictive.

In an unprecedented deal, many of the several hundred artworks inside are on loan from the Louvre and from a dozen French national institutions in a consortium dubbed Agence France-Muséums. (The thirty-year partnership, which reportedly cost Abu Dhabi one billion dollars including construction, entails special exhibitions, revolving art loans, curatorial consultations with a raft of Louvre staffers and the loan of the Louvre brand name.) The display diverges from the encyclopedic tradition epitomized by the Louvre—the collection is organized by era, and sometimes topic, rather than by geography. Adieu to the “Egyptian Wing” and the “Arts of Asia Gallery.” Here, in one of the ancient art galleries, a Gandharan figure from Central Asia stands next to a Roman one, flanked by a Han dynasty horse and a pre-Columbian mask. Another room pairs the legendary Blue Qur’an—a medieval manuscript on indigo-dyed vellum—with a Yemenite Torah and a fifteenth-century French Bible. In a witty gallery illustrating the art of war, Napoleon rides in on horseback, crossing the Alps in one of Jacques-Louis David’s most famous paintings, this version on loan from Versailles The display is a visual farrago. But as with the Barnes Museum, the jumble can occasionally be magnificent.

First announced over a decade ago, the museum has been plagued by delays and controversy. The global media has reported on substandard working conditions at the construction site (though the issue was given short shrift in the news coverage on the eve of this week’s unveiling). In his opening remarks, Jean-Luc Martinez, president of the Louvre, briefly addressed these concerns. “We made sure that [conditions for] all the workers on the site conformed to all the regulations of the country,” he said.

The Louvre Abu Dhabi was supposed to be the first of several starchitect-designed cultural institutions on Abu Dhabi’s Saadiyat Island, all of which are now in various degrees of limbo: a Guggenheim satellite by Frank Gehry, the Maritime Museum by Tadao Ando, a performing arts complex from the studio of the late Zaha Hadid, and a museum in honor of Sheikh Zayed Bin Sultan Al Nahyan, former president of the UAE, from Foster+ Partners (the British Museum withdrew from its partnership agreement with the Zayed National Museum last month).

But the Louvre Abu Dhabi pressed on. The UAE augmented the Louvre’s loans with its own recent acquisitions and commissions. These include a handful of glorious early photographs (many of which are from Egypt), works by Jenny Holzer and Ai Weiwei, and a Piet Mondrian that formerly belonged to Yves Saint Laurent.

The blockbuster Impressionist room, much of its material from the Musée D’Orsay, Paris, features beautful works by Manet, Caillebotte, Monet, and other big names. It risks coming off as a “greatest hits” of French painting. But few of the works are the overexposed ones seen on gift-shop postcards. In the modernist galleries, a black-and-white Jackson Pollock hangs opposite a moody, deep-purple Mark Rothko. The paintings sit so gorgeously in conversation that you can imagine both artists making the works for just this space.

Viewers who dive into every corner will be rewarded. There is a sarcophagus visible only after negotiating a maze of black marble vitrines, while a dimly lit side gallery opens onto an Art Deco room by Jacques-Émile Ruhlmann, transported from the Champs Élysées. Other highlights include an 1888 van Gogh self-portrait, La belle ferronnière (ca. 1490–96) by Leonardo da Vinci (though its attribution has been disputed for decades), Bellini’s vivid and spiritual 1480-85 Mother and Child, and Paul Gauguin’s Children Wrestling (1888).

There are problems. The need to have wall text in three languages minimizes the information avaialable in each one. The Nouvel building and its grounds are unfinished, so first impressions, at least from the land-locked side are underwhelming. The organizers are simply trying to do too much here, and the historical narrative can get muddy. Consider that, in the Renaissance galleries, dishes from the Ottoman empire sit in front of the aforementioned da Vinci. However, if this juxtaposition rankles, it is easy enough to forgive when you spot works by Titian and Holbein hanging nearby. (One guest from France, where the collaboration has been criticized as a sale of the nation’s cultural patrimony, argued the latter was& a “basement Holbein” piece. But it is not in my basement, and I wish it were.)

All in all, while the Louvre Abu Dhabi can seem in places like an art-historical CliffsNotes, the ambition to reshuffle the deck and the fabulous objects thus brought together make the museum a game-changer. It has the potential to dramatically shift perspectives on world culture. On a personal note, I was sorry to leave. I wanted to tour one last time to see what I had missed. Blessed and mobile as some of us are in the art world, we see a great many museums and become jaded. This one offers a sense of new discovery. At the opening, Mohamed Khalifa Al Mubarak, the chairman of the Abu Dhabi Tourism and Culture Authority, made an announcement that would have sounded puffy patriotism if it were not delivered with such a genuine thrill and effervescence. “It is a great day, a great day when you will all see history,” he said. “This is a museum for the world. It will broadcast tolerance, acceptance, culture.” May it be so.