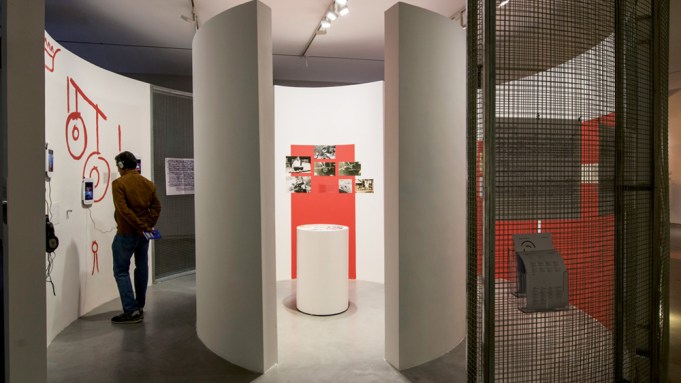 In 1976, representatives from the Philippines government and the Moro National Liberation Front, a splinter group of the Muslim Independence Movement, signed a peace accord in the Libyan capital. The resulting Tripoli Agreement established an autonomous Muslim region in Muslim-majority areas of Mindanao, or the southern Philippines. Researcher Renan Laruan’s group show at the Sharjah Art Foundation did not dwell on subjects like the degradations suffered by Muslim Filipinos (Moros) during dictator Ferdinand Marcos’s brutal regime (1965–86) or the Moros’ four-century history of anticolonial resistance to the Spanish, Americans, and Japanese. Rather, the exhibition brought together work by contemporary artists, research collectives, and ethnographers to present slices of Moro culture. The show did not give any social or historical context, and thus seemed geared primarily toward the United Arab Emirates’ large population of Filipinos, who make up an estimated 20 percent of the population in Sharjah’s neighbor Dubai. It also lacked thematic coherence and, really, any clear premise. But this reluctance to explain and to serve difference up for consumption felt like a return to the solidaristic South-South spirit of the 1955 Bandung Conference, a meeting of (largely newly independent) African and Asian nations.

Aside from a multipart project by Prajakta Potnis about a Cold War debate between American and Russian leadership and an installation by Sina Seifee that seemed to suggest a gaming cybercafé as a site of internationalist diplomacy—perplexing inclusions in the show—most of the works focused firmly on the Philippines. A charmingly scrappy presentation by Dayang Yraola centered on composer and ethnomusicologist José Maceda’s embrace of a type of tuned Moro percussion instrument, the kulintang. Also rewarding was Mark Salvatus’s Notes from a New World: an installation combining printed matter, video, and sound components related to the Philippine Army Band, which was founded in 1901 by a black United States Army lieutenant early in the roughly fifty-year American occupation of the Philippines. The video shows current members of the band practicing the William Tell overture, which was played when Filipinos were displayed like animals at the 1904 world’s fair in St. Louis, the footage serving as a dark reminder of the massacres and indignities that have characterized the Moro experience.

Unfortunately, like so many other South-South alliances that never quite were, the show struggled to make the leap from page to three-dimensional world. Just being in the same room together does not constitute a conversation. It felt as if the work of artists and researchers had been instrumentalized, conscripted to support a show in which the hand of the curator was not heavy so much as clammy, an uncomfortable presence.

Physician and scholar Najeeb M. Saleeby’s early-twentieth-century texts about the various peoples of the Muslim Mindanao island group had been collated into a series of encyclopedia-like gold-foiled books, heightening the sense that the exhibition was merely a kind of compilation. As with other historical inclusions, this project was attributed to the historical figure himself, yet all decisions about material form and display seemed to be the curator’s. Fascinating subjects suffered from presentation choices, as with Anjing (Dog, 2018), the Malaysia Design Archive and Abdul Nazir bin Harith Fadzilah’s investigation into whether it is religiously permissible in Islam to touch dogs, which are considered unclean. Archival footage was projected onto a small raised platform surrounded by glass walls printed with a timeline. Lighting conditions rendered both difficult to make out. Perhaps this was the idea? In any case, the point stands.

Most intriguingly, the show was the inaugural project in the “Air Arabia Curator-in-Residence” exhibition series. The remit of this series organized by the Sharjah-based low-cost airline is somewhat original: curators are invited (or selected via an annual open call) to work with artists whose backgrounds sync with cities on Air Arabia’s ever-expanding flight map. The hope is to produce cross-cultural mashups that emphasize connections between Sharjah and Air Arabia destinations and engage with the local regions. Yet given that both the foundation and the airline were established by the emirate’s ruling family, the collaboration feels less like native advertising than like a seductive exercise in soft power. In the UAE, there’s often no difference.