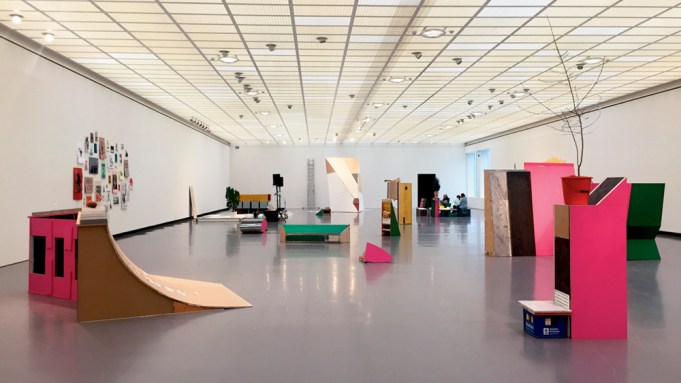 Abraham Cruzvillegas’s sculptures and installations often hew to a principle he calls “autoconstrucción” (or “self-construction”), which—inspired by the manner of architecture he encountered while growing up in the Ajusco neighborhood of Mexico City—centers on making work collaboratively in an ad hoc fashion with materials at hand. The approach, which he began pursuing around a decade and a half ago, has spawned various offshoots, such as autodestrucción and autoconfusión. His Kunsthaus Zürich exhibition seemed to signal a new development. Titled “Autorreconstrucción: Social Tissue,” the show was a constantly changing installation: not only were sculptures regularly produced on-site and incorporated into the overall mix, but workshops and other events carried out within the installation served to alter it with their frequent activity and influxes of people.

Usually, the windows in this gallery at the Kunsthaus are covered, but for Cruzvillegas’s show they were not, allowing sunlight to stream into the space—openness was the order of the day. In a “studio” area set up near the windows, assistants made works using a motley assortment of materials, including cardboard, plastic and wooden crates, and discarded electronic equipment. They painted certain components pink and green (a palette Cruzvillegas has used in previous work, in reference to the colors of a mambo school that Hélio Oiticica was involved with, and took great inspiration from, in the Mangueira favela in Rio de Janeiro). The assemblages were sometimes given absurd flourishes, as in a chair on roller skates that was incorporated into Das soziale Gewebe A (Social Tissue A, 2018), which also featured shelving units and a potted tree. Organic elements cropped up repeatedly: in addition to several houseplants, there were a couple avocadoes, a spring onion, a sweet potato, and so on. A stage, a reading area, and a sort of skate park were constructed. Events held in these areas included concerts by local bands, a series of lectures given by refugees on subjects ranging from fashion in Senegal to aircraft maintenance, choreography workshops, and skateboard lessons. Visitors were allowed to sit, climb atop, and otherwise interact with many of the pieces, as well as to make works themselves.

As sculptures were completed, they were transferred into the exhibition proper and given labels, and, thus, endowed with the status of artworks. While most work in the show was of this newly constructed variety, there were some extant sculptures by Cruzvillegas on display, including a few pieces from 2017 featuring circular fishing nets. For each of these, a net is pulled up from the ground into a cone shape by a cord. Dangling at one end of the cord (just above the net) is a pigeon claw, and at the other a dried sausage, some smoked scamorza, or a beer bottle. Such works attested to the poetry, humor, and oddly affecting quality Cruzvillegas’s sculpture can have, though they were inevitably overpowered by all the hubbub around them.

Cruzvillegas’s approach in the show was both traditional (in that his community-oriented project was taking place within the confines of an established institution) and experimental (with the artist testing how he might direct the resources at his disposal to generate an expanded form of art-making). While one wished to see more of Cruzvillegas’s own sculptures, the art in this show lay, as the title suggested, in the social fabric that he wove. The perishable items scattered around the exhibition underscored that something intentionally short-lived and provisional was being orchestrated.