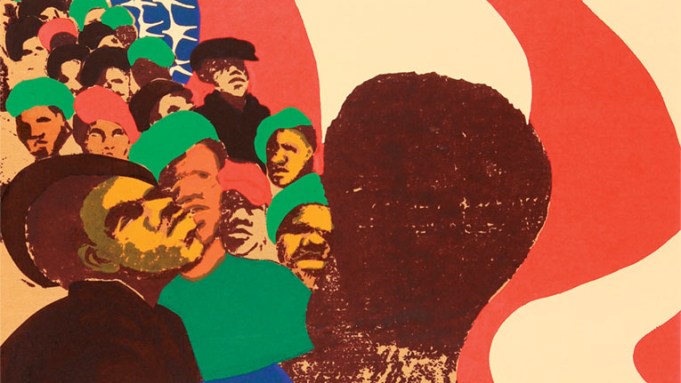 WHY AfriCOBRA (African Commune of Bad Relevant Artists) now, fifty years after its founding on Chicago’s South Side? Three reasons, at least. One, in the past few years, political activism has intensified, and a new generation of scholars and curators is clamoring for a corrective retelling of historical narratives that would reveal the proper dimension and coherence of the cultural artifacts that accompanied liberation struggles. Two, it is important to show that the work of AfriCOBRA members didn’t finish with the dissolution of the Black Arts Movement in the mid-1970s or, more broadly, with the culmination of Black Power politics: the group’s insights into the use of art in popular struggles opened pathways that extended beyond the immediate context in which those insights arose. To this end, “AfriCOBRA: Messages to the People” stretches all the way to the present, including not only historical works but also more recent efforts by the group’s members. The third reason it is important to revisit AfriCOBRA today is that some people feel the movement never sufficiently responded to its feminist critics, a problem that certain turns in contemporary public discourse imbue with new urgency.

Emerging out of the Organization of Black American Culture (OBAC)—a Chicago collective of writers, artists, activists, and others that is best known for the seminal mural its members created, Wall of Respect (1967)—AfriCOBRA was founded in 1968 by Jeff Donaldson, Jae Jarell, Wadsworth Jarell, Barbara Jones-Hogu, and Gerald Williams. The group tasked itself with generating positive and consciousness-raising images that specifically addressed the concerns of black people and that responded to what the members saw as an insufficient representation of black life. The artists worked primarily in two-dimensional formats, employing bright hues (“coolade colors,” they called them) and bringing together human figures, patterns, and text in allover compositions that tended to undulate, mimicking musical waves. In fact, music and the celebration of musicians were quite central to AfriCOBRA work. Filling canvases and sheets of paper from edge to edge suggested the way music can fill a room. The paintings and prints were meant to feel continuous with the cultural expression that permeates everyday life, so that artworks wouldn’t be relegated to a rarefied realm barred to common folks.

Famously, feminists proposed that the positive images of the Black Arts Movement, in carrying out the tasks of consciousness-raising and black pride–building, obscured problematic gender relations within the black community. Organized by Jeffreen M. Hayes, the current show—which features the same lineup of artists as “Ten in Search of a Nation” (1970), an early exhibition of AfriCOBRA work at the Studio Museum in Harlem—attempts to address this criticism in myriad ways. It includes, for instance, many pieces that depict female figures, arguing that black women were indeed celebrated and valued all along. Angela Davis serves as a recurring motif. She can be seen in Wadsworth Jarrell’s now-iconic screen print Revolutionary (1972), as well as in Gerald Williams’s painting Angela Davis (1971). Napoleon Jones-Henderson’s tapestry Decade of the Woman (1989) holds the center of a wall. Alongside images of female figures, there are a number of works that focus on the family, including Wadsworth Jarrell’s painting Black Family (1968), which submerges a portrayal of a nuclear family in a complex weave of figure and ground, a tapestry of curving lines, chemical colors, and floating letters. The more one looks at the works that focus on the family, however, the more one questions the heteronormativity that clearly slipped into the progressive politics. The original criticism addressing the lack of representation of women might have been more broadly and pointedly about the way in which patriarchal relations were reproduced within liberation struggles, as perhaps seen in Carolyn Lawrence’s earnest silkscreen Uphold Your Men, Unify Your Families (1971).

The exhibition generously showcases Lawrence’s body of work and those of Barbara Jones-Hogu and Jae Jarrell—another means by which it addresses the criticism concerning the under-representation of women. Hayes made a particularly wise choice in her selection of Jarrell’s works. She showcases not only the fashion designs for which Jarrell is best known—innovative clothes that celebrate African-derived aesthetics and motifs—but also her painterly and sculptural efforts, revealing a figure who has explored historical and personal themes in compelling ways using a range of materials, particularly as she moved toward assemblage.

Since AfriCOBRA’s halcyon days, the artists have transposed the use of intense colors, shallow pictorial spaces, and vibrant surfaces to new types of work. The historical pieces in the show can look a little dated when seen alongside the more recent ones, though there are of course some exceptions. In the collage Soweto/So We Too (1979), the late Jeff Donaldson invented an aesthetic out of patterning and pasting that still feels fresh today, while also reminding us of just how complex the use of text was in AfriCOBRA work overall and how internationalist the politics that informed the group’s project was. (Nelson Stevens’s screen print Uhuru, 1971, for instance, refers to the socialist pan-African Uhuru Movement.) But in general, the historical AfriCOBRA works feel moored to a particular era. By exploring these artists’ evolution beyond AfriCOBRA’s heyday, however, the show allows for a better understanding of the effects and potential of the movement’s innovations. The shieldlike painting-sculptures from Wadsworth Jarrell’s series “Yeah But, Can You Fight?” (1995) build on the painterly style that he began developing in the 1960s and connect it to the long tradition of black assemblage. Jones-Henderson’s sculpture Word Warrior-ess, June Jordan (2003), which memorializes African American poet June Jordan, also taps into this tradition, particularly the tendency to engage material elements bound to African spirituality, including symbolic fabrics, cowrie shells, and altar structures. Along similar lines, Jae Jarrell’s Victorian Beads and Glass Work Enscreened (2017) dangles a series of ropes, beaded necklaces, and glass pieces from what appears to be the skeleton of a room divider folded into a triangular shape. Here, again, rather than speak to consumerism’s decimation of collective experience or signal some clever but vacuous conceptual maneuver, found objects are used to build a symbolic and spiritual universe that can move parallel to the history of harrowing and triumphal episodes comprising the experience of African peoples in the Americas.

“AfriCOBRA: Messages to the People” revisits the large and rich, if neglected by the mainstream, world of 1960s black aesthetics and its legacy. It also appears at a time when the inability of contemporary cultural institutions to respond to the demands of a new activism and scholarship—as gaffe after gaffe evinces—has strengthened a desire to explore politicized cultural movements that rose from the ground up in the past. In this way, while looking back, the exhibition serves the needs of our turbulent moment.