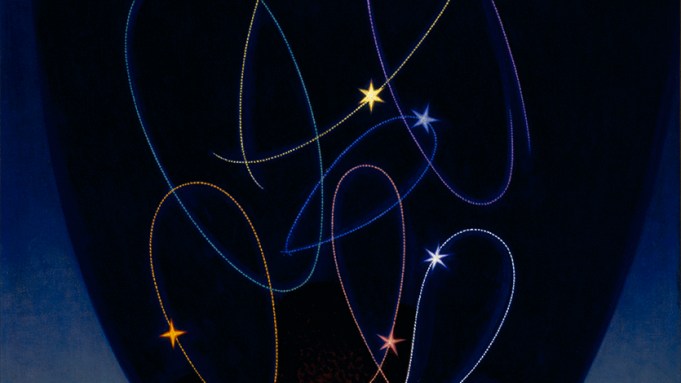 In 1932, at age fifty, Agnes Pelton, moved from Long Island to the desert town of Cathedral City, California, and, shortly thereafter, witnessed a great storm. She captured her impressions in the painting Sand Storm (1932), in which a rainbow arcs over abstracted palm fronds as the bulbous rays of a blue flower-shaped sun pierce the dirty yellow atmosphere. Given Pelton’s distinctly ebullient artistic style, the rainbow appears not as a chance collision of sunlight and mist, but as evidence of nature’s essential benevolence. Such optimism might be one reason that viewers in our anxious era have responded so positively to Pelton’s work. Seen through her eyes, the cosmos is flush with gentle energy, and no desert is empty. As with desolation, life, time, and inspiration, so with benevolence: look for it, and it abounds.

The Comet and the Hourglass: Theodora Allen at Blum & Poe

Forty-five of the German-born, Brooklyn-raised artist’s paintings were on view at the Whitney Museum in “Agnes Pelton: Desert Transcendentalist.” Organized by Gilbert Vicario at the Phoenix Art Museum, where it debuted, the show was the first solo exhibition of her work since a 1995–96 touring retrospective. Pelton, who died in 1961, was not unknown in her time: she exhibited her early, Symbolist-style “Imaginative Paintings” at the 1913 Armory Show; participated in a 1940 Guggenheim Museum exhibition of the Transcendental Painting Group, a late 1930s and ’40s New Mexico–based coterie of which she was a remote member; and showed extensively in the Southwest. But she has largely fallen to the wayside of history. Pelton lived a modest, isolated life. The Great Depression and World War II left as few marks on her paintings as on the sun-blessed vistas she loved. Her paintings are escapist, to be sure. But they are also rooted in a modern spiritualism, like the work of Hilma af Klint before her and the work of another desert-based Agnes, the monkish Minimalist Agnes Martin, after. Pelton’s ethos, like af Klint’s, evolved from Theosophy, a brand of American esoteric thought that emerged in the late nineteenth century and cherry-picked aspects of shamanism, astrology, and Eastern religion. “Desert Transcendentalist” argued that her paintings are at once illustrations of her spiritual views and an important contribution to modernist art.

At the Whitney, the exhibition was divided roughly chronologically into three galleries. The first featured mostly paintings that predated Pelton’s move to California, though it also contained the pivotal Sand Storm and a handful of works she made in the subsequent years. Paintings like Being (1926) and Ecstasy (1928)—busy displays of cascading colors and curving or angular forms—betray a significant debt to Kandinsky and lack compositional focus. Soon, however, Pelton was pursuing a bolder, more successful aesthetic defined by symmetrical pictures in which nonobjective or semiabstract forms sprout up from the bottom like plants. In the particularly austere Star Gazer (1929), a closed flower bud encased in a kind of celestial jar stretches toward a lodestar. In such works, landscapes began to structure the artist’s otherworldly visions—a hallmark of her mature style.

Allegories of birth, death, rebirth, and divine order appeared throughout the show, but the second gallery, painted dark blue, housed especially elegant examples. These works tended to be spare in the manner of Star Gazer, with a nocturnal palette and one or two central symbolic motifs. A luminous egg shape floating in a column of light between rolling hills and a cloudscape dominates the composition of Light Center (1947–48). In Birthday (1943), an anthropomorphic form that resembles a limbed figure eight suspended from an umbilical cord descends headfirst toward a star-studded firmament. Orbits (1934) depicts what seems to be a plume of deep space rising in an earthly twilight sky. Within the inky expanse, seven varicolored stars appear strung on their orbital paths like charms on necklaces.

The works in the final gallery exhibited a stunning synthesis of occult symbolism, geometric abstraction, and desert iconography. A handful of them portrayed motifs of ascendance: for instance, a chorus of cottony figural forms riding a surge of light in The Blest (1941), and a trio of cogs journeying into the bright yellow sky above a mesa in Prelude (1943). Pelton also exhibited and sold relatively conventional landscapes throughout her life. While none were shown at the Whitney, her aptitude for such work was evident in a handful of paintings on view, including a late one installed in this gallery, Idyll (1952), in which a skillfully rendered, realistic Mojave landscape provides the setting for two hallucinatory arcs of red and green. Similarly, Return (1940), displayed in the first gallery, offers a somewhat standard portrayal of a windswept oasis, despite the mildly surreal palm tree bending at the composition’s right edge and the ethereal phoenix holding a star in its beak. Such range points to something at the heart of Pelton’s practice: she found painting to be as generous as she did the desert. In her work, pictorial visions bloom from painted grounds like the smell of creosote bush after a desert rain.