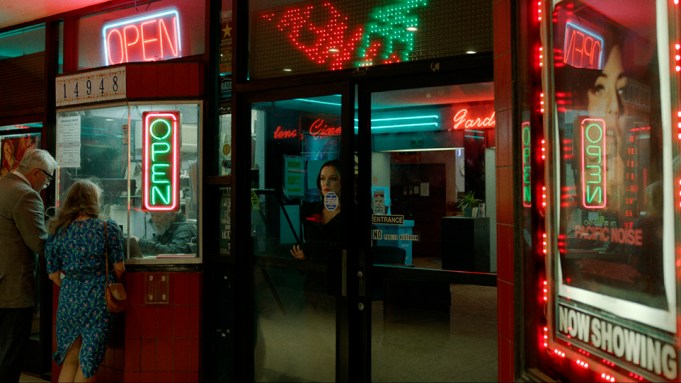 If nothing else, Alex Prager’s show at Lehmann Maupin served as a reminder that the influence of David Lynch should be handled with extreme caution. Lynch’s style is so singular that it can’t be reduced to obvious tropes or applied to some other artistic vision. It doesn’t stick.

This hasn’t stopped countless artists from attempting to give their work a Blue Velvet–y veneer, to the point where “Lynchian,” like “Brechtian,” “Kafkaesque,” and “surreal,” has become one of those critical adjectives that mean everything and nothing. Since Prager began working in the mid-aughts, her photographs, with their chintzy colors and vaguely 1950s American flavor, have been slapped with this label again and again, although they usually seemed to be aiming for a broader range of allusions—Alfred Hitchcock, Douglas Sirk, William Eggleston (also one of Lynch’s heroes). But in 2017 she photographed the cast of Twin Peaks for W magazine—a Lynchian assignment if ever there was one—and she seems to have caved to peer pressure with Play the Wind (2019), a short film featuring Riley Keough that tries so hard to evoke Lynch that it’s unclear if it achieves much else.

It might seem unsporting to criticize Prager for failing to measure up to one of the most towering creative figures of the last forty years. But consider the evidence. The first thing you saw at Lehmann Maupin, a giant statue of a woman in a red shirt and blue jeans, might as well have been a neon sign reading, UNCANNY. This, along with the rest of the show—Play the Wind on loop, plus a series of related photographs—suggested a jumble of Lynch’s favorite things with none of the underlying feeling. The film begins with a man driving through spooky, sprawling Los Angeles. He sees a woman in a red dress, and as they lock eyes, her visions become the film’s second half. To this modest story Prager has affixed a number of other oddly familiar motifs: red curtains, cowboys, oppressive synths, deliberately cheesy special effects, blue-red harmonies with that strange glow, somehow both tacky and dreamy. Prager knows exactly who she’s alluding to and wants us to know that she knows.

But to what end? One obvious but important difference between Prager and Lynch is that Lynch actually lived through the midcentury era to which his work is a kind of minor-key response. Prager, born in 1979, comes at it indirectly through pulp fiction, Eggleston photographs, and, of course, David Lynch movies. Prager is free to channel whatever influences she chooses, though her lack of firsthand experience sometimes comes across as a chilly cerebral distance from her material, an unwillingness to let it seep under the skin and into the unconscious. I felt this most strongly at the midway point of Play the Wind, when a red-dressed Keough tumbles from the sky and quick-changes into a pantsuit, and again at the end, which arrives with a sledgehammer-subtle clomp of chords. These moments are tiredly campy at best and condescending at worst.

Even Prager’s decision to cast Keough, the granddaughter of Elvis Presley, is telling. Lynch regularly bet the farm on disgraced or neglected performers who could evoke a vanished era—Dennis Hopper and Richard Farnsworth among them. Keough does for Prager more or less the same thing she’s already done for Andrea Arnold, Steven Soderbergh, and Lars von Trier: add an extratextual dash of Americana. It works, I’ll admit, but it also feels safe and thin in a way that mirrored the safeness and thinness of Prager’s show overall. Her new work shows every sign of aiming to be uncanny, but it comes off merely weird.