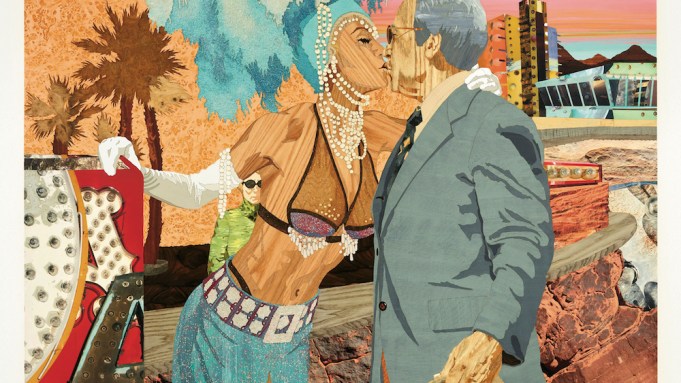 Alison Elizabeth Taylor is known for making painterly compositions using the centuries-old technique of marquetry, in which pieces of wood veneer are fitted together to form decorative designs or images. For many of the mostly Las Vegas–themed works in this striking exhibition, Taylor (who grew up in the city and knows her subjects well, including the glitzy casinos, the gaming enthusiasts, and the stark yet impressive Nevada landscape) has extended the technique into what she calls a “marquetry hybrid,” combining wood veneer, photographic images, and painted forms. These works, with their intricate mesh of colors, textures, and materials, are gorgeous. They’re also appealingly bewildering—it’s tough to distinguish between the wood, photographs, and paint, or even, at first, to decipher portions of the complex scenes.

Only Castles Burning . . . (2017) shows a colorful rock formation in the foreground. Taylor constructed it from a wild assortment of wood veneer and snippets of photographs, including images of the desert floor, marquis lightbulbs, and casino signage: this desert rock is a hypermediated version of sublime nature. Through an opening you spy a shadowy, pensive figure heading out into the desert toward a dark urban skyline way in the distance. The city looks somber and desolate, while the painted sky, shading from light orange to soft yellow, is eerie and strange, even otherworldly. In Superbloom (2017), another shadowy figure walks past a rocky form made of wood veneer and desert photos, while the unreal purple, light rose, and yellow sky echoes colors in the rocks. For all their razzle-dazzle artifice, both paintings are soulful and searching. They couple wonderment with an air of loneliness and unease.

Marquetry, which originated during the Renaissance, is most often associated with European luxury and privilege, having historically been employed for ornate furniture and opulent palaces. Taylor uses it for much humbler, decidedly unglamorous American scenes, such as a patch of land with a trailer parked beside a half-withered palm tree and with a smattering of household stuff on the ground (Solutionism: Plan B, 2017), or a ramshackle casino where a lone woman in a zebra-print shirt and a leopard-print head scarf hunkers down playing slots (Sam’s Town, 2016). While implacably melancholic, this casino scene also has an air of the marvelous. Near the woman, figures bearing trays of drinks are shown in silhouette, appearing like secular angels.

Taylor’s inventiveness abounds in The Desert Inn, 2017, a tour de force titled after the iconic hotel and casino that opened in 1950 and flourished for several decades before closing in 2000. A showgirl in a feathery blue headdress leans in to kiss a middle-aged man. She’s all outlandish femininity, with pearls, a tassel bra, long white gloves up to here, a slit turquoise skirt, and glitter galore. He’s all bland masculinity in a standard gray suit jacket, beige shirt, and tie. Around them is a reeling mix of raw nature and casino-culture excess. What look like upright buildings in the background are photographs of weathered casino signs. A curving wall seems made of sunbaked earth; the rugged ground nearby appears to be part demolition site, part desert, and part archaeological dig. Palm trees look fiery, even explosive, while the glowing sky seems to have absorbed decades of Vegas-at-night colors. The woman’s hand rests on a piece of signage studded with lightbulbs; it’s a busted remnant of a glorious heyday that has ended. Taylor’s jumbled, eye-popping broken paradise concerns a vanished Las Vegas landmark, but it could easily be a national metaphor, evoking the country’s storied past, convulsive present, and very uncertain future.