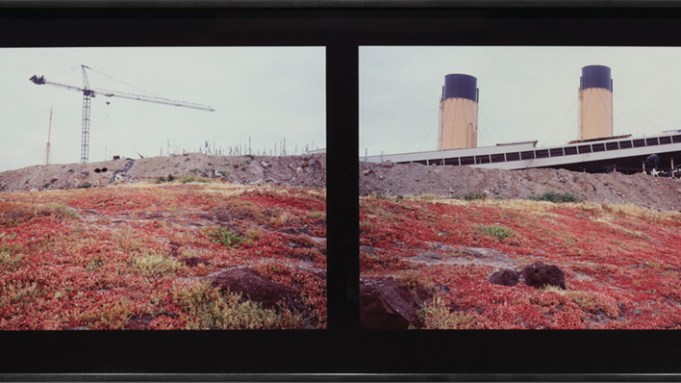 “No flash, no telephoto zoom lens, no gas mask, no auto-focus, no press pass”: in an introductory text to his slideshow Waiting for Tear Gas (1999–2000), which consists of photographs he took during the 1999 World Trade Organization protests in Seattle, Allan Sekula disavows the tools of photojournalism. He also rejects one of the genre’s defining doctrines: that a photographer should capture the decisive moment when a political event crystallizes into a single image. Sekula’s career, cut short by his death in 2013, at age sixty-two, was largely dedicated to deconstructing photography’s tendency to sensationalize, fetishize, universalize, and thereby mystify the material conditions of class struggle. How, instead, could an artist document systemic power relations, and even prompt political action through pictures without resorting to contrivance or sentimentalism?

“Labor’s Persistence,” at Marian Goodman, presented a selection of Sekula’s work from the 1970s to the early 2000s that confronted this question. The show opened with his excellent and under-exhibited This Ain’t China: A photonovel (1974), in which a narrative text printed in gallery booklets accompanies framed photographs hung on the wall. Set at a pizza restaurant in Del Mar, California, where Sekula worked while in graduate school, This Ain’t China portrays a failed revolt by the cooks and waitstaff. The crew attempts to unionize in defiance of their diabolical boss, who is depicted in noirish caricature, shrouded by cigarette smoke. Spoofing Brecht’s epithet “culinary theater”—his term for palatable dramas easily consumed by the masses—the work employs overt staging that verges on burlesque. Sekula uses spectacle to undermine, rather than reinforce, exploitative social relations under capitalism by exaggerating them to the point of absurdity.

While Sekula intended the work’s title to be a reference to the New Left’s enthusiasm for Maoism, for American viewers today any mention of China in the context of labor will inevitably evoke East Asia’s global dominance in the manufacture and export of consumer goods. Opposite This Ain’t China hung a selection of Sekula’s later works addressing the role of maritime shipping in this now-familiar paradigm of transnational exchange. Photographs from his series “Fish Story” (1989–95), “Freeway to China” (1998–99), and “Titanic’s Wake” (1998/2000) portray a longshoreman in Spain, a fish trawler in Rotterdam, and a man clearing debris from a shipwreck in Istanbul, among other workers, revealing the human motors of a global network of economic flows.

These photographs were interspersed salon-style on the wall, hanging above and below Sekula’s Untitled Slide Sequence (1972), a row of twenty-five black-and-white photographs of employees of an aerospace manufacturing plant leaving work, in homage to the Lumière brothers’ 1895 film Workers Leaving the Factory. Another work on view, Dead Letter Office (1996–97), interspersed photographs of Carnival cruise ships, Navy exercises, and the film set for the 1997 film Titanic, with depictions of Mexican seaport labor. Through these maritime false friends, Sekula stressed unsettling associations between realist depictions of the exploitation of the underclass and fictional simulations conducted by the military and the entertainment industry.

“Labor’s Persistence” is the largest East Coast presentation of Sekula’s work to date. It is shameful, but unsurprising, that the commerce-driven American art world has never given Sekula’s trenchant critical practice the recognition it deserves. Perhaps, in a year that has seen a swell of activist energy around art-institutional labor and protests against the complicity of museum patrons with regimes of political violence, this modest gallery show bodes a turning tide.