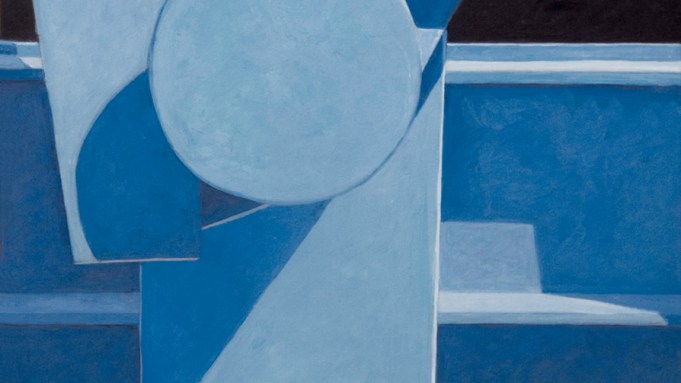 Altoon Sultan offers a highly sophisticated vision of rural life through works crafted in a wide variety of mediums: tempera paintings, gouache-and-ink drawings on hand-toned paper, porcelain relief sculptures, and textiles created by a rug-hooking method. A Brooklyn native, Sultan studied with Philip Pearlstein and Lois Dodd at Brooklyn College in the early 1970s. In many ways, her art was a reaction to the city. She first established herself with realist paintings of farms and pastoral landscapes, and her fascination with rural subject matter continued to deepen after she moved to Vermont in 1994.

Over the decades, Sultan’s work has retained the technical refinement and clarity of structure evident in her early paintings, while slowly evolving toward abstraction. This recent show featured paintings, works on paper, and porcelain reliefs produced in the past two years. Featuring delicate lines and a vibrant palette, the compositions share an intimate scale (none is larger than 13½ by 15 inches). Though they might appear wholly abstract at first, Sultan’s paintings and works on paper are thematically consistent with earlier endeavors: each depicts an extreme close-up detail of farm machinery and other equipment, such as irrigation pipes, conveyor belts, gears, and hydraulic pumps.

The focal point of the painting Blue Circle is a pale celestial-blue disk toward the upper left. The form appears to be part of a metal contraption made primarily of rectilinear components. Rendered with countless layers of feathery brushstrokes, a crisp, dark-blue shadow seemingly cast by the circular shape adds a sense of depth and even drama to the otherwise static geometric composition. Spatial ambiguity is also evident in Stepped, one of the most compelling paintings in the show. Here, a network of horizontal bands in alternating tones of chartreuse and lime green indicates a portion of a machine’s grating, or a staircase in searing daylight. Entwined, a radiant gouache-and-ink drawing, depicts two thick industrial wires emerging from geometric forms that look like metal casings. Painted on a ground of saturated deep orange-red, the snaking, sinuous wires are quietly sensual.

A press statement notes that the drawings were inspired by studies of drapery Albrecht Dürer made in the early sixteenth century. Art historical allusions, especially to Renaissance drapery studies and bronze reliefs, are also apparent in Sultan’s bas-relief porcelain pieces, which are based on photographs of folded tarps. Sultan created these rectangular compositions from carved and built slabs of high-fire clay, which she painted with numerous layers of flat matte acrylic, resulting in dense, monochromatic surfaces. The turquoise tone of Contrasting Curves and the vivid green of Angles and Dip accentuate the rich textural nuances of the surfaces, in which sumptuously undulating curvilinear forms are bolstered here and there by delicately molded shapes suggesting beams or columns. In these works, and throughout the show, Sultan creates quiet and unassuming imagery grounded in the slow pace of country life, while nonetheless demonstrating bravura craftsmanship and an exceptional command of her mediums.

What It’s Like to Compete in the Inferno, the World’s Most Treacherous Ski Race

When Does Cyber Monday Begin? Plus How To Make the Most of This Mega-Shopping Event