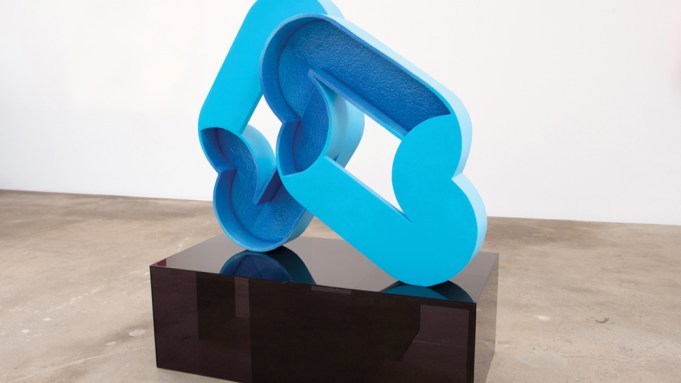 The ten sculptures in Amir Nikravan’s show (all 2018) reconfigured a so-called Eastern motif by architect Edward Durell Stone, of Radio City Music Hall and Museum of Modern Art fame. The motif is a capsule shape that repeats on various white walls in the “Persian-inspired” building Stone designed for Stuart Pharmaceuticals in Pasadena, California. Constructed between 1956 and 1958 and exemplifying midcentury modernist style, the building today provides communal and office space for an apartment complex that has been constructed around it (Nikravan first encountered the capsule pattern while working out at the gym there). Nikravan turned Stone’s motif into wall-mounted and pedestal-based objects that have the vivid colors and lush curves of Frank Stella’s “Protractor Paintings,” the restrained minimalism of Donald Judd’s sculptures, and the playfulness of Richard Artschwager’s “blps.” In reappropriating the orientalizing motif, Nikravan, an American with Persian and Mexican heritage, aims to challenge the tendency in Western art and design to turn other cultures into mere decoration.

The sculptures are plaster-and-wood structures with painted canvas vacuum-sealed to their various planes. Generally, they have circuitous, snaking forms. In some areas they look solid, and in others they are open, appearing like curved sections of steel I-beams, with winding, flat channels surrounded by flanges. Nikravan painted the canvas after sealing it to the sculptural armatures. The channels (due to the texture of the plaster underlying the canvas there) display stuccolike stippling in gradient tones, while the works’ exterior facades exhibit smooth, saturated color, resembling Ellsworth Kelly’s shaped canvases.

While all the sculptures allude to the pill-like motif from the Stuart building, the wall-hung Cocktail (Purple) and Cocktail (Yellow) do so most directly: each resembles two interlocked capsules. These candy-colored ovoids approach Finish Fetish in their precise symmetry and clean forms. The other sculptures stray further from the quoted motif, extending its lines or turning its curves this way and that to create the aformentioned twisting forms. Often, these forms suggest plumbing—sometimes even of the bodily sort. Conversation Table, Blockage, and Inversion Therapy, for instance, are vaguely intestinal forms painted in peach and pink hues. Their cold, black plexiglass pedestals only throw the corporeal quality into further relief.

Interference Flow, a wavy orange-colored wall piece, resembles a cartoon worm with its head and tail chopped off. Its title seems to hint at Nikravan’s desire to disrupt historical apparatuses of cultural appropriation and simplistic dichotomies like those of East and West. But Nikravan’s works seem somewhat muddled in this regard. One thinks here of the exhibition’s title. “World of Interiors” likely alludes both to the pharmaceutical and bodily themes of the work and to the interior design magazine. And ultimately, these objects could look at home in one of the spaces featured in such a forum. They seem like high-end products whose polish overpowers any subversive intent.