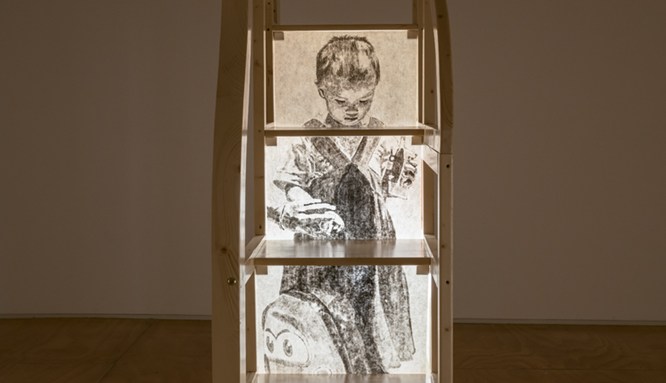 Launched in 2003, Taobao has become China’s leading e-commerce platform. It has allowed significant numbers of people to start their own successful businesses—whether selling goods on the website or developing services that cater to online retailers—and is even credited with providing certain rural populations the means through which they have brought themselves out of poverty. In 2017, artists Amy Lien and Enzo Camacho traveled to China, where, in the city of Yiwu, they visited a family-run photo studio that produces marketing photos for products sold online. Comprising a documentary video and various sculptures (all 2018), the duo’s exhibition at Chinatown gallery 47 Canal took as its departure point the photo shoot they attended there.

The video, Mother Holding Taobao Child, features footage of the shoot, which was for various kids’ products—bunk beds, backpacks, toy trucks. As the child models get distracted, their parents instruct them to pose more convincingly. (“You’re not concentrating,” one mother tells her two-year-old son.) In a statement accompanying the show, the artists, making reference to cybernetic theorist Gregory Bateson, describe how parents’ communicative signals relaying professional and familial obligations can sometimes create a double bind for the children, in which satisfying one type of obligation risks failing to meet the other.

Uneasy relationships between parents and children are further explored in the sculptures. The largest work in the show, Mother-Child Bed (Space is the mother), consists of a type of wooden bunk bed featured in the video—a model that has been especially popular on Taobao and that allows mothers to sleep on the lower level with their children above them. On the upper railing of Lien and Camacho’s sculpture, a clip-on pair of plastic eyes conceals nanny cams. Footage from those cameras is projected onto the bottom bunk, displaying views of the sculpture and suggesting an adaptation of omnipresent surveillance to the home life of children. Lying on the bottom bunk are rice-paper drawings Lien and Camacho made of smiling mothers—the human face of this disciplinary apparatus.

Rice-paper drawings also appear in three sculptures titled Orphaned, where they are affixed to the exteriors of the sort of staircases found on the bunk beds and are illuminated by lights within the wooden structures. Along each staircase is a portrait of one of the children from the photoshoot. The image is segmented along the steps, so that the child appears whole when viewed head-on, but fragmented when considered from an angle. Installed on the opposite ends of the staircases are drawings of sculptures: one by Lien and Camacho and the others by Anicka Yi or Amy Yao, both of whom also show at 47 Canal. The sculptures are portrayed as analogues for the children. Indeed, they belong to a system, 47 Canal, that operates as both a business and a familial structure, that has made significant efforts to involve Asian American artists in a kin-type network.

How, the artists seemed to ask throughout the show, do circuits of international trade shape materials, practices, and people? Commodities—whether toys or artworks—lose and regain functions as they change contexts. Rather than existing as static objects, Lien and Camacho’s works appear to be perpetually reconstituting themselves and recombining with one another, taking on new functions, continually adapting.

I Tested and Loved This Premium Smart Scale, and It’s Just $66 for Black Friday Weekend