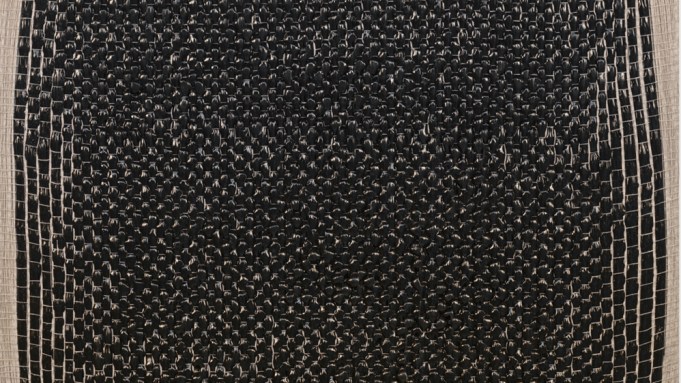 What is painting good for? That simple question has proved remarkably durable since the 1980s, when the medium’s demise was so confidently proclaimed. Few artists have proposed quite as many different answers as Analia Saban. Her breakthrough work of 2005, The Painting Ball (48 Abstract, 42 Landscape, 23 Still Lifes, 11 Portraits, 2 Religious, 1 Nude), comprises 127 found paintings unpicked and wrapped up like twine into a giant sphere, as if to entertain the world’s largest cat. Saban has been unspooling the implications ever since. Over and again, she has reconfigured the constituent elements of painting: woven threads, pigment, binder, and surrounding space.

“Punched Card,” her exhibition of new work (all 2018) at Tanya Bonakdar Gallery, offered the material ingenuity we’ve come to associate with the artist. Saban has devised a way to weave with acrylic paint, extruding it into ropelike strands, allowing it to solidify (it is, after all, plastic), and then working it directly into linen canvas. In Transcending Woven Vertical Line (Black), she used only a single “yarn” of paint, leaving its tail to dangle beyond the canvas’s bottom edge like a dried drip. In Woven Grid As Warp and Weft (Black), she wove the acrylic cords into the support in grid formation, producing a composition that summons equally the history of abstraction and the aesthetic of kitchen linens. [Black] #1 features dark vertical “warps” of paint spreading out slightly, pushing the linen into gently graduated curves: Malevich’s Black Square taking a breath.

The show also included works from Saban’s “Flare Up” series, in which she lays a stretched linen canvas flat and pushes paint through from the back. Depending on the pressure she applies, the paint might just bead up on the front surface or it might form a more diverse landscape. These pictures index nothing but their own making, yet they read as information: the staccato rhythms of Morse code, or wave-forms like the ones Peter Saville put on the cover of Joy Division’s Unknown Pleasures.

The complex relationship between materials and data was, in fact, the principal topic of the exhibition. Saban’s grandest gesture was a suite of works made using the aforementioned paint-weaving process that hung from the gallery ceiling like banners. Each has a corresponding “pleated ink” painting. To make these latter pieces, a laser-cut pattern was dropped into a shallow well of ink; the fluid formed a meniscus in each of the pattern’s gaps, then was allowed to dry, shrinking into tiny wrinkled whorls. The imagery in this section of the show was based on particular computer chips that have been significant in the history of digital technology; for example, Tapestry (1,024 Bit [1K] Dynamic RAM, 1103, Intel, 1970) depicts the first chip that was capable of holding a kilobyte of data. In computing terms, of course, this is ancient stuff. These chip portraits register as memorials to an already distant past, when the inner workings of digital technology were large enough to be evident to the naked eye.

The exhibition title prompted one to go further still, all the way back to Ada Lovelace and Charles Babbage, who adapted Jacquard loom punch cards to their pioneering “analytical engines.” The Frankensteinian trajectory this invention set into motion, in which the digital seemed released from the analog, taking on a potent and unruly life of its own, is the backdrop for Saban’s works. I thought of the textiles of Anni Albers, who was inspired by ancient Peruvian weavings and sought to recover the techniques encoded in them for modern use. Saban is traversing the same tangled matrix, in which materiality and information are caught up in each other. Follow the thread, and see just how deep the rabbit hole goes.