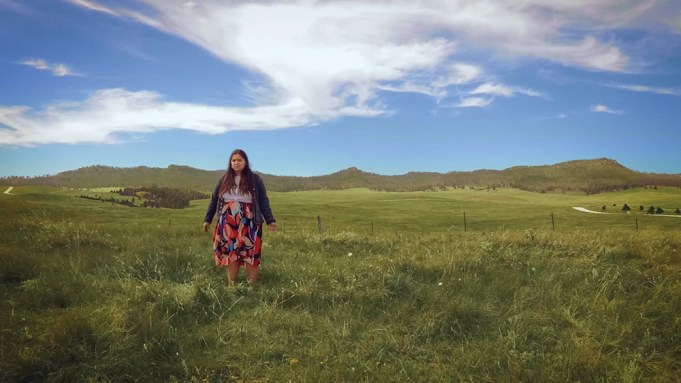 Andrea Bowers’s interest in social movements and political activism, such as workers’ rights rallies and protests around the proposed Dakota Access Pipeline, is central to her artwork. This can lead to some dissonance in commercial gallery settings. A 2011–12 exhibition of her work at Andrew Kreps took as a departure point The New Woman’s Survival Catalog, a 1973 compendium of practical information for women in the United States, including details about women-run bookstores, health clinics, and other services. Artforum critic Frances Richard criticized the show for a contradiction she saw at the heart of it: visitors were not allowed to look unsupervised through a book of ephemera placed on a table, and this seemed anathema to the egalitarian spirit of the material. Turned into fine art, it had become hands-off.

One Work: Andrea Bowers's "Letters to an Army of Three"

Bowers’s latest show at the gallery, “Think of Our Future,” wasn’t free of such issues, but the central video, My Name Means Future (2020), certainly helped transport viewers away from the esoteric white-cube context. The protagonist is a teenage member of the Standing Rock Sioux Tribe in South Dakota named Tokata Iron Eyes. Her unassuming, seemingly unrehearsed demeanor lent the video an accessible quality. In drone footage, Bowers recorded Iron Eyes describing some local landmarks sacred to her, as well as her background as a young Indigenous rights activist. Standing in the unremarkable rolling fields that constitute the site of the 1890 Wounded Knee massacre and mass burial ground, Iron Eyes mentions that one baby survived the slaughter to become her great-great-grandfather. Bowers’s camera variously zooms in on Iron Eyes’ face, swoops around her from afar, and frames her silhouette within wide shots of the surrounding landscape.

Describing her philosophy on nature—it can’t be owned, and every object has its own autonomous life force—Iron Eyes pauses to collect her thoughts, smiles awkwardly, and gesticulates in the relentless prairie winds. She wears a T-shirt that reads PHENOMENAL WOMAN—a costume choice that feels authentically her own, even if it aligns with themes in Bowers’s past work. The video offers a tender, selfless portrait of a woman Bowers considers a model for future political engagement.

Hung on the walls around the video projection were new neon pieces in which curling, glowing green depictions of sycamore branches surround “ecofeminist” quotes. One spells out, THE EARTH DOES NOT BELONG TO US / WE BELONG TO THE EARTH, a message commonly found on bumper stickers made by Earth First!, a radical environmental advocacy group, while another work features a spreading branch with a statement tweeted by Honor the Earth executive director Winona LaDuke: LET US BE THE ANCESTORS OUR DESCENDANTS WILL THANK. While these neons are lovely, they seemed decidedly commercial in comparison to the video—like bright, shiny baubles tailor-made for the living room wall. Downstairs, meanwhile, were two large acrylic-on-cardboard works that reconceive historical illustrations of women. One is based on an image by writer and artist Walter Crane for his poem The Sirens Three (1886) that depicts three women swirling around a sailboat motif. Bowers recast Crane’s illustration as an indictment of climate change, swapping in a desiccated landscape for the boat and turning the globes the women hold into representations of a dying planet Earth. While this and the other two-dimensional objects in “Think of Our Future” were well executed, they seemed secondary to the video, which was given rightful pride of place: earnest and optimistic, it unfolds slowly, wrapping viewers in a narrative that’s mournful and hopeful at once.