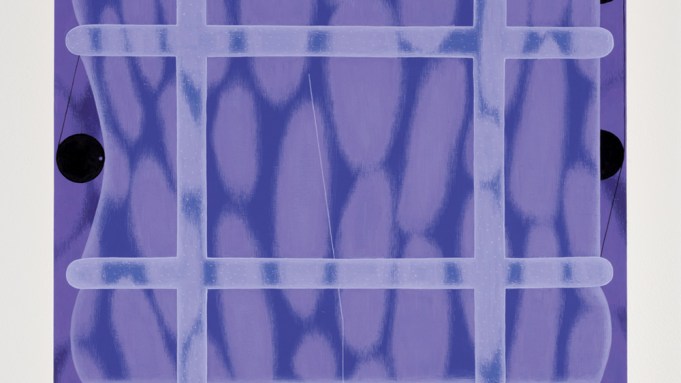 The thirteen gouache paintings that Angela Heisch exhibited at 106 Green (all 2018 and on muslin over panel) suggest the aesthetics of 1970s interiors, slightly wonky architectural diagrams, and bold-hued camouflage patterns. The compositions consistently manage to picture two opposing things at once: nature and the built environment, inside and outside (of what remains unclear), windows and impassable surfaces, aerial views and head-on glances into a scene. Despite or because of Heisch’s almost steely technical precision and exacting brushwork, it is hard to pin the paintings down. Just when one of them appears to resolve into a coherent whole, a previously unnoticed gentle arc, subtle pattern, askew line, or formal echo disrupts that coherence, keeping us thinking and looking.

Heisch establishes compositional rhythms using a particular vocabulary of forms. Almost all the works bear one of two canvas-spanning motifs: a post-and-lintel arch or, evoking a radiator seen from above, a thick stripe with protuberances extending from either side. Some of Heisch’s  titles—such as Slip in the Sky and Swimming with Gold Hoops—elicit nautical associations, but her forms float free of gravity, implying otherworldly seas. Painted in varying concentrations of a single dusky hue—umber, deep red, midnight blue, mustard yellow—the works’ palest passages read like shaped panes of frosted glass, both revealing and partially concealing patterns of moons or feathery forms below. But Heisch’s foregrounds do not stand neatly apart from their backgrounds; instead, lines sneak off to weave in or out of their neighbors, knitting together the whole despite markers of spatial depth. Matey appears to show a diaphanous fabric flattened beneath a tic-tac-toe matrix floating in front of the canvas. This grid does not function as a signifier of flatness but rather cancels out one’s ability to measure or map the depicted spaces in any real way.

Deep matte black shapes in the compositions suggest velvety portals so deep, dark, and absorptive that seeing into them is impossible. But these blind spots operate in tandem with the sense that the paintings somehow emit light from within their representational fields. It is yet another tension found in Heisch’s work, which insists on a realm in which ostensible opposites coexist.