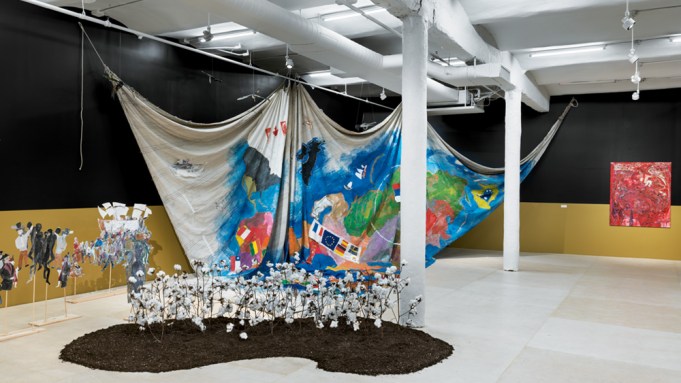 Anna Boghiguian’s exhibition at the New Museum,“The Loom of History,” offered a passionate treatment of today’s most contentious issues, such as immigration, economic inequality, and the legacy of colonialism. The show, which featured mostly works made in the past couple years, was housed in a single gallery. The walls were painted black from about four feet up and dark yellow below; in certain areas, the black section was covered with long passages of text handwritten by the artist in yellow paint—a theoretical explication of the motley assortment of works on view, which included drawings, collages, sculptures, and tableaux of paper cutouts.

Among the most memorable pieces was Woven Winds / The Making of an Economy—Costly Commodities (2016), a sequence of twenty-seven drawings, displayed on a single shelf, illustrating the rise of the United States as an economic superpower. The narrative begins with an image of a human brain and handwritten commentary on history, progress, and reason. Following this, the loosely chronological work includes a portrait of Columbus with some notes on the European slave trade and the discovery of America; a brief account of the Dutch purchase of Manhattan from Native Americans and of the island’s subsequent seizure by England; and a black-and-white portrayal of African slaves marching in chains. We encounter Alexis de Tocqueville, Eli Whitney’s invention of the cotton gin, a poem by Walt Whitman concerning dead soldiers. Like a propaganda film, Woven Winds puts forth a montage of carefully selected scenes and compelling visual metaphors to convey a specific political message: the economic and political dominance of the United States is built on human suffering, crime, and war, and this dark history is still present with us today.

Boghiguian further fleshed out this message in a dramatic installation that shares the drawing sequence’s title and that was placed beside a patch of dirt with some dried cotton stalks thrust into it. Rendered in quick, expressive brushstrokes on paper cutouts affixed to poles are ten historical scenes, ranging from slaves laboring in a cotton field to workers and spinning machinery in a cotton mill to a crowd of immigrants disembarking from a ship. Shown nearby were several separate cutout works that bring Boghiguian’s history up to date—one, for instance, depicts a crowd of protesters holding signs and banners bearing statements like FOREIGNERS ARE TERRORISTS and OUR COUNTRY FOR OURSELVES (Demonstration, 2017). In such works, Boghiguian excoriates the populism, nationalism, and xenophobia taking over many Western democracies.

The history of migration has personal significance for this septuagenarian artist, who was born in Cairo into an Armenian family that had moved to Egypt in the early 1900s. Her own life has been nomadic. Since studying political science in Cairo and art and music in Montreal, she has traveled extensively around Europe, Asia, and the Americas. These journeys seem to be integral to her work, much of which she makes on the road. The extensive didactics with which she frequently pairs her imagery—such as her wall writing at the New Museum—tend to be dry expositions that draw on historical, philosophical, and sociological sources. The imagery, however, reveals a deeply personal, slightly eccentric poetics that undermines and complicates her texts’ ostensibly impartial, analytical character. Her work is at its strongest when it captures the anger, empathy, and sorrow she clearly feels when faced with the scenes of injustice and suffering unfolding around the world.

Always Wanted to Live on the Slopes? This $100 Million Colorado Mansion Is Built Into the Side of Aspen Mountain

F1 Live Stream: How to Watch the Formula One Racing Season Online