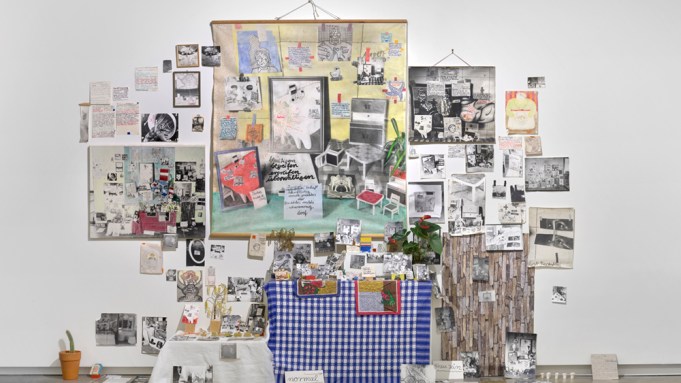 The most immediate aspect of the German artist Anna Oppermann’s work is its insistent and compulsive weirdness. In the late 1960s, Oppermann, who died in 1993 at the age of fifty-three, began creating works she called “Ensembles”: early examples of installation art consisting of drawings, photographs, paintings, and household objects arranged in dense, overlapping constellations that spread across gallery walls and floors, and that took as their central theme the conditions of being a woman and an artist. Oppermann saw her Ensembles as permanently unfinished and endlessly preparatory, often circling back to a given installation over the course of several years. Her work, which has rarely been exhibited outside Europe, was often received harshly by critics during her lifetime, but today it seems ripe for reappraisal as a feminist project reclaiming the domestic sphere as philosophical and aesthetic territory.

This exhibition, the first of Oppermann’s work in the United States since 1999, highlighted her drawings from the ’60s and early ’70s, which she made while developing her early Ensembles. Oppermann, who studied philosophy before taking up art, treated still lifes as metaphysical investigations, depicting not only domestic mundanities like ashtrays, potted plants, aprons, and curtains, but also the process of perceiving them. The ordinary household objects in the drawings become ecstatic instruments, the kitchen tables presenting uncanny tableaux. It’s difficult to parse where the external world ends and Oppermann’s interior landscape begins.

One untitled drawing from 1970 shows a downward view of a woman standing in front of a kitchen table with a mirror at its center, the tablecloth a flat white expanse. Her aproned torso and small feet occupy the lower half of the composition, with a wavering white void indicating the top of her head. Compressed by extreme foreshortening, the forms of her body and the table echo one another to suggest two parts of a whole, as if the borders between self and other have dissolved into a hallucinatory whorl.

Oppermann’s tablescapes are often riddled with mirrors and windows, refracting and multiplying the objects depicted. In Beans (1968), for instance, a dish of green beans sits on a yellow tablecloth whose wrinkles resemble cranial folds, while a mirror displaying a magnified reflection of the beans hovers above. Another untitled 1970 work depicts the artist from behind as she bends over her makeup mirror on the table. Her form is doubled in the foreground as an inflated silhouette superimposed onto the scene. The outline of her head encloses an enlarged version of the mirror, which bears a reflection of her polka-dotted curtains and houseplants.

One Ensemble, Being a Housewife (1968/73), was included in the exhibition. Resting on a low table draped with a checkered tablecloth were cutouts from found cartoons, a potted anthurium plant, and dollhouse miniatures. Handwritten notes, drawings, and photographs were haphazardly pinned and taped to the wall behind the table; others were spread out on the floor. Many of the drawings and photographs depicted the Ensemble itself, replicating its elements from different perspectives to produce a mise en abyme. Suggesting a folk altar or a crowded mood board, the work is concerned less with formal organization than with the unruly display of information in all its overabundance.

In a 1982 review in Der Spiegel, a critic dismissed Oppermann’s Ensembles as “not exactly profound, but assembled with monomaniacal diligence.” There is indeed an obsessiveness laid bare in these works, with their sprawling, grandiose displays of personal talismans, notes, and sketches—but their profundity lies in this very excess. Rejecting the expectation that women present tidy appearances and take up as little space as possible, Oppermann’s work feels subversive in its messiness.

Brendan Fraser Deserves an Oscar for ‘The Whale.’ He Also Deserves a Better Movie