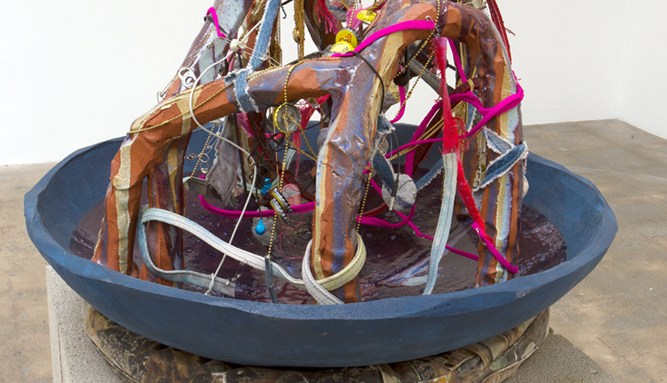 Since the late 1990s, Anna Sew Hoy has developed a sculptural, largely ceramic language centered on forms suggesting amoebas, heads, planets, caves, and hives. In this show, “The Wettest Letter,” she introduced two new elements: functioning birdbaths, and wall-mounted pieces whose peculiar appearance evokes—at once—shields, human chests and pelvises, and furnishings like sconces and coatracks. Familiar yet alien, Sew Hoy’s sculptures are oddly alluring, and have a formal logic all their own.

Among the wall pieces was Cheeky Kid (all works 2019), a pinkish kidney-bean-shaped object bearing two open domes that read as malformed breasts. Lemony-yellow globs protrude from their openings like tongues. Linking these two forms—and recalling the hanging strands in some of Eva Hesse’s works—is a thin strip of brown suede wrapped in a 1980s-looking perforated pink suede. Sew Hoy’s frequent use of such outmoded materials enhances her sculptures’ appealing awkwardness. The central portion of Blood Moon Breastplate is covered in a red flock that conjures dated interior decor and Hugh Hefner’s velvet smoking jackets, while faux-leather components resembling scrunchies, those hair accessories of yesteryear, encircle two slender pieces reaching up like fingers or hooks from the work’s bottom. According to a 2016 profile of Sew Hoy in Cultured magazine, the artist’s father, an orthopedic surgeon, gave her hip replacement parts to play with as a child. It’s easy to imagine those as inspiration for these works, and as a foundation for her uncanny bodily aesthetic.

Two birdbaths, Wettest Letter I and Psychic Grotto Birdbath, First Position, were installed in the gallery’s courtyard, while two similar works were exhibited inside. In interviews, Sew Hoy has expressed disdain for the kind of right-angled enclosures found throughout our built environment, from the office cubicle to the white cube. Featuring wide basins topped with fanciful arcs, her birdbaths perhaps model the type of space she prefers—open and inviting, but protective and sustaining.

The exhibition’s title came from a riddle that ceramic sculptor Liz Larner posed in a talk at Frieze Los Angeles: “What is the wettest letter of the alphabet?” The answer is “C.” Like the sea, this letter, with its homophonous quality and its usage for different sounds, has a mutability to it. Sew Hoy’s sculptural world is an indefinite space where something old can appear new, the conventional can suddenly seem strange, and the inviting can turn repellent.

The artist’s emphasis on shape-shifting is well suited to her clay medium, which can be malleable and fragile as well as hard and durable. A pair of oval black-tinted mirrors in the show, Thrown Shade I and Thrown Shade II, in which the viewer’s reflection is not only shaded by the surfaces’ hue but also partly obscured by pieces of fabric, seems to propose that certainty and clarity are not always ideal. Sew Hoy’s work puts forth a vision for humanity and the spaces we inhabit in which there are no oppressive categories, no definite confines, and borders remain porous.

Bombardier Unveils the Fastest Business Jet in the World, Its New Global 8000 Flagship