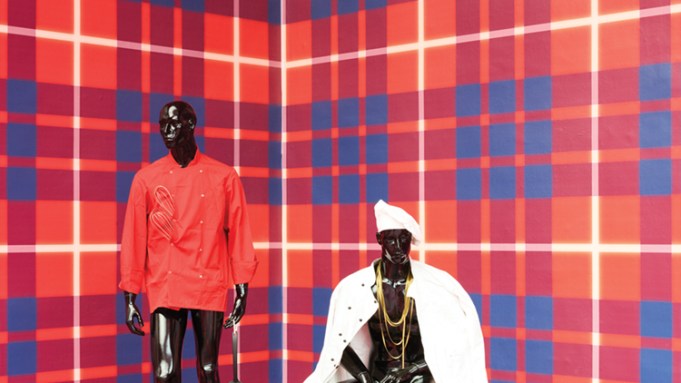 Most artists exhibiting in the Secession’s main gallery leave the space a perfect white cube. Not Anthea Hamilton. For “The New Life,” her first solo exhibition in Austria, she covered the floor, walls, and ceiling of the room in a dizzying large-scale tartan pattern in red, blue, and purple: the Hamilton tartan. The patterning gave one the impression of having walked into a setting from an early video game or a scene from a David Lynch movie. Its gridded quality—which echoed that of the ceiling lights and the rectilinearity of the architecture—also highlighted the nature of the gallery as a sort of stage defining where and how artworks should be displayed. Playing with such logic, the Turner Prize nominee populated the space with surreal, humorous sculptures and assemblages.

Three giant fabric butterflies appeared to have alighted on the walls, while a fourth, perhaps having crashed, lay at the foot of a steel sculpture resembling a hashtag. A plump stuffed moth—the butterflies’ homelier cousin?—slumped against a wall, as if it had gorged itself on too many clothes (Cloak Moth, 2018). Themes of food and fashion commingled throughout the show. At the entrance was a work in which a life-size cutout (from a 1973 Helmut Newton photograph) of a young singlet-wearing Karl Lagerfeld reclining on a bed is set on a pedestal with a mound of buckwheat and a row of Désirée potatoes (Karl Lagerfeld Bean Counter, 2012). The work comically alludes to different types of hunger, while also (in a perhaps related way) suggesting a kind of exposure therapy—an attempt to rid the fashion icon of a fear of carbs. Standing in different parts of the gallery were four black mannequins decked out in combinations of chef attire, street fashion, haute couture, and fetish wear (Vienna Chefs, 2012/18). Among the garments and accessories: chef coats and a latex jacket, soup ladles and whisks, noodle necklaces and hip-hop-style gold chains.

The mannequins’ color seemed to some extent a comment on race. Hamilton is black and does not belong to the Scottish clan whose tartan she used. That she placed her works against this plaid gave way to thoughts about British traditions and how people of color fit into them, or don’t, as well as to questions of who gets to appropriate whose culture. That said, Hamilton was recently quoted in the Guardian as saying that while her art and her personal life do overlap, she’s resistant to having her work read in biographical terms, since she prefers to keep it open to varying interpretations. “I push for ambiguity,” she said elsewhere. Indeed, the installation did not seem intended to be an especially specific critique. It read mostly as an amusing mise-en-scène that poked fun at the fashion industry’s various obsessions (with unrealistic body ideals, with fad diets, with unusual accessories) and explored themes of transformation (via, for instance, the butterflies; the appropriated objects and pattern; and the hashtag sculpture, which suggested a tilting of the hallowed Minimalist grid). While one might have wished for a stronger point or clearer meaning, it was nonetheless pleasurable to wander through the curious installation searching for clues to decipher and taking in Hamilton’s cheeky juxtapositions.