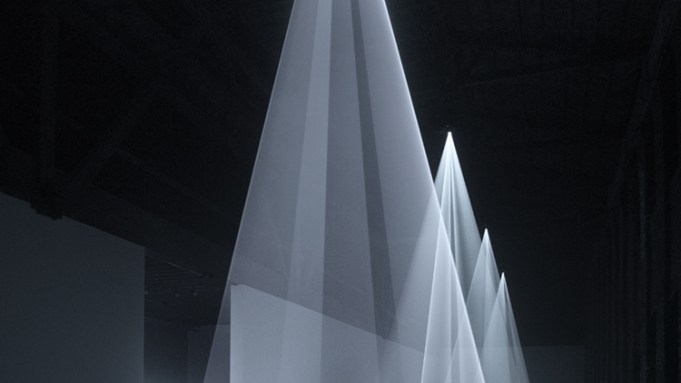 Installed as part of “Dreamlands: Immersive Cinema and Art, 1905–2016,” an exhibition on view last year at the Whitney Museum of American Art in New York, Anthony McCall’s Line Describing a Cone (1973) pulled spectators into a black vortex through the force of a beam of light. In this silent work of expanded cinema—a horizontal projection in a black box—the image is reduced to almost nothing: a curved line that slowly forms a circle on-screen. But as the projector’s beam travels through a dark, fog-filled room, it illuminates areas of the haze, creating ephemeral three-dimensional forms. More elaborate and colorful works by Oskar Fischinger, Stan VanDerBeek, and Hito Steyerl positioned nearby did not have the same captivating force as McCall’s single beam of white light.

Spectators went toward that light, interrupting it as it traveled to the screen. Their shadows obscured the image of the endlessly looping circle. Line Describing a Cone, McCall’s best-known work, is a radical expression of cinema without narrative. Yet, like any good movie, it captured spectators’ attention—even if, when they shuffled in, the credits seemed to have already rolled.

In a movie theater, of course, the projector beam is overhead and usually ignored. Standing next to the light cast by such an apparatus—or in that light—accentuates its brightness and physical presence. In “Solid Light Works,” McCall’s current show at Pioneer Works in Brooklyn, the monumentality of the light beam is underscored by the huge space of the blacked-out gallery in a hangarlike warehouse. Here, four works by McCall are projected vertically from the ceiling to the floor. The thirty-foot light beams create tented structures made visible by the glycol fog pumped into the atmosphere. The beam has a dimensionality the spectator experiences differently than in McCall’s horizontal works (two variations on Line Describing a Cone are also on display). The line projections on the dark gray carpeted floor slowly move, and as they do the projector beams illuminate what appears to be an interlocking series of smoke walls. Their movement is barely perceptible. Stand close enough and you can see the black opening up before you between the walls of haze, beckoning you into . . . where?

Stepping into the void created by McCall’s projections can evoke a variety of narratives. To be directly under the projector is to be caught in the tractor beam of a spaceship. The wandering shadows of other people as they make their way through the gloom lend the space a post-life feel, turning it into a Dantean purgatory.

McCall emerged in the early 1970s from the London Film-makers Co-operative, where Malcolm LeGrice, Lis Rhodes, Peter Gidal, and others theorized Structural/Materialist film into existence. Adversarial and Marxist, the Structural/Materialists sought to dismantle and eliminate the ideologies of narrative cinema, up to and including the romantic impulse of avant-garde film and its artists. McCall dropped his practice for twenty years (in part because his work was not commercially viable). He resumed it in the early 2000s, using digital projections instead of 16mm film.

“Structural/Materialist film attempts to be non-illusionist,” Gidal wrote, trying to define it in 1975. “The specific construct of each specific film is not the relevant point; one must beware not to let the construct, the shape, take the place of the ‘story’ in narrative film. Then one would merely be substituting one hierarchy for another within the same system, a formalism for what is traditionally called content.” Anti-content is a position to rally around in these days of all content, all the time. In his “Solid Light Works,” McCall has created something that reflects the nebulosity of our time: an illuminating environment of dark night, harsh angles, and undulating line forms.