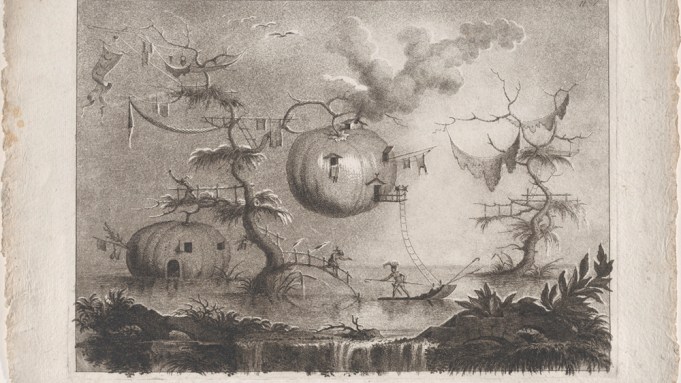 Walt Whitman was wrong. The speaker in his 1865 poem “When I Heard the Learn’d Astronomer”—presumably Whitman himself or his proxy—recalls tiring of a science lecture and wandering off to stare at the glorious night sky. It’s a prejudice as hoary as the figure of the wise, weary poet: charts and diagrams suffocate; art and nature glisten with life.

The Met’s exhibition “Apollo’s Muse: The Moon in the Age of Photography” does many things right, but its greatest accomplishment is to purge us of that prejudice. Moon maps and astronomical treatises don’t dull our sense of wonder; they’re triumphs of the imagination, as indebted to Jules Verne as they are to Galileo. These and other lunar artifacts have been organized into five main sections: on astronomy; on the moon in fiction; on the Apollo 11 mission, whose fiftieth anniversary prompted the show; and so on. The exhibition is most successful, however, when these themes dissolve into one another, when studying the moon is indistinguishable from fantasizing about it.

Some of the most beguiling pieces date to the era of Whitman’s poem, when the camera hadn’t quite replaced the human hand as the main tool of scientific documentation. The first lunar daguerreotype, taken by John William Draper in 1840, could almost be a late Georgia O’Keeffe—nacreous layers curling around a white orb. It would be more than a decade before photographic exposure times were short enough to capture the moon’s rills and craters in much detail. Long after crisp albumen silver prints of the moon’s surface had become old hat, astronomy depended on a combination of scientific objectivity and artistic panache. In 1884 the Pre-Raphaelite painter and Royal Astronomical Society member John Brett completed a chalk drawing of Gassendi’s Crater. Even though he’d modeled the work on careful telescopic observation, his thick, kinetic strokes wouldn’t be out of place in the Caspar David Friedrich painting hanging in the following room, Two Men Contemplating the Moon (ca. 1825–30). Romanticism and astronomy flourished throughout the nineteenth century, and the moon was their common obsession.

But for everything “Apollo’s Muse” reveals about the heights of human ingenuity, it also produces a nagging sense of disappointment. This may have something to do with the fantasies of domination that—based on the evidence assembled here—have always underlain our view of the moon. White Europeans made the vast majority of pieces in the show, and the astronomical techniques they pioneered, it’s worth remembering, were also the ones that allowed empire-builders to cross oceans and divide uncharted lands into conquerable pieces. In a whimsically sinister image dated 1766–67, engraver Filippo Morghen depicts a lunar landscape populated by half-naked savages in need of civilizing—a fun house-mirror version of the way Christendom saw the rest of the world.

The culmination of the moon shot–as–missionary work was, naturally, the space race. It’s perhaps inevitable, given the show’s occasion, that the most arresting piece on view is a murky film of Neil Armstrong on the moon, watched live by some five hundred million people. The moon landing was billed as a triumph of the American way of life, though no politician at the time dared to mention the real reason the United States government was spending billions on the project. Fifty years later, with the space race over and no clear military or financial rewards to reap, the US lacks a strong motive for moon exploration. That sense of aimlessness is echoed in the exhibition’s final section, which surveys lunar art made since 1969. It contains clever jokes, postmodern puzzles, juvenile navel-gazing, allusions to conspiracy theories, and almost no images of the moon. It’s tempting to quote Easy Rider, another 1969 film about an all-American quest that didn’t quite live up to its revolutionary potential: “We blew it.”