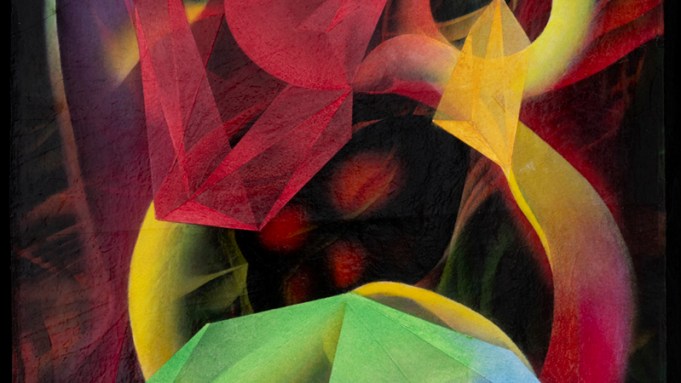 What might Paulina Peavy’s art have looked like if she hadn’t attended a séance led by the spiritualist pastor Ida Ewing in Santa Ana, California, in 1932? A recent divorcée with two children, she had taken classes at the Chouinard Art Institute in Los Angeles and was teaching art in local public schools. There’s scant evidence of her work before that fateful séance, during which Peavy claimed to have encountered an amorphous collective being from the future, or, as she termed it, a UFO, named Lacamo. For the next fifty years, until her death in 1999, at age ninety-eight, she felt impelled to create artworks that explored in visual terms Lacamo’s revelations. Andrew Edlin displayed a handful of these works in 2016, but the recent show—curated by Bill Arning and featuring nearly thirty paintings; six beaded and bejeweled masks, which Peavy wore while in the creative trance state; and her 1985 short film The Artist Behind the Mask—was much more extensive. The exhibition also credited Lacamo as a collaborator of Peavy’s, whereas the former one barely mentioned this driving force of her work at all. It’s an interesting development that can be seen in light of the fresh attention being given to artists, such as Hilma af Klint and Agnes Pelton, who used various forms of spiritualism to guide their work.

The teachings Peavy gleaned from Lacamo were radical and elaborate, beginning with a reinterpretation of the Bible as a scientific document detailing genetic evolution and centering on a 12,000-year cyclical life span of the human race, the peak of which is an era of androgyny and a cultural perfection modeled on ancient Egypt. “There are no hospitals, grocery stores, jails, or even signs of abdominal pregnancy,” Peavy writes of this apogee in her unpublished two-hundred-page book My Life with a UFO. The future is genderless, and the male sex represents the nadir of the cycle: “an age of male devised wars, rapes, and the male-devised ‘governments’ supposedly for ‘the people.’”

The paintings withstand the weight of so much supposition; they are revelatory as formal experiments as well as conceptual ones. The show began with twenty small ink-and-watercolor abstractions mostly from the 1970s and early ’80s, with one outlier from 1953. These are startling compositions of vivid color and contrasting forms linked by dynamic geometric networks of thin Letraset lines. Some of them recall Joan Miró’s biomorphism or Arthur Dove’s rhythmic evocations of the natural world; others seem more closely aligned with the spirographic drawings produced in the early years of computer art. They offered the exhibition’s first hint that Peavy may have followed Lacamo’s instructions but was master of her materials.

A number of paintings on view carried not only two signatures—Peavy’s and Lacamo’s—but also two dates. These works were begun in the period of the 1930s to the 1960s and then modified around 1980, as Lacamo’s teachings became more elaborate. In a trio of oil abstractions made according to this process, diaphanous geometric and curvilinear forms layered atop one another recall the revealing folds of fabric that appear in Renaissance art; they float in the depthless, darkened field of the works, translucent forms with shape but no body. In a quartet of larger paintings, figures emerge from this type of fluid abstraction, as if from a generative bath. Androgynous faces, rendered in an Art Deco style, and floating hands materialize from spiraling, concentric, and pulsing waves of color—kaleidoscopic representations of the frequency on which Lacamo existed. Communicating from what Peavy called a world “beyond our mortal sense perceptions,” Lacamo imparted information in the form of pictures in order to introduce that world to ours. Peavy was receptive. “I had gotten on a beam,” she wrote, “I had tuned in on a power vast and wonderful.”