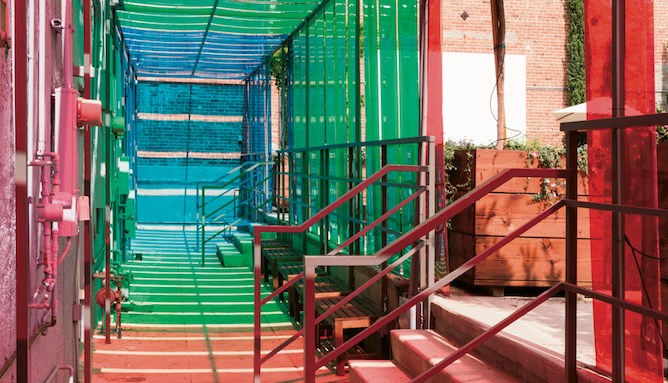 “Artists of Color” did two things bravely. First, it presented rooms of geometric abstractions, monochromes, and color fields from the likes of Josef Albers, Imi Knoebel, and Jo Baer—the sort of unabashedly pretty pictures that some viewers might dismiss as aloof or a sham. The second was to force the question of what it means to be an artist of color while allowing for ambiguous, complicated answers. The Underground Museum, a nonprofit space in central Los Angeles supported in part by the city’s Museum of Contemporary Art, made excellent use of the conventions of museology to examine this relationship. Wall labels featuring quotes from the artists accompanied nearly every piece, contextualizing the works at the intersection of art history and politics, where color lives.

Case in point was 2004 (1), 2008, an unprimed square linen canvas featuring a purple quadrilateral of house paint. The work was by exhibition curator and Underground Museum cofounder Noah Davis (1983–2015), whose organizational plans for “Artists of Color” were realized posthumously. The wall label for Davis’s work included two quotes by him. In the first, he seemed to wave away all deeper meaning, admitting that sometimes the work “really does come down to color.” In the second, however, he set the word “color” spinning, noting that “Purple is to black people what Yves Klein’s blue is to white people.” Displayed nearby was Joe Goode’s Purple (1961–62): a royal purple painting in front of which stands a royal purple milk bottle. The juxtaposition of Davis’s and Goode’s works highlighted formal similarities—both pieces make use of square canvases and a purple hue—but also seemed to complicate Davis’s own statement by highlighting a marked difference between the artists: Goode is white and Davis black. The one “International Klein Blue” work in the show, Sirius (2006), is an installation composed of a blue sphere resting on a pile of salt by Lita Albuquerque, a white woman. Yet even here the politics of color are complex, as the artist is pushing back against Klein’s sexist deployment of “his” color via women’s bodies.

The exhibition title is polemical, punny, and destabilizing—not least because, conspicuously, few of these artists are also people of color. “Color” in this sense means “not white,” although “white” and “black” human skin share a melanin spectrum that ranges from pink to orange to deep brown. Hence, the satirical tenor of Brenna Youngblood’s gunky black monochrome Be Okay (BLK), 2017, which shares a joke with Kerry James Marshall’s coal-black figures. For “Blue Black,” the exhibition he organized recently at the Pulitzer Arts Foundation in St. Louis, artist Glenn Ligon examined the significance of the titular colors for African Americans. Similarly, Davis was interested in the inadequacy of language to account for the charged meanings that color can have. “Artists of Color” also took up the notion of color not just as a quality to perceive but as a lens that can literally and figurately transform our perceptions of an environment. Translucent works on view included a blue plexiglass box by Donald Judd, a candy-colored plastic awning by Diana Thater installed in the backyard, and a hot pink acrylic bubble by Michael Asher that cast a glow on the walls of the institution (which, it bears mentioning, were painted white).

One of the sharpest inclusions was Forbidden Colors (1988) by Felix Gonzalez-Torres—four acrylic panels that correspond to the white, green, red, and black fields of the Palestinian flag. The wall text in this case was a letter from Gonzalez-Torres, in which he explained that from 1967 to 1993, the display of these colors in any combination in Israeli-occupied Palestinian territories was punishable by violence and imprisonment. Displaying particular colors in Los Angeles, a city divided along racial lines, has sometimes carried its own risks. The show served to remind viewers that when colors take on an ideological cast, they can have dire consequences.