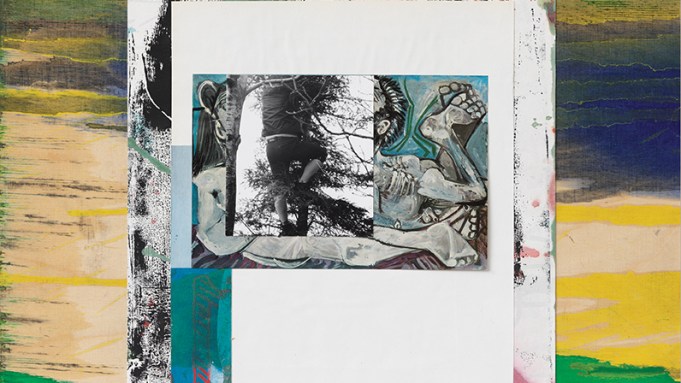 Venezuela-born, Berlin-based artist Arturo Herrera breathes life into well-worn practices of modernist collage, exploring the tensions between exactitude and spontaneity, placement and displacement. As chameleonic as he is consistent, he also plies such tensions in many other mediums, ranging from wall painting to screen prints to stainless steel relief and glass sculpture. This latest show featured a few recent series that employed different formats, scales, and materials yet shared some common tropes—most notably, the playful, partial occlusion of figurative imagery by nonobjective forms, and motifs concerning modern dance and the body’s movement in space.

Seven collage works, “I Heard Them and I Still Hear Them/Elements Nº 1–7” (2018), feature materials in arrangements of nested rectangles. Found black-and-white photographs of anonymous individuals engaged in various everyday activities float atop reproductions from a French catalogue of Picasso’s work and pieces of colored paper, the layered compositions pasted onto plywood supports painted in various modes of abstraction. The most salient feature of the pieces is their proliferation of right angles, a quality in many cases enhanced by the artist’s cropping of the Picasso plates. In one collage, Herrera has emphasized the empty space around the Picasso reproduction, using that blankness to set off a rectangular slice of abstraction at left. In the same work, the rippling reflection of an anonymous man wading into water in a photograph rhymes subtly with the black-and-white Picasso reproduction to which the image is affixed. The Spaniard’s legacy informs these works not simply through imagery but also through the anxiety of his influence, both as the preeminent avant-garde artist and the co-originator of modernist collage.

In fifteen collages titled “Set Design Studies for Dance/Elements Nº 1–15” (2019), Herrera has created more chaotically organized compositions, layering swatches of painted canvas, screen-printed imagery, photographs of dancers, and strips of felt on pink construction paper. Rather than presenting practical set designs, these studies evoke the potential (and lyrical) intersection of dancing bodies with sets, props, curtains, and other scenographic elements. Here, too, Herrera obscures and reveals in equal measure. A slice of felt descends over the photograph of a dancing figure, leaving only her feet exposed. If the photographs offer glimpses of some larger narrative, their partial concealment reveals the proverbial dance of form—the play of shapes torn from and shorn of context—to be the real subject of the works. Some of the pieces’ formal consonances—an arm rhyming with a wayward felt swatch, for instance—would have benefited from more breathing room. The works were hung in a tight grid that somewhat obscured the cadences within and among the compositions.

As optically striking as they are conceptually beguiling, nine works combining glass panels and wall drawings were displayed in the final gallery with enough room around them to accommodate the athleticism to which their title alludes: “Body and Feet Positions in Relation to Line of Dance Nº 1–9.” Based on the imagined trajectory of a dancer across a stage, a single abstract form was drawn at even intervals and the same height on three walls. Before each drawing hung an individual glass plate topped with black glass shapes in different configurations that partially filled in the outline on the wall, evoking the gestures and pauses that punctuate a dancer’s movement. The works’ diagrammatic nature calls to mind graphs or maps, while their conceptual and structuralist dimensions conjure installations by Barry Le Va, Sol LeWitt, and other artists concerned with the potential intellectual depth of flatness. The dance motifs, in other words, become abstracted and schematized, inevitably recalling Duchamp’s glass works. Yet Herrera’s slick panels also have a sensuous materiality: the black areas have a liquid, pooled quality—as if the results of pouring molten glass on the surfaces and allowing it to cool—appearing, by turns, pictorial and sculptural, flat and subtly bulbous. Dance, in short, anchors the artist’s latest series less as an end in itself than as a point of departure for formal and conceptual experimentation, the works shifting between bodily sensuality and cerebral pure form.

Home of the Week: This $50 Million, 59-Acre Nashville Estate Is the Most Expensive in Tennessee’s History