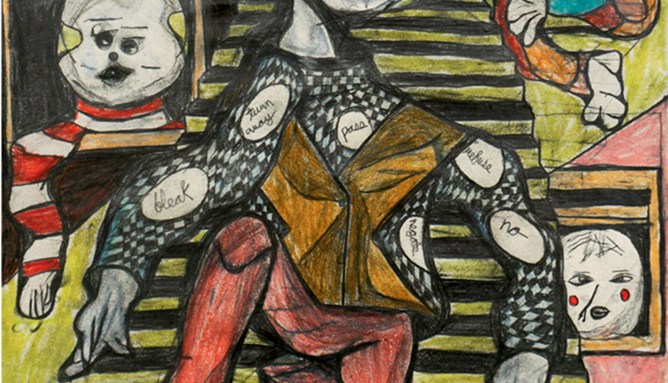 Like the newfound chumminess of former strangers emerging from a bar arm-in-arm and bleary-eyed, the odd pairing of works by Brooklyn comic artist Austin English and Oakland painter Sam Spano and in Et al.’s exhibition “In the Cups” felt necessarily contingent, unexpectedly revealing, and a touch superficial. Both English and Spano use figures as visual hooks in their images while testing the compositional restraints of their mediums. Had the artists, both of whom are in their thirties, been born earlier, their work might have been featured in a volume of Art Spiegelman and Françoise Mouly’s influential alternative comics anthology, Raw (1980–91).

Spano’s oil paint–and–wax crayon compositions on canvas (all 2018) were installed at the front of the gallery. Depicting lightly surreal tableaux of human sitters and animals in vivid or murky hues (pink, pea green, ocher, turquoise), the works have a loose, graphic style that recalls German Expressionism and certain strains of ’90s commercial illustration. The figures they portray are always playing it cool. The titular woman in Indigo Woman & Pink Bird, for instance, has a regal posture, while the companion perched on her forearm offers a suggestively comic shrug. Some works, like the orange-colored Bird on a Branch, depict scenes so banal as to feel like piss-takes. The drama, if that’s the word for it, is in Spano’s unexpected color sense. In Green Man Sunset, the time of day is conveyed by pink underpainting popping from beneath the swampy greens of the sitter’s shirt and by the flush of salmon on his chartreuse face.

The fifteen single-page original panels of English’s wild comic book Tanti Affetti (2017) provided a marked stylistic contrast to Spano’s work. Recalling the grotesque oil paintings of Claus Castenskiold, the series depicts a rag doll–like character’s hellish journey through a menacing urban realm that fractures apace with the figure’s own dissolution, page by page. English’s use of colored pencils is distinctly smudgy and grimy, while his attacks on perspective, sometimes aided by collaged insertions of additional material drawn by the artist, untether us from the picture plane. The aforementioned protagonist, whom I’ll refer to simply as the man, is first shown descending a staircase as various ghoulish figures look down from windows. The man, by way of a speech bubble emitted from his rictus, hints at the existential terror to come: looking forward to a day of half-heartedly negating myself. As his self-critical monologue continues across the panels, the changing text on the patches that cover his checkerboard-patterned shirt (pointless emotion, insolvent, calamity, charlatan) becomes a kind of news ticker providing real-time updates on a rapidly unspooling consciousness. The onlookers in the first panel give way to billboards of brand names, which, in turn, become merely blocks of color by the time the man—now almost a puddle—delivers his last gasp: I FEEL . . . SHAME AT HAVING A DECENT MIND AND NOT USING IT AS A SHEILD AGAINST THE AGGRESSION OF THE WORLD.

There is little middle ground between Spano’s dreamlike scenes and English’s nightmarish narrative. For Spano, the fantastic seems to provide a new way of apprehending the known world; whereas with English, it holds up a scratched and dingy mirror to it. “In the Cups” provided a brief entrée into two ways of seeing that are both intoxicating.