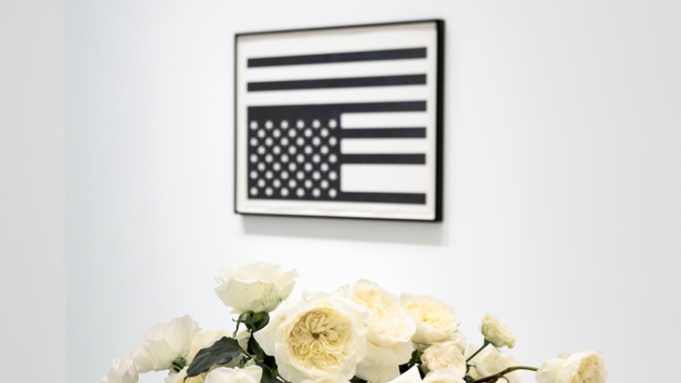 In the early 2000s, Banks Violette was everywhere: in sold-out gallery shows, in the Whitney Biennial, in the pages of the New York Times Style section. Merging the aesthetics of Post-Minimalism and heavy metal, his cerebral brand of goth formalism was slick, seductive, and nihilistic, characterized by glossy black surfaces and invocations of subcultural excess. His 2002 exhibition at Team Gallery, “Arroyo Grande 7.22.95,” for instance, was inspired by the gruesome ritual murder of a teen girl in California by classmates obsessed with the band Slayer; the show’s centerpiece was a set of drum stands bearing twelve black resin stalactites representing the victim’s stab wounds. Violette came with an appealingly authentic pedigree: a high school dropout from Upstate New York, he had been a meth addict and tattoo artist before entering the MFA program at Columbia. Who better to serve as the art world’s avatar for Bush-era anomie? But his success proved to be fleeting: within a few years, his work had all but disappeared from view.

When I saw Violette’s 2005 solo show at the Whitney, which revolved around the ghostly replica of a burned-down church, alluding to a series of church fires started by black-metal devotees in Norway, I thought it was the most profound thing I’d ever seen. Then again, I was seventeen. In retrospect, I find my early fascination with Violette’s work a little bit embarrassing, in the same way that I’m now embarrassed by the tattoo I picked off the wall of a shop that ignored my obviously fake ID or the punk band patches I safety-pinned to my backpack. Violette’s subject matter may have been genuinely depraved, but the works were always sanitized and gallery-appropriate; they didn’t so much articulate discontent as ostentatiously telegraph it through signifiers of rebellion.

It’s been nearly a decade since Violette’s last exhibition in New York, but not much has changed. At Gladstone 64, six monochromatic drawings (all works 2018) lined the walls, each a precise graphite rendering of an appropriated image: logos for the plumbing company American Standard, the television show “Roseanne,” and the late ’70s and early ’80s “nihilist newspaper” International Anthem; a washed-out headshot of Stormy Daniels; an upside-down American flag. A spare abstract drawing of overlapping white squares on a black ground was the outlier: it was based on an image left on Violette’s computer by a studio assistant who committed suicide. Standing on a pedestal at the center of the second room was the exhibition’s sole sculpture, No Title (N.O./powercorruptionandlies): a cast-aluminum basket bearing a vaguely funereal arrangement of (real) white roses. The sculpture is meant to refer to the cover of New Order’s 1983 album Power, Corruption & Lies, an image that in turn reproduces a nineteenth-century painting by Henri Fantin-Latour. The main difference is that Violette’s flowers are all white, a heavy-handed comment on the work’s status as a copy of a copy; per the press release, it functions as a “post-mortem artifact, a signifier so bloated with oscillating connotations that it wilts under the weight of its own history.” Really it just looks like a basket of flowers.

Individually, the works are not particularly interesting, though the deadpan quality of their transcription suggests this was by design. They operated paratactically, forming a sort of tone poem about, I guess, the topsy-turvy landscape of Trump’s America, in which the cancellation of a beloved sitcom is front-page political news and a porn star might save us all from doom. But what, exactly, was the point? I left with the sense that Violette’s real interest was in giving Gladstone’s ludicrously elegant Upper East Side town house a punk makeover, tarnishing its white marble floors, pristine white walls, and ornate white mantelpiece with his symbols of social discord. Is there a more adolescent kind of subversion?