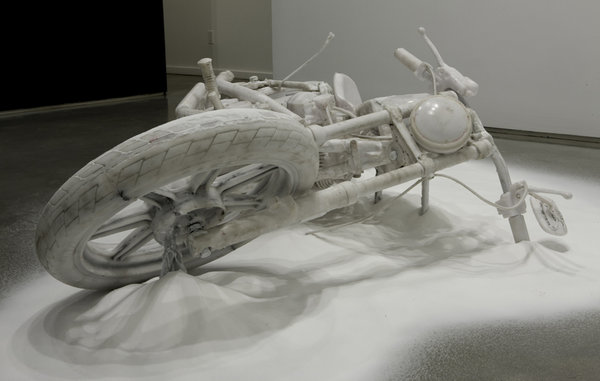 The ten graphite drawings and one salt sculpture that compose Banks Violette’s latest exhibition at Team Gallery, “Not Yet Titled,” are haunting creations; they’re attempts to breathe life into subjects whose lives have been lost. The death of the painter Steve Parrino acts as the backdrop to the exhibition: In the gallery, the first thing that greets the audience is a black vinyl square on the floor, which evokes the oil slick on which Parrino’s motorcycle slipped in a fatal crash. The black square is also a dimensional portal — and a nod to Kazimir Malevich’s masterpiece Black Square from 1915 — on which an outward projecting arm of road case benches is placed that links the installation of drawings like satellites orbiting a planet.  Each individual drawing possesses its own power and engages its viewer with different, often oblique viewpoints; some objects are out of focus, others are just out of reach. An inverted American flag is propped against the wall like a monolithic tombstone, a rigid, empty symbol of an empire in decline.

In a recent conversation, Violette said of his work, “It seems impossible that something visual could be picked over so cleanly that it doesn’t seem like it could sustain more meaning. A flag is so over-determined, but when it gets re-animated usually it’s a circle of violence like a corpse coming back to life in a zombie movie. When the dead come back to life usually it’s not a positive result.”  Inside this reasoning-a somewhat cryptic overview of his artistic philosophy-lies the engine that generates much of Violette’s art. The titles of his recent drawings are conceived of as if they were assigned by computer, a reminder of the digital files that will propagate their re-animation. Each is named as Not Yet Titled with a number that designates the order in which they were completed with no apparent hierarchy.

The first drawing in the show Not Yet Titled (dwg09_04) depicts a Christ figure crowned with thorns who seems to have already uttered his final iconic words, asking his maker why he was forsaken and left to die in such agony. Bela Lugosi, a Hungarian born actor who struggled with drug addiction and was best known for his role as Count Dracula, is the person whom Violette has previously cast to play the part of Christ in his drawings. In 1932 Lugosi stared in White Zombie, which many consider to be the first zombie film ever made. Violette highlights the investment of one’s faith in an image of Christ, amplifying it to reveal the nature of art: Without the fundamental act of belief — in a work of art, or an image of Christ for example — art is utterly meaningless. For Violette, Christ is a zombie, endlessly reborn in the hearts of the faithful.

As with much of Violette’s work, allusions to metal music, zombie films, and post-minimalist art act as reference points.  The film The Crimson Ghost (1946) provided the source imagery from which the punk band The Misfits took their iconic hood-draped skull. Violette’s version is a sly ghost, a bandleader of a danse macabre. George Romero’s Night of the Living Dead (1968), widely regarded as the most significant zombie film of all time, was released days after the conclusion of the Tet Offensive, a watershed moment in the Vietnam war that saw 75,000 casualties. Violette’s drawing, Not Yet Titled (dwg09_03), depicts a bound prisoner, who awaits his certain fate. Unmistakably evocative of the conflict in Vietnam, it is an iconic reference to the soul-crushing cruelties of war. Among the most overtly political of images ever made by Violette, the captive is an image of oppression, a pitiless sacrifice, a symbol of irrational violence, and a soulless casualty (or a zombie of war) whose power to haunt re-plays itself with each glance.

Elsewhere in Violette’s drawings, clusters of star shaped balloons waft aimlessly, a menacing lamp swoops like a bird of prey, and an ace of spades is simultaneously a representation of the highest value card in a deck and a symbol of death. In one drawing, wherein a mirrored ball has been cut from its supporting chain, vigorous passages of heavy graphite are punctured by the light reflecting from its faceted surface. These drawings seem to reflect on the late 1960s and 1970s, a time when the party was over just as it was getting started. Like many artists working against the backdrop of American post-minimalism, engaging  the surrounding space is key for Violette. One unfortunate decision made in the display was to frame these drawings with ordinary paper mats, which restrain rather than release their potent imagery. Violette’s decision to hang the drawings low to the gallery floor propels the viewer through the gallery; the spatial continuum breaks loose in the back room where one is made a witness to an accident: a crashed, ghostly motorcycle.

The motorcycle, ZODIAC (F.T.U.) / 74 ironhead SXL, is a direct reference to the untimely death of the painter Steve Parrino in 2005. Riding home on his motorcycle early New Year’s Day, Parrino’s Harley Davidson hit an oil slick and in the resulting crash Parrino died. It was a tragic demise, scripted as if somehow the painter, an idol of the younger Violette, died by slipping on the slick enamelled surface of one of his own paintings.  Framed opposite the salt bike on a black wall is a drawing of a memorial ribbon, which is palpably evocative of the monochromatic paintings that Parrino made on slackened canvases. Team Gallery, which also championed Parrino’s work, becomes a backdrop itself. The ensemble of sculpture and drawing acts as a memorial and tribute to an artist who had an immense influence on Violette.

Disturbed as one may be by their content, Violette rejects the notion that his art is insistently negative. Rather, he looks to violence and other gratuitous acts of loss and destruction as positive forces in the shaping of American history (or for that matter, the creation of art). His belief in the ability of an artist to resurrect an image or object-to bring it back to life-is unrepentantly powerful. As a body of work, Violette’s drawings illustrate Nietzsche’s belief in the futility of vision, which he once articulated as “the erroneousness of the world in which we believe we live is the surest and firmest thing we can get our eyes on.” Violette’s drawings are filmic drains, black holes of disbelief, where fear and bewilderment are met with a sublime vision of artistic creation.

It’s Frigid Outside, Reusable Hand Warmers Keep Your Hands Toasty Without the Bulk