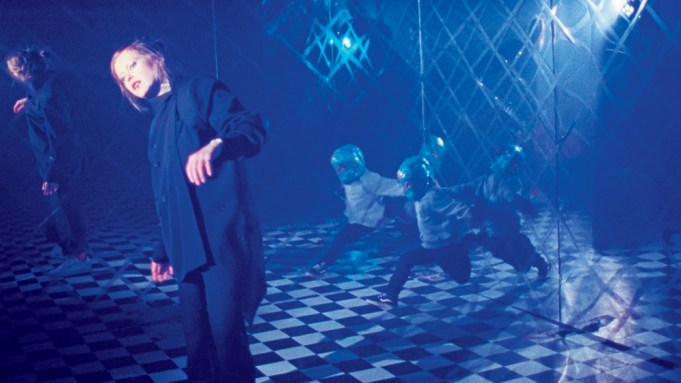 French-British filmmaker Beatrice Gibson champions community, creativity, and motherhood as ways of living through times of political turmoil. “Crone Music,” her solo exhibition at Camden Arts Centre, features two experimental films: Deux Soeurs Qui Ne Sont Pas Soeurs (Two Sisters Who Aren’t Sisters, 2019), based on a short screenplay by Gertrude Stein, and I Hope I’m Loud When I’m Dead (2018), which takes its title from a poem by CAConrad. Like much experimental cinema, these films disorient. The soundtracks layer contemporary poetry and music over fast-moving visuals. The imagery is sometimes blurred and abstracted, with some shots bearing no apparent relation to the voice-overs. Time is elastic; there is no sense of a sequential progression of events. Several viewings of the works are required to gain a sense of their internal coherence and the connection between them.

In a talk before the show’s opening, Gibson said that she has shifted her focus away from male avant-garde composers (Robert Ashley, Gordon Mumma, and Cornelius Cardew all figured in her earlier works) and toward emphasizing feminist and queer perspectives. After she became a mother, she explained, she was confronted with the inequities faced by women artists. “Crone Music,” titled after an album by US composer Pauline Oliveros, seeks to redress the balance. Gibson has dedicated a room to experimental films by women and organized a generous program of workshops and performances involving her collaborators.

Deux Soeurs is a hymn to sisterhood in the broadest sense, with appearances by peers of Gibson including poet Alice Notley, filmmaker Ana Vaz, and gender-fluid performer Adam Christensen. The action, underpinned by a surreal search for a missing white poodle, meanders dreamily between a nightclub, a laundromat, and Parisian streets. Christensen captivates with his emotional singing. Vaz drags sensuously on her cigarette as she reflects on Brazil’s ominous return to right-wing populism. Pregnant educator Diocouda Diaoune tells her unborn child, “I know that my story won’t repeat itself, and that reassures me.”

I Hope I’m Loud When I’m Dead, shot in Europe and the US around the time of Donald Trump’s inauguration, assumes a darker, more urgent tone. In a voice-over, Gibson describes the claustrophobia of being trapped in a train tunnel and feeling “all nerve, edgeless, pulsating,” as images flash by of commuters, violent protests, riot police, trains on fire, collapsing icebergs. Gibson anchors this sense of world tumult in poetry, with footage of impassioned readings by Conrad and Eileen Myles, plus her own citations of Notley, Audre Lorde, and Adrienne Rich. Conrad, whose boyfriend was murdered in 1998, recites searing lines such as “Your rapists were the last to taste you in this world,” compounding the anxious atmosphere. But what gives the film its raw power is Gibson’s insertion of intimate autobiographical details, as in her spoken love letter to her daughter and scenes of her partner bathing their children by candlelight. The finale is an intoxicating homage to Claire Denis’s film Beau Travail (1999), which culminates with the protagonist abandoning himself on the dance floor to the ’90s hit “The Rhythm of the Night.” Gibson and her son Obie, who sports a green monster mask, reenact the scene with wild exuberance in a poignant celebration of maternal love.

Motherhood, long an unfashionable concept in the art world, gets a welcome makeover in these films, conveying an ideal of feminine nurturing, not just of offspring but of a collective future. In I Hope I’m Loud When I’m Dead, Gibson’s initial panic is transformed by the end through her experience of maternity; her “edgeless” sensation has become a positive feeling of oneness with her family and friends. She proposes creativity and kinship as a mode of being, indeed survival, telling her daughter: “Grief, war, destruction, fear. It’s almost all OK because these voices exist. The person who teaches me the most, though, is you.”