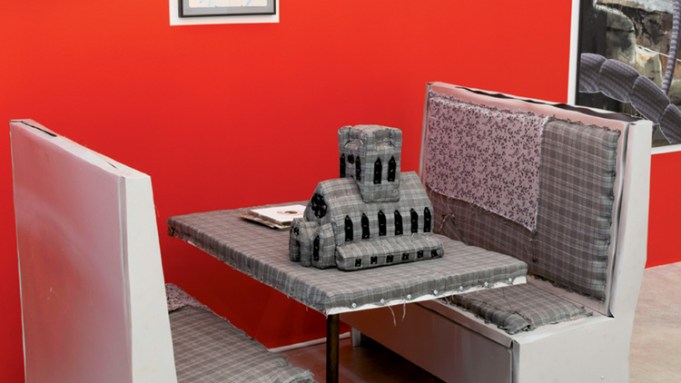 I am eating dim sum at China Chalet on a weekday afternoon. Sunlight beams through the second-floor windows, from which I watch the Financial District lunch crowd circulating through the Pret A Manger across the street. China Chalet transforms into a club-for-rent come evening. I’ve only been here before for the monthly Glam parties—predictably debaucherous, arguably glamorous who’s-who affairs for the downtown scene—and am surprised to see no exes or past hookups perched across the room, no cigarettes being smoked (that the venue allows smoking is one of its main attractions, resplendent mirrors aside), mostly suits having lunch. It’s odd to find yourself somewhere you’ve been many times before, but to find it markedly changed.

This feeling is not unlike the one I experienced when visiting New York–based artist Ben Schumacher’s exhibition “The China Chalet Group,” for which he constructed a three-quarter-scale replica of the restaurant—booths, DJ stand, dance floor, and bar—from memory. Composed primarily of anodized aluminum, the facsimile appeared cold; the furnishings were shell-like, the smell that clings to your clothes the next day absent. Presumably aware of this lack, Schumacher inserted allusions to the nights played out in this hallowed space in the form of wall-mounted drawings scribbled across tiled coasters—one image depicting a bartender shaking a martini, another portraying a pile of loosely rolled joints—as well as crudely made dioramas of the venue placed atop the tables, which had been collaged with fragments of the script for a forthcoming film that is set, it seems, at China Chalet. Stills from the film hung on the gallery walls.

The restaurant portrayed in the show’s various components was not quite right: large segments were missing or misconstrued; the logo typeface was inexplicably pulled from The Godfather; there were confusions with other venues, such as the East Village’s KGB Bar; and throughout there was an aesthetic hunger for all things Berlin. Were the discrepancies the result of some sort of trauma, lapses in memory caused by drug-addled chunks of the night spent spiraling? Or is it simply that the mythology of China Chalet is about as insubstantial as the inebriated conversations carried out inside the place?

The script was written collaboratively à la Reena Spaulings by Franco Polish Black Jeans Porn Club (FPBJPC), a collective of which Schumacher is a part. Throughout are allusions to loneliness, impotence, and isolation, and the suggestion that nightlife holds out the promise of remedying such conditions. A character named Rocker One connects his dissatisfaction with life and his career ambitions to seeing a beautiful girl, whose disinterest prompted him to try, he says, “to make something so fucking good that I’m worthy of that thing that I lust after. If I got everything I wanted from girls I wouldn’t write shit.” Much of club culture’s appeal is contained in the anticipatory, fueled by the fantasy of where the night might lead.

For “The China Chalet Group,” Schumacher took on more directly than ever before the role of the Selbstdarsteller, or self-performer, to borrow a term Diedrich Diederichsen used to describe Martin Kippenberger. The installation incorporated a web of references to past projects—such as a tabletop replica of a Montreal church where Schumacher curated a group show that included many of his friends, or cut-up programs from past performances listing members of FPBJPC—that seemed meant to imbue his artistic practice with a kind of social cachet. As with Kippenberger, there is a careful calculus of self-effacement and self-aggrandizement, and I cannot help but imagine the forthcoming film as set in a boys-club’s backroom where the furniture is too small for the actors, who play characters they have outgrown. Luckily, as with Kippenberger again, the work isn’t just cigarette smoke and mirrors; the parts that make up the whole are quite striking in themselves.