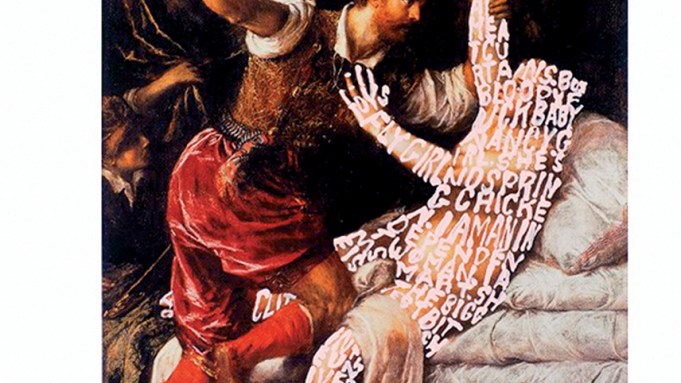 Pink text snaked in tight, meandering rows across human figures in the fifty-one recent paintings on paper in Betty Tompkins’s second solo exhibition at P.P.O.W. One piece read, I WAS HUNTING FOR A JOB AND HE WAS HUNTING FOR ME. Another: SHUT UP SLUT! And another: I VEHEMENTLY DENY THESE ALLEGATIONS. The paintings were from two series: “Women Words” and “Apologia.” The former incorporated mostly crude phrases about women or short anecdotal statements from them. The majority of this text was culled from response cards filled out by visitors to two previous Tompkins shows, which themselves featured paintings depicting responses to an email blast soliciting words or phrases the recipients associated with women. “Apologia,” meanwhile, appropriated the labored quasi-apologies or denials put forth by figures recently accused of sexual harassment, including Les Moonves, R. Kelly, Chuck Close, and curator Gavin Delahunty. In both series, the artist used artwork reproductions torn from art history textbooks as her supports, yoking contemporary sexist slurs and the recent comeuppance of celebrity serial assaulters to the long history of male power in the arts.

Hung at eye level and almost edge to edge, the works encouraged close looking. For each, Tompkins applied the pink text to one figure or sometimes two in the reproduced artwork, simultaneously highlighting and obscuring the forms. In “Women Words,” the art historical works are by men and the figures Tompkins has painted over are female, while in “Apologia” the source works are frequently by female artists, like Suzanne Valadon, Gertrude Käsebier, or Artemisia Gentileschi, and the figures generally male. In the “Women Words” pieces, simply by veiling the female figures with text, Tompkins reveals how consistently, over the course of art history, artists have structured their pictures around women as objects of a man’s gaze. The instances in which the overpainted figures are posed in such a way that they register instantly as women are especially compelling, as, for example, with Venus’s anxious turn to restrain Adonis in Women Words (Titian #5), 2018, or with the brazen sprawl of a nude model in Women Words (Helmut Newton #6), 2018.

For seven recent works shown in a back gallery, Tompkins affixed vinyl letters spelling out statements from the aforementioned response cards or from stories of sexual misconduct and gender discrimination that she had gathered elsewhere to canvases painted pink or black. She then airbrushed grayscale images of vulvas on top and peeled off the letters, so that the underpainting is visible in the form of the statements. Displayed in another room was a selection of paintings dated between 1978 and 1984 in which fragments of text from the United States Constitution or Bill of Rights are rendered on grids made from the word “law.” These works demonstrated that Tompkins has been pursuing for decades the kind of politically engaged, text-based conceptualism that undergirds the recent paintings. She worked in relative obscurity, however, until 2002, when her “Fuck Paintings” (1969–74)—a series of photorealistic depictions of sexual penetration—were exhibited at Mitchell Algus Gallery in New York.

That the two main series in the P.P.O.W show employed images of historical artworks as a substrate inevitably led one to picture the series being used in a pedagogical setting. Indeed, Tompkins’s work, with its formal elegance and conceptual clarity, would be apt in the art history classroom. It would point up the power dynamics of canonical art and help redefine its narratives, from which women’s perspectives have been so perniciously excluded.