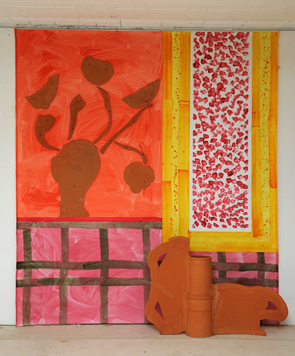 “Front/Back,” Betty Woodman’s first show at Salon 94 in New York, features her signature ceramic forms-vividly painted cylinders with irregularly cut, flat slabs attached as eccentric “handles” or as a concealing frontal plane—and displays the dazzling variations she has introduced since a 2006 retrospective at the Metropolitan. The new show includes fewer than a dozen works, although only a few  are stand-alone. Most are diptychs and triptychs, comprising two or three vessels, and Sunset (2010) is a roughly 8-by-7-foot painted canvas set behind a vessel on the floor.

Given this cast of characters, the room is alive with color and motion, an effect heightened by the figurative imagery Woodman has recently added. Posing nudes are painted on  the works’ frontal slabs; the imagery amusingly compares with the subtle anthropomorphic suggestions of pottery forms. Gail Posing (2011) comprises two vessels whose front panels are connected by Woodman’s painted rendering of two nudes, standing and reclining. A coherent architectural space is depicted but irregularly cropped by the shape of the slabs and the gap between them. The pictorial side contrasts sharply with the other, where the cylinders are exposed. This latter is nearly all white, with no picture to attend to, so one studies instead the throwing lines in the cylinders and the joints of plane and vessel.

Equally exciting are the complex patterns of the three singular vessels in the show, from Woodman’s “Aztec Vase” series. These consist of an elongated cylinder with four irregular handles attached, at relatively even intervals, so the vessel divides into quadrants. There is no front: each of the four “faces” of the vessel presents a scene of Matissean decorative exuberance fragmented in a manner probably more familiar in photography than in ceramics.

The attachments, which are not much like handles in this case, have such unpredictable and unlike perimeters that the overall shape can’t be grasped. Each carries multiple clashing colors and patterns—dots, stripes, arabesques, you name it—until the whole becomes visually explosive. Aztec Vase 10 (2011) includes some shapes and broad, curved lines in pure white that seem to slice up the tangible form because they blend with the gallery walls, leaving chunks of color hovering in space.

One does not associate Woodman with straight lines, so yet another surprise in the show is a solo vessel with rectilinear marks on one side. It could be called De Stijl, but the artist named it Winged Vase: Eros (2009) in reference to the propulsive appendages of ancient Greek statuary. This rich and satisfying assortment is only a fraction of Woodman’s recent activity.

Woodman’s solo exhibition is on view at the Gardiner Museum in Toronto through June 5. Her family is the subject of a documentary film, The Woodmans, recently shown at Film Forum in New York.