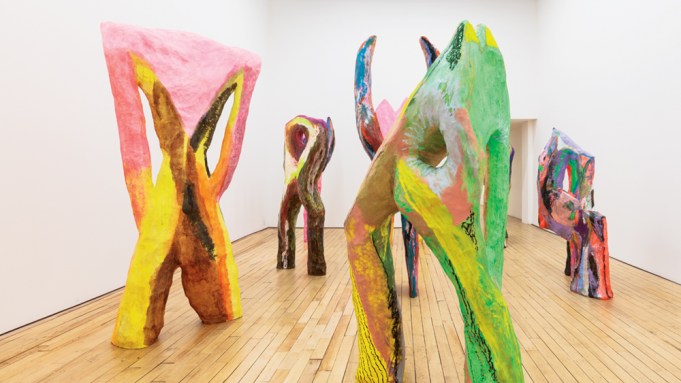 It takes a moment to realize that Bianca Beck’s sculptures are posing. The works, composed of papier-mâché molded by hand over wire mesh, are rough-hewn yet biomorphic forms nearly as tall as the viewer, or taller. As one walks among them, a posse of club-goers emerges, strutting and voguing. In fact, a stated influence on Beck is club goddess Grace Jones, who hovered over the proceedings in spirit, if not aesthetic. Jones’s visual identity was largely defined by her collaborations with the graphic designer and photographer Jean-Paul Goude, in whose images she appears as some androgynous being from another planet, all Suprematist color blocks and geometric poses, vamping for the viewer with a cigarette clinging to her lips or her body contorted in impossible ways. While Goude portrayed Jones in a crisp, Pop-inspired manner, Beck’s nightlife denizens are Ab-Ex washy, bearing fluorescent doodles and brushstrokes and frenetic striations of color, like de Koonings rendered 3D with swagger and attitude. One splashed in fluorescent green appears to be bending over at the waist, with one “hand” planted on a leg, the other on its waist; another, covered in a wild, multicolored pattern, squats with legs and arms akimbo; and yet another greets visitors with its arms raised high, a bright pink triangle at its apex forming a torso of sorts.

To reach this dance floor, one walked through a hallway of paintings featuring a similar palette and style as the sculptures. In the painted compositions, loosely defined figures collapse into tangles of limbs, and thick scribbles of color emanate here and there. Bodies break apart, multiply, and join together. This idea of coupling is important to Beck. The exhibition was titled “Body Double,” and the press materials note that the work was inspired by the speech Plato has Aristophanes give in the Symposium. In that account of the origins of love and sexuality, the Aristophanes character says that in primeval times humans were essentially double their current form, with Janus-style heads; four hands and four feet; and two sets of genitalia—both male, both female, or one of each, the combination determining which of three sexes they belonged to. Threatened by the power of these early humans, the myth goes, Zeus cut them down the middle, leaving the split beings to search for their other halves, with some males lusting for males, some females for females, and the combined-sex variants seeking heterosexual relations.

This embrace of queerness—of desire defined by variety, openness, and the need for others—is reflected in Beck’s motley assortment of sculptural figures, which appear to find joy in simply being together as a group. “Body Double” was also inspired by political protests, and clubs and protests have of course never been mutually exclusive. Bars were pivotal spaces for the gay liberation movement, and still today are strongly associated with shelter and the potential for galvanizing alternative communities, despite the vulnerabilities that recent attacks have exposed. Thus, the takeaway of “Body Double” is perhaps that parties aren’t always just parties, and that in the movements of dancing bodies we might find the momentum for collective movements.