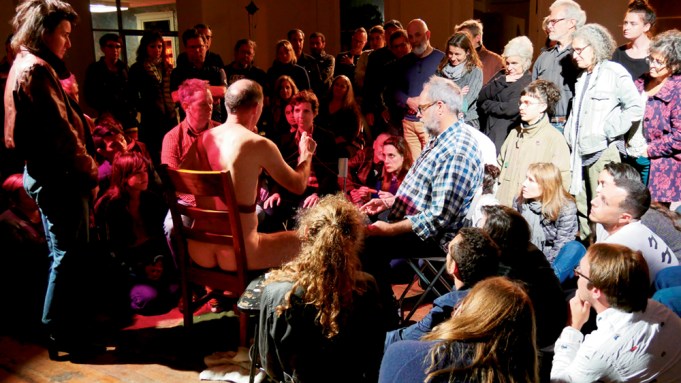 DUSHKO PETROVICH and ROGER WHITE, eds.
As Radical, as Mother, as Salad, as Shelter: What Should Art Institutions Do Now?
New York, Paper Monument, 2018; 112 pages, $15 softcover.

“Now more than ever”: these words have appeared in fundraising appeals for every self-proclaimed progressive art institution since the presidential election of 2016. The phrase assumes an important role for art in facing the crises of our time, and indeed art institutions are more interwoven with the news cycle than they have been at any other point in a generation, responding to travel bans by hanging paintings from banned countries and offering a golden toilet to the White House in protest, while also getting unfavorable attention from highly visible boycotts and reminders that members of the Trump administration sit among their trustees. The question of what the art institutions making this appeal actually do in response to social and political urgency has too often remained vague and unexamined. As Radical, as Mother, as Salad, as Shelter: What Should Art Institutions Do Now?, a slender new book from the Brooklyn-based alternative publisher Paper Monument, weighs in with an attempt to survey this ungovernable moment and its demands on art institutions.

The volume comprises thirty wide-ranging responses to a survey of seven questions, including: “Can the institution go from being an object of critique to a site of organizing?” and “How can art institutions be better?” Though the manifesto-like title suggests a radical impulse, the book as a whole offers contradictory views.

In their brief preface, editors Dushko Petrovich and Roger White align themselves with the radicals, stating that they want the book to function “as a curatorial resource, as an educational text, and as a tool for organizing.” Though the variety of the responses seems to undercut the goal of providing any coherent framework for mobilization, As Radical plays another important role: making our often restricted definitions of the art institution more malleable. Taken as a whole, this compendium refuses the assumptions of large size and structural impermeability often associated with the word “institution” and instead embraces more open-ended ways of working. The book’s title is borrowed from the entry by artist-curator Kristan Kennedy, one of the artistic directors of the Portland Institute for Contemporary Art; in addition to radical, mother, salad, and shelter, she suggests thinking of the institution as public policy, as decolonizer, and even as book. Conversely, we can see this book as an institution—one that holds multiple positions, makes space for dissent, and attempts to model ways forward.

Deborah Fisher, executive director of A Blade of Grass, a nonprofit that provides support for social practice artists, sets a baseline tenet: “Art institutions are inherently political forms.” How institutions are constructed, how they are funded, whom they hire, whom they serve, what their vision of art in public life is—all these things go into the politics of the institution, and all of them are up for reconsideration. Institutions are spaces to organize in, against, with, or beyond. For Fisher, this power comes from their prerogative to “make culture” and their “responsibility to consciously create the next moment.” This is echoed by curator Risa Puleo, who says that institutions offer a “rehearsal space, a place to practice what we want to do in the world.” In our unending “now,” this labor of creating the next moment is the urgent work of our time.

Ken Chen, executive director of the Asian American Writers’ Workshop in New York, articulates both a future and a deeper history for institutional practice in his tour de force essay, “Ethnicity As Counterculture.” Productively deviating from the pre-formatted Q&A of most other responses, Chen argues for the institutions of art to be seen as prefigurative spaces, their structures as a precondition of political organization. Chen considers past groups ranging from the Black Emergency Cultural Coalition and Guerrilla Art Action Group to the Combahee River Collective, as well as the broad Socialist-linked cultural front in the 1930s and ’40s, Chen argues that culturally specific gathering often leads to a political practice, and this political work in turn inspires new institutions that reflect more radical values. This turn not only clarifies the role of the art institution, but also expands the understanding of who may make these institutions, and how they may be shaped. Chen proposes a new wave of institutional analysis that “begins as critique and ends up in institution building.” This bottom-up activity is the truest distillation of what we see happening in our broader cultural sphere as the movements for black lives, decolonization, anti-gentrification, and other causes increasingly inspire the formation of new organizations, collaborations, and collectives. These are becoming the essential new institutions of our time, whether or not we see them as such just yet.

The book’s alphabetical arrangement sets the response from art historian Lori Cole right after Chen’s essay, and she underscores his thesis, stating matter-of-factly that perhaps the institution could be defined as “all sites of cultural organizing.” Cole proposes that “art can model new ways of being in the world . . . not in any prescriptive or propagandistic mode, but in the broadest sense possible,” and makes a more practical appeal that those within institutions can offer marginalized communities and cultural organizers “the resources, the prestige, or even just space of institutions . . . to launch larger social movements beyond their boundaries.” The work of the institution, she argues, should be anticipatory. We organize against institutions and hold them accountable so that they may “prompt social change, rather than simply respond to it.”

The most disappointing refrain found throughout is that “institutions are comprised of many, many people, following many different rules, so it’s very difficult to say an art institution should do this, or should do that” (Pablo Helguera, director of adult and academic programs at the Museum of Modern Art in New York) or that “organizing takes people, not institutions” (Regine Basha, residency director at Pioneer Works, Brooklyn). The logic behind these statements is that art institutions cannot be coherently political because they are complex and collective, as if any political movement does not share these exact same qualities. This view leaves the institution always as a site of critique, never of leadership, at best a mirror of culture, never its future. The question is not whether institutions should be political (because, as Fisher and many other contributors make clear, they have always been), but what kind of politics they should deploy.

To say that art institutions can, in fact, have political agency is not to say that they are pushing culture forward. Many of our institutions as they currently exist are not up to the task of envisioning equitable futures. As we have seen again and again, they are sites that need to be organized against, whether in the many tendrils of Occupy Museums (a movement that initiated the current era of protest against art institutions by pushing for fair labor practices and equitable pay), in the numerous race-related boycotts and protests over the past two years, or in the recent union actions at New York’s Museum of Modern Art, the San Francisco Museum of Modern Art, the Guggenheim Museum, and other places.

This clarifies a schism in the book as in the world: art institutions may be prefigurative sites pointing toward new worlds and exact replicas of the inequities, failures, and abuses we find elsewhere in our dismal moment. Laura Raicovich, both a respondent and a frequent reference in the book in regard to her controversial dismissal from the post of director of the Queens Museum last year, states that institutions need to “operationaliz[e] institutional values. Say what’s important and then act accordingly.” One could argue that art institutions have been operationalizing their values forever, but those values do not match the demands their publics are making of them. To paraphrase criminal justice activists, the problem is not that the system is broken, but that it is working exactly as it was designed.

Though this book feels of the present moment, many contributors, including Chen, Cole, and curators Namita Gupta Wiggers and Alex Klein, remind the reader that for those to whom the crises of exclusion, of colonization, of failure of representation are not new, this is a breaking point centuries in the making. As Dena Beard, director of the Lab in San Francisco, notes in her impassioned response to the questionnaire, art institutions are products of our collective labor, resources, and attention, and “it is up to us to convert our private suffering into a collective anger . . . to start demanding again and again that our decadent institutions stop exploiting us and start working for us.” We demand, she says, that our institutions become better—now—or we must create them anew.

Writer and curator Anuradha Vikram’s entry is a tonic end to the book. She states that the current reshuffling of priorities means that the politics of institutions are “becoming clarified”: that large museums with intractable boards and low tolerance for risk necessarily offer different possibilities for political action than nimble, independent spaces with more responsive missions do. Expectations of both large museums and artist-run spaces should be stretched, and small scale is no indicator of equity. But in reading the book through, one finds some strategies: make space and allocate resources for community organizing and activism, as the Portland Institute for Contemporary Art does; orient toward the material realities and demographic makeup of one’s neighborhood, as the Queens Museum has; write equity into employment contracts as Beard has at the Lab; and pose questions to all an institution’s stakeholders to ensure transparency, as A Blade of Grass has done.

Here at the beginning of 2019, two years into the Trump regime, we need at least to be clear about what we want our institutions to do. For Vikram, this means each institution should “start getting in touch with what its politics actually are.” We, as constituents, can choose to perpetuate those politics as they exist or to replace them, but the appearance of progressivism in organizations that are funded by extractive, exclusionary economic systems is no longer sufficient. We deserve better than just more spaces to organize against. To be for something is always more potent than to be against something, and art and its institutions offer a means to rehearse a future we can live in. We need that now more than ever.