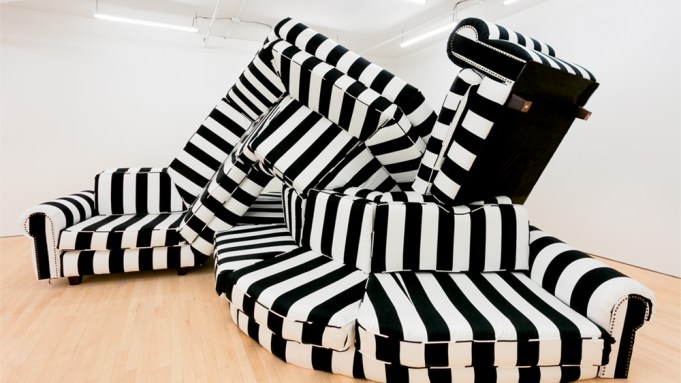 Borna Sammak’s Not Yet Titled (Couch), 2018, suggests a sculptural reimagining of Duchamp’s painting Nude Descending a Staircase, No. 2 (1912). The gigantic, snaking black-and-white-striped sofa appears to chart movement through space, evoking the sort of twists and turns that carrying a large piece of furniture up a stairwell and through a doorway requires. The domestic colossus—which looks straight out of Beetlejuice—was the centerpiece of Sammak’s JTT exhibition, “Hey, You’re Part Of It.” The work set the scene for his alternate universe, where everything is oversize, chromatically saturated, and slightly off-kilter.

Watching over the sofa was a framed cartoonlike printed image depicting Jesús Malverde, a Robin Hood–type bandit from Mexican folklore who has been adopted as a kind of patron saint by drug dealers and traffickers. Sammak has surrounded the image with a garland of chunky epoxy resin flowers, creating a ridiculously mawkish piece of kitsch.

Leaning against another wall was a six-foot-tall portrayal of a copy of Richard Scarry’s children’s book What Do People Do All Day?, made of enamel-painted canvas on wood. In Sammak’s version, the book’s title is emblazoned in black across a field of school-bus yellow, the cover’s imagery of animals going about everyday human duties appearing only in slightly raised outline, obliterated by the brightly colored enamel. The title’s larger-than-life scale gives the childlike question a sense of pathos, and I found myself viewing the work in relation to the couch, which Sammak told me he based on the Ralph Lauren one he bought recently for his first “adult” apartment. Indeed, there is something innocent about his works, which suggest glimpses of the world seen through wide eyes.

Across the way was a giant plastic-wrapped package of flip-flops—a throwaway item apotheosized to become beach apparel fit for the gods. Like the aforementioned sculptures, this one is based on an actual found item. The artist purchased the original flip-flops at a deli in Los Angeles, as the press release informs us, and has since kept them pinned to his studio wall. His sculptural amplification of them urges the viewer to consider the potency that all objects can hold, coaxing another Duchamp parallel.

Sammak is part of an up-and-coming milieu in New York that includes Jamian Juliano-Villani, Alex Da Corte, and Sam McKinniss. While each of these artists deals with the consumerist glut of our present moment in their own way, Sammak more than any has eluded categorization: his work slip-slides between video, painting, and sculpture and rarely commits to two or three dimensions, with his sculptures, for instance, having an intensely pictorial quality. Turning common objects into eye-catching behemoths, Sammak highlights the treasures that exist within our cultural trash heap.