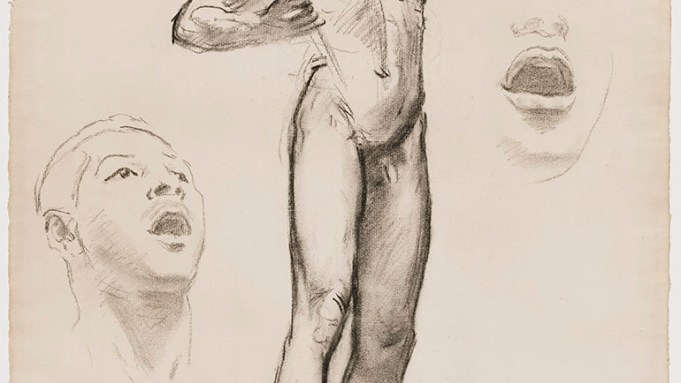 A fortuitous elevator encounter between two men at a posh Boston hotel in 1916 resulted in a relationship that was instrumental to the creation of some of the most celebrated artworks of early twentieth-century America. One man was the affluent, internationally acclaimed white portraitist John Singer Sargent, and the other a young working-class black elevator attendant, Thomas McKeller, whose handsome looks and muscular body caught the artist’s attention. Over the next decade, until Sargent’s death in 1925, McKeller was the primary model for the artist’s projects in the United States, including the monumental murals and bas-reliefs he created for the rotunda at the Museum of Fine Arts, Boston (completed in 1925). Showing vignettes from Greco-Roman mythology, the allegorical murals were intended to highlight the museum’s responsibility to promote and preserve the arts. In them, Sargent transformed McKeller into a number of characters—both male and female, and invariably white-skinned. Only one painting of McKeller by Sargent shows the model’s actual skin tone: an intimate nude portrait that the artist never publicly exhibited, Thomas McKeller (1917–21), in which McKeller boldly bears his chest, his legs apart. Read one way, the work might testify to Sargent’s desire for, or perhaps control over, his vulnerable subject. Yet at the same time, it can be seen as empowering, a rare representation of the model as he actually looked.

“Posing Modernity: The Black Model From Manet and Matisse to Today

The exhibition “Boston’s Apollo: Thomas McKeller and John Singer Sargent” at the Isabella Stewart Gardner Museum—scheduled to be on view through September 14, though the museum is currently closed—explores how this uneven relationship between artist and model was structured by differences of race, class, age, and possibly sexuality. (Many scholars have suggested that Sargent, a lifelong bachelor, was gay. McKeller eventually married, in 1934.) In addition to Sargent’s painted portrait of McKeller, the show includes a previously unexhibited portfolio of the artist’s preparatory drawings for the MFA rotunda murals, which he gave to Isabella Stewart Gardner, his friend and benefactor, in 1921. These charcoal studies, discovered by the exhibition’s curator, Nathaniel Silver, in 2017, show McKeller in a number of poses, emulating figures ranging from the bowman Achilles to the singing personification of Romantic Art. Unlike the final murals, these drawings sensuously portray McKeller’s body without concealing his racial identity.

The drawings and portrait are accompanied by archival correspondence and a detailed timeline charting details of Gardner’s, Sargent’s, and McKeller’s biographies alongside concurrent social and cultural shifts in Boston, from the Jim Crow era until the passage of the Civil Rights Act in 1964, two years after McKeller’s death. Mapping out the worlds in which McKeller, Sargent, and Gardner lived, these supplemental materials effectively make the case that narratives of modern American art cannot be segregated from black history. In an introductory video by the show’s entrance, McKeller’s last living descendent, formerly unaware of her ancestor’s modeling, is acquainted with this remarkable history. Although the video, with its tinge of melodrama, recalls an episode of Henry Louis Gates Jr.’s “Finding Your Roots,” it grounds the exhibition in a lived reality, fleshing out McKeller as a real person with a family and community rather than simply an anonymous model.

Silver invited local scholars and artists to write responses to the works. While these responses, which are displayed as wall labels, sometimes impose contemporary ideas about race, class, and sexuality on material from the early twentieth century, they are the most compelling part of the exhibition. Some contributors offer interpretations of the drawings, while others speculate about the charged relationship between artist and muse. In one text, artist Steve Locke, a gay black portrait painter who lived in Boston for many years, casts figurative painting as a collaboration between artist and model.

Exhibitions rarely give models their proper due, particularly black models, whose contributions to art history have regularly been overlooked. A notable exception is “Posing Modernity: The Black Model from Manet and Matisse to Today”—a landmark 2018–19 show at Columbia University’s Wallach Art Gallery that traveled, in modified form, to the Musée d’Orsay and explored the significance of Laure, the model for the black maid in Manet’s Olympia (1863). “Boston’s Apollo,” with its nuanced analysis of power and race, rigorously contextualizes the relationship between McKeller and Sargent, ultimately positing that McKeller was not simply a model but a cocreator of the works for which he posed.