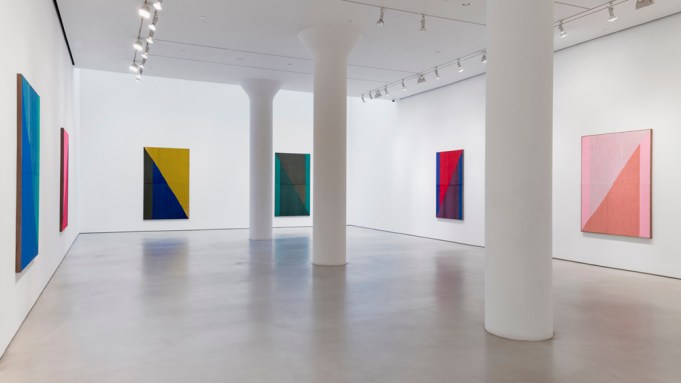 Anni and Josef Albers did not have children. If they had, the kids might have grown up to make work like Brent Wadden’s. The Canadian artist uses Anni’s medium, weaving, to create abstract “paintings” whose color interactions would have made Josef proud.

Wadden trained as a painter, but he has been working exclusively as a weaver for almost a decade now, producing textiles by hand. Ten new examples were on view in his recent exhibition at Mitchell-Innes & Nash, “Second Life.” All but one were variations on a single theme, consisting of vertical compositions bisected by diagonals formed by transitions between different colors of yarn. The exception, a tripartite horizontal composition, shared this basic language. The diagonals wobble pleasantly as they make their way across the pieces, their irregularity the result of Wadden’s inexactness as he weaves, and the slight distortion of the textiles that occurred when they were stretched for their framed display. A machine loom—or a more careful weaver—could have created perfect vectors. But those were not what Wadden was after. Like many other artists who have adopted fiber in recent years—such as Josh Faught—he has said that he prizes his own inexpert craftsmanship, seeing it as a means of infusing his work with an expressive touch.

Object Lessons From the Bauhaus

When he began weaving, Wadden employed a black-and-white palette, the better to emphasize his structural decisions. Color has become increasingly important to him, and for the works in this show, he ventured into vivid polychrome: bright oranges, deep blues, rosy pinks. The yarns are miscellaneous wools, cottons, and synthetic fibers, all sourced online from amateur weavers’ unused stashes. (Perhaps this recycling explains the exhibition title.) The mix of materials introduced further variation to the proceedings, with similar but not-quite-matching yarns creating striations in Wadden’s color blocks, and tightly spun yarns contrasting with mohair-like texture.

The vertical works are perfectly proportioned to a smartphone screen, perhaps a slight concession to digital consumption in a show that otherwise demanded in-person viewing. Their upper and lower halves are made up of separate woven lengths that have been turned sideways, so that the fine white warp runs left to right and the thicker weft vertically. The seams between the lashed-together halves function as something like a horizon line, affirming the textiles’ pictorial status.

As this slightly technical description may suggest, although Wadden positions himself in the lineage of abstract painting—his works echoing those of Richard Diebenkorn, Bridget Riley, and Agnes Martin—it helps to know a little about craft and its history to appreciate what he is up to. The details of process and materials, and the cultural associations of the handmade, give his pieces some of their life.

Wadden has spoken of his admiration for the celebrated quilters of Gee’s Bend and the Nova Scotia folk artist Maud Lewis. In 2014, he was included in Nicolas Trembley’s exhibition “Mingei: Are You Here?” at Pace Gallery, a consideration of the Japanese craft movement of the 1920s and ’30s and its legacy. This was an apt context for him. Like the cosmopolitan figures who formulated mingei theory, Wadden’s cultivation of the imperfect has a certain knowingness to it, even a degree of self-contradiction. To create spontaneous and serendipitous effects, he seems to require a highly structured system. He is constantly negotiating between conscious sophistication and instinctive expression, walking a line that wavers like the diagonals wending across his woven abstractions.