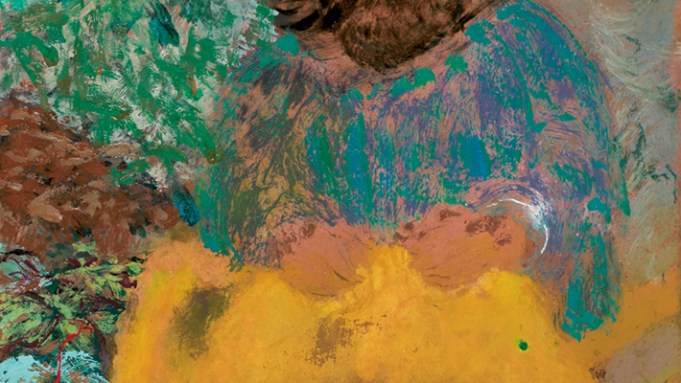 This tightly edited show of recent oil paintings and monotypes by Brett Goodroad—just eleven pieces in total—could have served as an illustration of Pierre Bonnard’s dictum that “the precision of naming takes away from the uniqueness of seeing.” Indeed, Goodroad, albeit self-deprecatingly, compared his work to that of the Nabis in an interview he gave on the occasion of his previous exhibition at the gallery, in 2015. Neither faithfully representative of the landscapes and figures they portray nor so abstract as to render them illegible, Goodroad’s latest paintings document his process of thinking through their creation, with various revisions left visible in the final works. He has refined both his instincts and his technique, trading the Easter egg pastels and long, faint brushstrokes evident in the 2015 show for an earthier, murkier palette and an expanded vocabulary of mark-making. And while his work has always indicated a ready familiarity with the various turns figurative painting took from post-Impressionism to Expressionism, the pieces displayed here never go for straight citation or pastiche.

Frequently, Goodroad will float forms in unexpected colors atop his compositions like algae blooms. Glowing in the foreground of an untitled landscape painting from 2018, for example, is a reddish-orange blob. Connected to an applelike shape above it and a pair of blue ovals below, it recalls a torso, though whether we are looking at a figure remains unclear. The dark green field in the painting’s middle distance, meanwhile, is dotted with flecks of blue and orange that give it the appearance of cooling magma. In one of two paintings on copper, Wind Mill (2017), the titular building is nowhere to be found amid the dun- and mustard-colored landscape. A burgundy-hued splotch toward the top of the image brings out the blush of overpainted pinks in the cloud bank it hovers over, and has all the drama of red wine spilled on a pristine tablecloth.

Elsewhere, Goodroad’s brushwork becomes more concentrated and rippled, further tickling one’s pareidolia. The figure in the show’s second painting on copper, a small, untitled piece from 2018, has what looks to be the face of a lapdog. Or it could be no face at all: Goodroad exploits the surface tension between paint and metallic surface to slippery effect. In Gill (2018)—a portrait done on linen—a figure decked out in clothing suggestive of historical costume (is that a segment of a ruffled collar poking out?) has a smudge of muted peacock blue where their face would be. The paint throughout Gill is swirled and mottled, showing its manipulation, save for the realistically shaded leaves in the canvas’s upper left-hand corner, which could have been cut from a wallpaper catalogue.

Four untitled monotypes (all 2018) made from the same plate—the composition having been reinked and reworked for each successive printing—show a seated figure variably enveloped in a fog of fantastic creatures worthy of Goya or fading amid a gray haze of repeated hatch marks. Humorous, odd, and packed with ambiguous detail, these prints further attest to Goodroad’s curious vision and unique handling of materials. Like the paintings, they are at once romantic in their evocation of art historical styles and almost forensic in their technique. Shorn of self-reflexivity and topicality, and eschewing any engagement with a politics of representation, Goodroad’s work offers beauty without sentimentality.