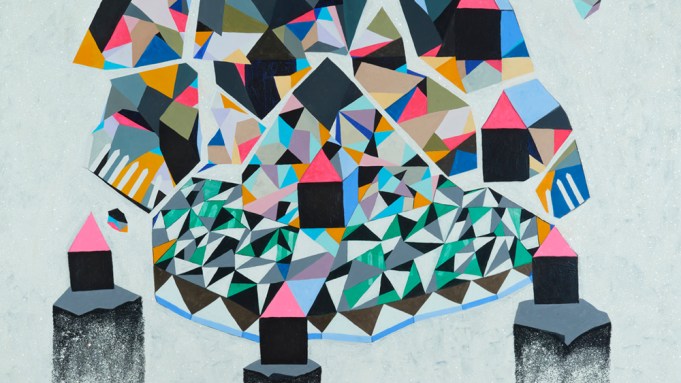 Through dioramas, quilting, painting, and other mediums, Oakland-based artist Adia Millett gives expression to values, memories, and conflicts associated with housing. “Breaking Patterns,” her show on view at the California African American Museum through August 25, collects around thirty works in a single gallery. A wall text at the entrance cites a fire at her childhood home in Pasadena in the 1990s as the traumatic event that led her to use images of the home to evoke “life and death, destruction and renewal.” Her quilts and tessellated wood panels, as well as the surreal interiors of her dollhouse dioramas, dissolve the order implied by the architectural structure of the family house. This show captures Millett almost two decades into her career. After graduating from CalArts in 2000, she moved to New York to participate in the Whitney Museum’s Independent Study Program in 2001; that same year she took part in “Freestyle,” an acclaimed group exhibition at the Studio Museum in Harlem.

The Fire Next Time (2016), a mixed-medium piece on wood panel that takes its title from James Baldwin’s seminal 1963 book, is one of the first works viewers encounter upon entering the gallery. A house surrounded by billowing smoke stands against a golden backdrop. The dwelling is made of faded blue vertical planks, with a roof of dark wooden squares. The uppermost of these shingles float off into the golden sky as the house goes up in flames. Millett presents a visual pattern in the process of breaking up. This imagery of architecture coming undone functions as a point of entry into her more abstract works.

Millett guides the viewer’s gaze to sources of visual eruption and clamor. The painting Tobacco Road (2018) is another literary allusion, named after Erskine Caldwell’s infamous 1932 novel about a family of sharecroppers in Depression-era Georgia. A stream flowing toward a red-hot sunset is buffered on either side by dark stripes. A gray path runs through this environment, starting in the bottom-right corner and twisting its way toward a distant house structure that levitates above the water in the outline of the sun. While the square and triangular tiles in The Fire Next Time are subdued, the similarly fragmented shapes here behave more tumultuously. Tracing the path, the viewer’s eye must dodge an avalanche of variously shaped shards. In the painting Snow (2018), three forms, each a black square topped by a pink triangle, rise from the base before a cluster of shattered polygons. These pairings of squares and triangles—which resemble schematic houses—reappear within the cluster. In some spots they maintain their outlines, while in others they lose them and drown in the dense smattering of colors. Clouds of snow loom at the bottom, rising as if to erase the forms. Again, the rampant breakage challenges the notion of the home as a source of comfort and stability.

Millett pursued the same theme in earlier dollhouse works, which stand on a long plinth in the gallery’s center. Peering through a window into the one-story assemblage When I Was a Little Boy (2011), the viewer sees tiny light bulbs placed in a grassy field and red arrows stuck in the walls, motifs that invoke childhood play and the typically boyish obsession with battle. The shed-like structure Capital Gain (2011) similarly balances confined space with flights of fantasy. Two ships dangle from translucent strings attached to the ceiling, floating on either side of a row of shrubs with dollar bills for foliage. Greed, as represented by these money trees, sidelines the ships’ imaginative connotations and emphasizes instead their commercial function for transporting goods.

The large-scale quilt piece Section 8 (2016) is named for a national voucher program that helps low-income tenants afford monthly rent. The work consists of eight quilts hung with gaps between them, loosely forming the shape of a house. The positioning of these quilts—so close to touching but not—comments on the failings of Section 8 as a government policy. Applicants must wait a long time before a housing option opens up and, when one finally does, they can potentially face discrimination based on their income status. At the beginning of this year, Los Angeles County voted on a motion to combat the high rate of landlords denying housing to local voucher-holders, and last November senators Tim Kaine and Orrin Hatch introduced the Fair Housing Improvement Act before Congress, with the same goal in mind. Millett addresses the policy’s lack of guarantees, but at the same time, she seems to think that it shouldn’t be broken apart and discarded; the fundamentals should be retained in some manner. This work moves “Breaking Patterns” as a whole from a display of brilliant technical abstraction toward political engagement. The artist’s concern with destruction and renewal reflects the ambivalence of reformism: although our current political economy has not abolished affordable housing and certain other need-based policies, it hasn’t made them totally effective, either.