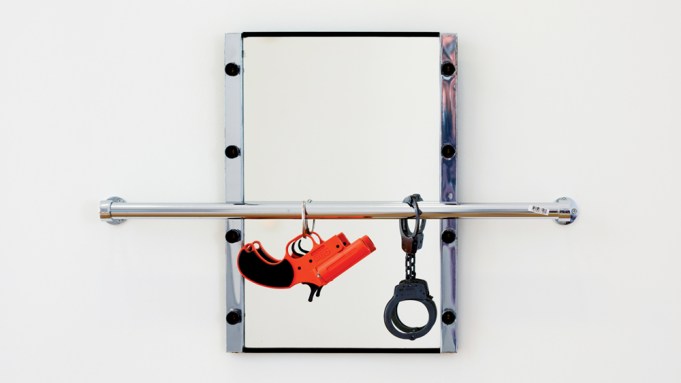 Bolted down. Screwed tight. Fenced in. Locked up. Though Cady Noland made most of the work in her exhibition at the Museum für Moderne Kunst (MMK) during the Reagan and Bush Sr. years, it could not feel more contemporary in this era of carceral capitalism, to borrow Jackie Wang’s term for new strategies of control ranging from algorithmic policing to predatory lending. Curated by Susanne Pfeffer in close dialogue with Noland, this retrospective is the first major presentation of the Washington, D.C.–born sculptor’s influential yet elusive practice in twenty-two years. (She had an exhibition at the Wadsworth Atheneum in Connecticut in 1996 and has declined invitations for solo shows ever since.) Noland’s art of confinement hot-wires a distinctly American combination of violence, celebrity, and politics. What does it mean that this work is now on view in a show in Germany that will not, as of yet, be traveling to the United States?

All three floors of the MMK’s Hans Hollein building—a recently renovated triangular structure—have been given over to the exhibition. All of the works are dated between 1984 and 1999 except for two: a 2005 tire-and-rod combination from her studio, and a 2008 work consisting of a metal basket containing motorcycle helmets, subway straps, and other objects. Choice cuts from the museum’s collection by artists such as Michael Asher, Steven Parrino, Charlotte Posenenske, Sturtevant, and Andy Warhol have been put on view, inflecting, in different ways, the menacing, nihilistic arrangements that Noland has forged from the detritus of American life. Guns, handcuffs, stockades, barricades, and American flags are omnipresent. Her compositions can seem at once random and chillingly precise, evoking the logic of the psychopaths, serial killers, and assassins she has taken as subjects in her work. She has often used media images as raw material, silk-screening photos referencing Charles Manson and his coterie, Lee Harvey Oswald, Jackie O, Patty Hearst, and Ronald Reagan onto aluminum sheets that she props up or bolts to the floor like carnival cutouts. Her works act detached, but they know how to draw you in.

A number of Noland’s signature installations comprise handrail-style bars bolted horizontally to the wall and mounted with assortments of quotidian objects. Even the most benign materials become charged through their proximity to tools of domination and control: The Big Slide (1989) features metal O-rings, a dish rack, two American flags, a red-tipped support cane, a reacher tool, and a chrome bracket; Push Papers (1986) presents a baton holder, a leather badge with a metal coat of arms, a leather pencil holder, a dozen metal rings, and a publication put out by Guns & Ammo magazine; The Mirror Device (1987) reflects the viewer in a vanity mirror overlaid with handcuffs and a flare gun. The objects in such works are hung enticingly within arm’s reach, just one rash decision away from being grabbed—an impulse curbed by the fact that most of them are secured to the bars and all are subject to museum surveillance.

The aura that surrounds Noland comes in part from the performative way that she has exhibited and activated sculptures in the past, as well as the rarity of her work in exhibition contexts in recent years, where it has appeared mostly piecemeal, in collection or group shows. At White Columns in 1988, for her debut exhibition, Noland blocked the venue’s entrance with a pole so that you had to duck under it to enter. For a solo show at a commercial gallery in Santa Monica two years later, she requested that staff dress in country-Western attire and answer the phone with “Howdy!” At Documenta IX (1992), she created an installation in an underground parking garage that interspersed works by her and her friends with a vintage Camaro and an overturned cargo van with smashed-in windows. At Paula Cooper Gallery in 1994, she exhibited, among other works, four stockade sculptures into which visitors were invited to lock their necks, arms, and legs. After a 2000 group exhibition at Team Gallery had closed, she specified that the sculptures she had contributed—barricades made from white A-frames and wood—were to be destroyed. “Like a serial killer disposing of a body, the gallery was ordered to take apart the work and to place the pieces into separate trash bins around the city,” Parrino, a close friend of Noland’s, later recounted. Such actions now circulate secondhand as lore, adding a narrative dimension to Noland’s otherwise impassive works. (Parrino claimed that Noland’s works were deeply personal and reflective of her fears and fascinations, but this is hardly apparent to outsiders.)

Noland once expressed a preference for exhibiting her works in situations that are “a little permissive” and “a bit dirty,” but the MMK exhibition is decidedly well behaved, composed of high-profile loans that are impeccably installed in crisp, multivalent juxtapositions. A tire swing seen in an enlarged photograph of the remains of the Manson family ranch rendered in black ink on aluminum (Trashing Folgers, 1993–94) is echoed by a tire-swing sculpture (My Amusement, 1993–94) visible across the museum’s atrium as you look at the two-dimensional image—a canny and effective configuration. There are Easter eggs in the show, too: on the second floor, installations by Claes Oldenburg and Joseph Beuys on permanent display have been seamlessly walled off and concealed from view. Pfeffer says that the decision was practical—the works couldn’t be moved and didn’t fit within the exhibition’s purview—but it comes off as a delicious power play, especially coming from two women. Noland’s gender isn’t an explicit topic of her work, but through her aggressive combination of macho items, it materializes in relief. In interviews, she has articulated hilarious, scathing critiques of patriarchal power.

Though Noland’s absence from the art world hardly seems like a performance or a ploy, the limited circulation of her work has inevitably become part of its reception. In recent years, she has made headlines for disavowing pieces owned by collectors or dealers that she deemed damaged or destroyed by restoration processes. (The stakes are high; in 2011 and 2015, her sculptures set auction records for the highest price paid for a work by a living female artist.) Unauthorized presentations of her work have been accompanied by disclaimers at her request. According to Sarah Thornton’s book 33 Artists in 3 Acts, when Larry Gagosian told Noland that he intended to do a solo show of her work in 2013, she told him she would shoot him if he followed through. At a moment when collectors, trustees, and the market exert outsize influence on contemporary art, Noland’s principled, uncompromising stance has rightfully earned her many admirers. She is one of the most intelligent and incisive artists of her generation. Shouldn’t America see this work?

Noland has chosen an apt time to break her silence. Her repertoire of materials cannily anticipated the realities of life in the United States today: downward mobility, toxic masculinity, police violence, mass shootings, rampant incarceration, and the rise of white supremacy. Her use of structural barriers—chain-link fences, scaffolding, corral gates, and aluminum sheets silk-screened with brick wall motifs—is newly resonant in light of the detention of asylum seekers and Trump’s quest to build a wall at the Southern border. The potent blend of politics, celebrity, and violence that she examines has reached new levels of surreality under the current US administration. Her 1989 essay “Toward a Metalanguage of Evil” is a quasi-sociological study on the correlations between the psychopath and the “entrepreneurial male.” The two, she wrote, citing the work of psychiatrist Ethel Spector Person, share “societally sanctioned characteristics. . . . Their maneuvers are differentiated mostly by decibel, the acts of the psychopath being the ‘louder.’” In a 1994 interview with Mark Kremer and Camiel van Winkel, she described the essay as a critique of “a model of the entrepreneurial male whose goals excuse any and all sorts of egregious behavior if those goals are met with success.” That sounds familiar.

Yet precisely because Noland is so good, you want her to do more. Why is her first significant exhibition in more than two decades happening in Germany? While Germany has its own stark history of violence to contend with, the cultural specificity of her practice becomes abstracted there. The artist has spoken of a particularly American form of nihilistic pleasure that informs her work: throwing trash out your car window driving down the highway; deifying celebrities, then dragging them through the mud; damaging public property for kicks—because who cares, nothing matters, so why the fuck not? Speaking with Michèle Cone in 1990, Noland observed that in America, violence and anger are “safety valves” that can release steam in the absence of a viable language of dissent and a political system capable of representing different interests. “Hostility and anger are vented without threatening the structures of society,” she explained. It’s been nearly three decades and not enough has changed. American democracy is in ruins, and Noland’s nihilism remains appropriate. Even so, she developed most of the work on view in response to the late-twentieth-century American social landscape, and we need to talk about the present. Cady, are you there?

Editor’s note: an earlier version of this review stated that Noland exhibited her sculptures in the 2000 group show at Team Gallery on the condition that they be destroyed afterward. According to the show’s curator, Bob Nickas, the works were exhibited without this precondition. The decision to dismantle them and disperse their parts came after Noland had rejected all the collectors. The text has been corrected.

Bulgari Is Opening a Private Island Resort in the Maldives

Secret Service Has Been Chattering for a Year About Trump’s Jan. 6 Capitol Tantrum: Report