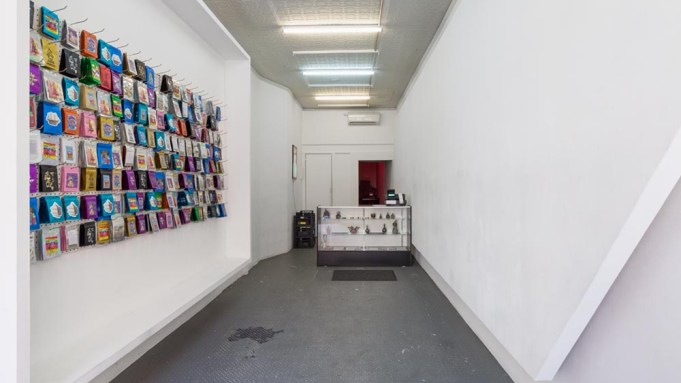 In Candice Lin’s installation Spice, on view at Ludlow 38 in New York through July 28, small packets of herbs decorated with eye-catching graphics hang from hooks on a large pegboard, resembling packets of synthetic cannabinoids like K2 and Spice, which the New York State government outlawed in 2015. Lin’s packaging takes up Orientalist tropes: a shiny purple bag advertises THIRD EYE in silver letters; the phrase SUPER STRONG MONGOL VIRUS accompanies an image of a warrior emerging from flames on horseback; and a cat dressed like a genie proclaims, YOUR WISH IS MY COMMAND in a puff of smoke. The contents are a blend of California poppy, damiana, mullein, sage, and wild lettuce, and the “supplement facts” on the labels are actually fragments of a science-fiction narrative that Lin wrote partly from the perspective of yeast. Visitors can buy the packets for $10 each.

Spice transforms the front room Ludlow 38 into a sort of smoke shop. Just beyond the pegboard, a commercial display case is stocked with, among other items, glass pipes, handmade ceramic vessels and sculptures, and photocopies of pages from a 1958 book titled The Opium War Through Chinese Eyes. An old-fashioned cash register sits atop the case. A red-lit back room is lined with boxes for products including pu-erh tea, Reese’s Peanut Butter Cups, and spring roll wrappers. Referencing the trade routes established under colonialism and reshaped over centuries, Lin’s collection of objects hints at the violence underlying global commerce. The installation also includes a sculpture that offers a more direct glimpse of the conceptual underpinnings: a glass distillation apparatus that liquefies tobacco, sugar, hemp fiber, and California poppy sits atop a hotplate and a stack of books including the aforementioned Opium War Through Chinese Eyes and a historical study titled Coolies and Cane, literalizing the confluence of commodities and cultural practices that occurs in colonial trade circuits.

Lin frequently explores themes concerning the circulation and valuation of natural materials, the lingering residues of colonialism, and questions of authenticity surrounding race, gender, and cultural affiliation. In the most recent edition of the Hammer Museum’s Made in LA biennial, she exhibited an installation, La Charada China (2018), featuring a sculpted mound imprinted with a human body and seeds of opium poppy, sugarcane, and poisonous Caribbean plants dispersed throughout. These seeds not only have significant effects on individual human bodies, but point to the interconnected routes of Chinese laborers migrating to the US and the transatlantic slave trade. Fuchsia grow lights and a rudimentary irrigation system encouraged them to sprout. In front of the mound, Lin made a kind of altar, with clay vessels, a gourd, glass jars and bottles containing various substances, and a small model ship, at once imbuing the installation with a sense of the sacred and pointing to the tangible artifacts of (forced) migration and trade. Spice similarly compiles materials alluding to histories of global commerce—of drugs, art objects, foodstuffs, and people—and the racist stereotypes they have created. In addition to the pages from The Opium War Through Chinese Eyes, the display case contains two paintings by Lin, Orientalist Opium Den (after Georges Barbier 1921) and Staged Opium Den 2 (both 2019), that directly reference the trope of the opium den—a space that was shaped by Orientalist conceptions of Asianness as both alluring and illicit, and that still serves as dubious inspiration for hotel bars in Chinatown, where Ludlow 38 is located.

[Read about a project by Lin addressing trade and colonization in the Americas here.]

Lin treats drugs and chemical reactions as ciphers for questions of purity, intoxication, and toxicity that have long pervaded white, Western conceptions of racial difference. The packaged plants appear to have been chosen for their medicinal or intoxicating effects. Damiana can treat gastrointestinal issues and has historically been used as an aphrodisiac. Mullein has been administered for respiratory issues since Roman times, and various cultures have used it to treat sore throats, earaches, and rashes, as well as for cosmetic purposes. California poppy, while not an opiate, can be used as a sleep aid or relaxant. Lin presumably hopes some viewers will purchase the herbs and smoke them or make tea from them. Like Hormonal Fog (Study #3)—a 2017 installation Lin made in collaboration with Patrick Staff in which a fog machine emitted what the artists called “hormonal smoke,” infusing the air with natural materials, such as licorice and black cohosh, that inhibit testosterone production—the components of Spice are intended to act on both the viewer’s body and the sociopolitical relations at play in and around the exhibition space.

Spice might be read as a response to anti-Asian racism in the New York art world and related discourses around authenticity, particularly as prompted by Omer Fast’s fall 2017 exhibition at James Cohan Gallery, “August.” For that exhibition, Fast—a white Israeli-American artist—remade the commercial gallery into a derelict Chinatown business, shabbily outfitting the space with cheap tiling, folding chairs, broken ATMs, and cell phones in display cases, as well as red paper lanterns and beckoning-cat figurines, all stereotypical signifiers of Chinatown. James Cohan is located around the corner from Ludlow 38, in a part of Chinatown that is gentrifying rapidly, due in no small part to the influx of contemporary art galleries. Activist groups and others (led by Chinatown Art Brigade) criticized Fast’s show for relying on racist stereotypes and making light of displacement and erasure—for, in the words of protesters, “treating Chinatown like poverty porn.” To render the familiar strange through a change of context is a primary tactic of conceptualism. Yet the strategy becomes suspect when, as in Fast’s “August,” it naturalizes and even encourages the defamiliarization wrought by gentrification, in which neighborhoods are made unrecognizable to those who have lived in them for years.

Lin’s project complicates this strategy, essentially remaking Fast’s re-creation in order to challenge the neutral conceptual basis that he and his defenders claimed for it. Chinatown now hosts “some 130 art galleries, a significant majority of which are white-owned,” as Harry Burke noted in this magazine last year; these spaces “trade in global markets to support emerging artists while availing themselves of the low rent and cultural cachet of long-neglected neighborhoods.” While Fast was rightly critiqued for employing racist stereotypes and contributing to displacement in the area while making light of its effects, Lin pushes the line of inquiry raised in response to his installation further, asking not only who has the authority to represent, but how that authority is itself shaped by centuries of global trade and exploitation. Fast’s exhibition is implicated in the forces displacing longtime residents of Chinatown, but so is Lin’s—so, effectively, is each new contemporary art exhibition in the Lower East Side, regardless of who the artist is. Sharply attentive to this fact, Lin has produced an installation in which everything is potentially intoxicating, laced with latent violence and the myth of authenticity, anything but pure.