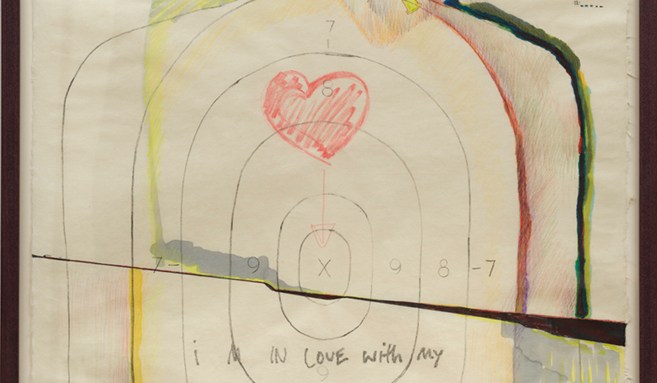 The dominant image in Cara Benedetto’s latest exhibition at Chapter NY, “Blood from Stone,” was the human target used for shooting practice. Five lithographic prints with the male silhouette, concentric rings, and scoring box rendered in grayish black ink hung around the gallery. It was a menacing scene, an eerily quiet stage for the artist’s meditations on structural and physical violence.

Each print was unique, bearing colors, shapes, and phrases Benedetto had added by hand. In genius penis (all works 2018), a drawing, in colored pencil, of a face resembling the mask the killers wear in the Scream movies haunts the center of the target’s torso. Its eyes are a tearful blue, and the long mouth is shaded in a way that makes it look like a protruding red tongue. The face could belong to either a victim or an aggressor. In paid/pain, the statement 0 PEOPLE DIDN’T FIND THIS USEFUL is written tenderly in red on the target’s head, while I’M IN LOVE WITH MY FATHER is scrawled across the belly. PAIN lurks upside-down in the lower right corner, emerging from a washy field of blue. On the opposite wall, [our world] hung alone. Benedetto added only a few pencil markings to this work: some circles where the ink adhered poorly. After this print was made, the lithographic stone split in two. The two pieces lay on a plinth in the center of the gallery, where viewers could examine their smooth, plasterlike surfaces.

Lithography is an antiquated technique. It was used extensively in the nineteenth century to produce high-quality multiples, but cheaper, simpler technologies made it obsolete, and today lithographs appear mostly in educational contexts. Benedetto teaches printmaking at Virginia Commonwealth University. She used the school’s facilities to make the work in the show, and enlisted her students to assist her in the process. The warmth and handmade qualities of these collectively produced prints mark a departure from the work that Benedetto is known for. Though she is a master printmaker, most of the two-dimensional works she exhibited in the past were digital collages. Her last show at Chapter, in 2014, featured banal photographs of landscapes overlaid with sans serif text and nonsensical infographics, low-grade distortions of motivational posters and PowerPoint slides. In those works, the slick impersonality of the design and the gnomic impenetrability of the text estrange her messages of desire and feminist erotics. Such messages appeared in “Blood from Stone,” too. At the heart of the target in missing is the stylized flame of the Tinder logo, and there’s the declaration of incestuous longing in paid/pain. But in contrast to Benedetto’s earlier work, the visual environment for these feelings is raw and exposed. The reference to the shooting range brings the desires that flourish despite (or because of) the everyday structural violence of capitalist patriarchy into contact with the physical violence of guns, and expressions of a woman’s vulnerability appear where bullet holes would be.

Benedetto’s “old style” appeared in a mural-size vinyl print that covered the gallery’s rear wall. In the work, a surreal prose poem about a school of mute teachers was superimposed on a blown-up image of the space above the artist’s desk at VCU. Benedetto doesn’t treat pedagogy as a utopian project, as some in the art world do. She regards it as a space of negotiation and struggle, pervaded by the same forces of oppression that affect the rest of the world. (Another text piece, stuffed in envelopes near the exit for viewers to take away, conveyed this most directly, with a list of contradictory demands and complaints about institutions.) Perhaps this is no shocking revelation at a time when schools are haunted by the specter of mass shootings. But the split stone at the show’s center emblematized the problem: the process of learning takes collective effort to manage, and excessive force from without can make it fall apart.