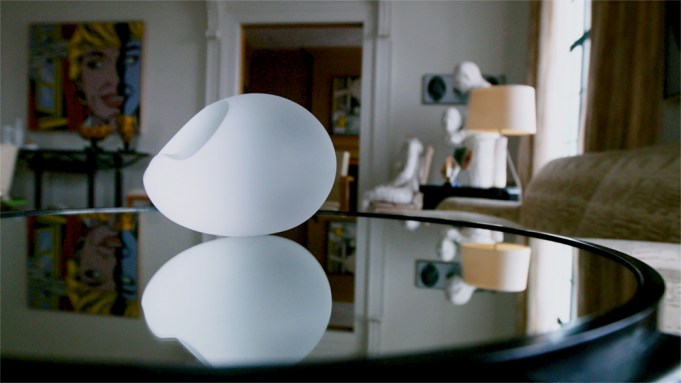 Carissa Rodriguez’s exhibition comprised two videos she shot twenty-one years apart. The Maid (2018), newly commissioned for the show, is a slick, wordless drama of objects set primarily in private interiors, while The Girls (1997–2018) is a grainy, casual document of urban public space filmed on Hi8. Together, the two point to various entwined and still-unfolding societal and cultural relationships, while also demonstrating the development of Rodriguez’s filmmaking techniques.

The Maid, which played on a large screen in the main gallery, is titled after a 1913 short story by Robert Walser in which a maid searches for years for a child to whom she had once served as caregiver. The video centers on two of Sherrie Levine’s remakes of Brancusi’s Newborn, a small egg-shaped sculpture of an infant’s head, rendered in marble in 1915 and cast in bronze in 1920. This century-long chain of dialogue between artists is one of many linkages found in Rodriguez’s twelve-minute video, which crafts a narrative of circulation and reproduction: of artworks, art histories, and capital.

In a review of Levine’s 2011–12 retrospective at the Whitney Museum of American Art in New York, Roberta Smith noted that Levine’s take on the Brancusi head “veers too closely to museum-gift-shop fare.” Yet the two examples that Rodriguez filmed in collectors’ homes assume a magnetic aura. The camera lingers on and circles the pieces, one of which is in frosted translucent crystal and the other in opaque black glass. They are depicted lovingly and seem almost to have an innocent quality, recalling the child in Walser’s short story, who was “delicate as a moonbeam, pure as freshly fallen snow, and as lovable as the sun.” At other points, we see art handlers with gloved hands gingerly unpacking the works in a sterile storage facility. Languid shots pan over other works in the residences (On Kawaras cast in a late-afternoon light, Warhols hung in a wood-paneled room), and sweeping aerial views show the exteriors of the homes (a glassy modernist box in Los Angeles, a parkside apartment building in New York). What might otherwise be a cold sociological view of the inner workings of an upper tier of society develops an odd emotional resonance. In the video’s final moments, the instrumental soundrack swells to an affecting melodic crescendo.

But a din bled into the gallery from the side space where The Girls was screened, a reminder of the world outside that in which The Maid immersed us. With The Girls—filmed early in the artist’s career—Rodriguez’s role as observer and even interloper is more conspicuous. She shot the footage on a playground in Manhattan’s Chinatown—not far, in fact, from Reena Spaulings Fine Art, where she was a director from 2004 to 2015. Children move within and around a play structure with metal slides. Her close-roving handheld camera zooms in curiously on details (cartoon illustrations on clothing, a mother’s hand on a stroller), but returns to the gestures and expressions of particular children. In one series of shots, a girl wearing pink sweatpants and Velcro shoes peeks out from behind her mother and stares directly at the camera. She appears wary of its presence, looking to Rodriguez with a seriousness that breaks from her otherwise playful interactions.

Both videos concern the products of various types of relationships—artistic, financial, sexual, or otherwise. We know that Levine’s renditions of Brancusi’s Newborn will continue changing hands along secure circuits of the cultural elite. We know that the children from the playground would now be adults, and that the neighborhood they were filmed in has been gentrified in part because of the relationships between the artistic communities Rodriguez belongs to and real estate development. But lodged somewhere in these portrayals of the odd innovations that result from artistic exchange and of the chaotic activity of children is the sense that the outcome of any coupling is largely unpredictable, just as a reproduction is never an exact copy.