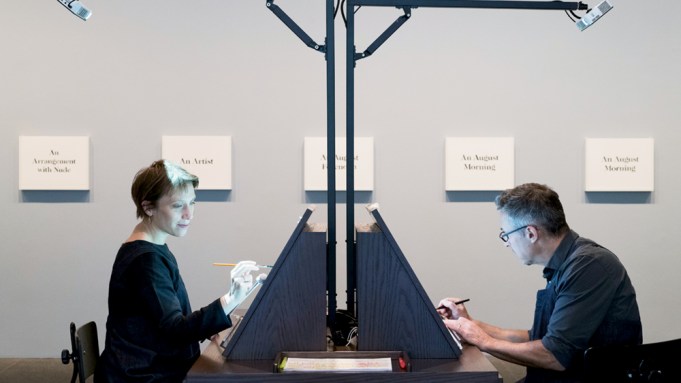 On each day of the 57th Carnegie International’s run, two calligraphers sit at easels in the center of a first-floor gallery. A projector beams words onto pieces of heavy-stock paper to be traced in black ink. The artists slide their finished works into frames that line the gallery walls, replacing ones where the ink has dried; those are slipped into plastic envelopes and left on a table where visitors are welcome to take them home. The painted words are titles of works submitted to the Carnegie International from 1896 to 1931, when the exhibition was selected from responses to an open call. By the time the latest edition closes, all 10,632 rejected submissions will have been commemorated in alphabetical order in these paintings. On the day I saw the show, in mid-November, the project passed from “F” titles to “G” ones, with From an Old Fashioned Garden being written in the morning and Garden Flowers in the afternoon. The somber, lovely tracings were eagerly taken home by visitors as souvenirs.

The work is called Fruit and Other Things, after one of the rejected submissions. It was conceived by Lenka Clayton and Jon Rubin, a pair of artists who work on social practice projects in the Pittsburgh area, and is a reminder that artistic fame is made possible by the work of unseen multitudes—what Gregory Sholette memorably called the “dark matter” of the art world. Recognizing the under-recognized is also the theme of the International’s most dramatic gesture, Tavares Strachan’s Encyclopedia of the Invisible. The museum’s neoclassical facade is inscribed with a ribbon of great men’s names, and Strachan has overlaid them with other names in neon: BALDWIN OVER FRANKLIN, MONK OVER DARWIN. A central sign alters the dedication itself: TO THE PEOPLE THAT HAVE BEEN MADE INVISIBLE THROUGH THE MECHANISM OF HISTORY.

Thelonius Monk and James Baldwin, while perhaps less esteemed than Benjamin Franklin and Charles Darwin, aren’t exactly “invisible,” and other works that gesture toward inclusion, like Clayton and Rubin’s, seem at odds with the tight curation of the exhibition, which features work by only thirty-two participants, many of whom (Mel Bochner, Koyo Kouoh, and Lynette Yiadom-Boakye, to name a few) already have established careers. But their solemn memorial air enhances the gravity of the lyrical meditations on ephemerality found in other works. This effect is most striking in the museum’s Hall of Sculpture. Photographs from Zoe Leonard’s series “Prologue: El Rio/The River,” which capture murky whorls in the waters marking the border between Texas and Mexico, line the walls of the balcony, interrupted by an alcove displaying Yuji Agematsu’s delicate sculptural compositions made from chewing gum, stray hairs, and other bits of refuse he finds on daily walks around New York. Postcommodity covered the hall’s floor with pieces of rusty metal, coal, and broken glass in an irregular, angular pattern, an allusion to the evanescent art of sand painting. The installation is used periodically as a score for a jazz improvisation. When the show ends, its materials will be returned to the sites they were salvaged from.

As one of the few periodic exhibitions that take place in encyclopedic museums—biennials are usually housed at contemporary art centers or repurposed industrial spaces—the Carnegie International always carries some degree of institutional critique, due to the friction generated by temporarily exhibiting the new alongside more permanent displays of preserved historical legacies, including those on a geologic scale, since at the Carnegie the Museum of Natural History adjoins the Museum of Art. Lynne Cooke and Mark Francis emphasized the setting in their 1991 edition, and curators have been reckoning with it ever since. Ingrid Schaffner, head of the current edition, has taken care not only to critique the museum and articulate its problems, but also to affirm what makes it special. The slogan she chose for the exhibition is “Museum Joy.” She modeled the accompanying book after a travel guide, with a quasi-anthropological description of the contemporary art exhibition meant to soothe and entice the curious but uninitiated visitor, and to frame the viewing experience as a journey of discovery. Notably, this edition of the International marks the first time a periodic exhibition has paid fees to participants according to the standards set by WAGE, a group that advocates for equitable financial structures in the arts. And so the memorializing projects by Strachan, Clayton, and Rubin are complemented by earnest attempts to engage audiences and fairly compensate the artists whose labor made the show possible. This is an active form of critique that doesn’t just point to failings of the past and present but sets things right for the future.