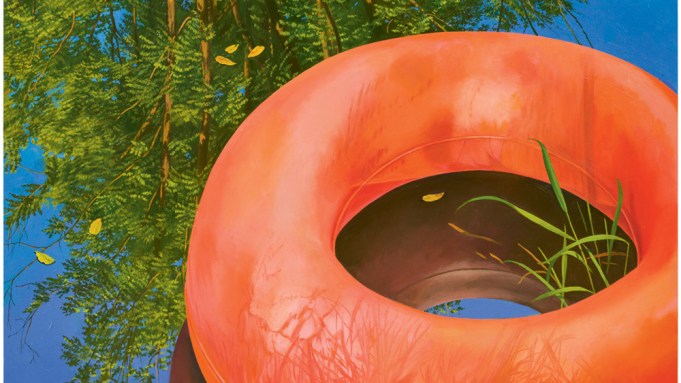 Catherine Murphy’s oil-on-canvas Clasped (2013), the most unsettling work in this exhibition of nine paintings and five drawings, is a close-up view of (presumably) a seated woman dressed entirely in black. The focus is her two gloved hands folded on her leather purse. Her face is far outside the frame. In the shadows and the creases of her gloves, black becomes blacker, offset by touches of color incorporated into the tight brushwork. We are given so little of this woman, yet Murphy, in making us watch her so intently, compromises her privacy. Are we viewing our subject in transit, perhaps on her way to a funeral? In a waiting room? What of the woman’s unseen gaze? Is she watching us back, and if she is, what does she see? Murphy makes us keenly aware of the matter of viewing, forcing upon us its intimacy and its potential for self-revelation.

“One can always watch,” wrote Rilke. Over a five-decade career, Murphy has observed the mundane details of her surroundings, showing us how even the homeliest item can be profound. The diptych Shift (2016) portrays two circles of pie dough, one rolled out on a counter and the other resting in a pie dish, while the painting Cherry Pie (2014) shows a finished dessert, though a chunk of its top crust has been removed, exposing the cherries gleaming within. While the former work alludes to the labor of making, the latter suggests its potential undoing.

Sometimes Murphy seems to delight in visual sleight of hand, as in two pieces that complemented each other in the show: Painting Drawing Painting (2017), a large, mainly grisaille painting that depicts a graphite drawing, pinned to a wall, of a deer in a landscape; and Flat Space (2016), a graphite drawing of a studio table littered with rough sketches and a small painting that, by dint of being drawn in graphite, becomes a grisaille. What, Murphy seems to ask, is color anyway? What of the false dichotomies of painting and drawing, inside and out, surface and depth?

In Becalmed (2017), a vermilion-colored inner tube with long blades of grass poking through it appears stranded at the edge of a river or pond. The tube’s surface subtly reflects other tufts of grass nearby, while the water mirrors green treetops and a sapphire sky. Murphy has stealthily collapsed a vast space into a single plane. Despite the vivid palette, a melancholy prevails in this scene, which—given the abandoned toy, the handful of tiny golden leaves floating on the water—feels like late summer. In the aptly named Floribunda (2015), a pile of broken crockery with a rose design sits atop a rose-patterned tablecloth. We slowly disaggregate the two represented gardens, a pleasurable enough activity, then find ourselves reckoning with the implications of the scene—its absent human players whose activities have left traces of both accident and intent. Murphy suggests the material world’s many instabilities even as she seduces us with that world’s concreteness.

Murphy’s drawings are meant to stand alongside her paintings as a production of equal stature and labor. The particular selection on view here narrated life in the studio, portraying details like an absurdly long extension cord lying coiled on the floor; a work shirt draped over a chair back; a stretch of smudged and scratched white lath wall with a butterfly graffito. This last image, seen in the nearly three-foot-square Studio Wall (2014), was particularly affecting. A network of deliberate and serendipitous marks, the solid wall seems to flutter, waver, and disappear.