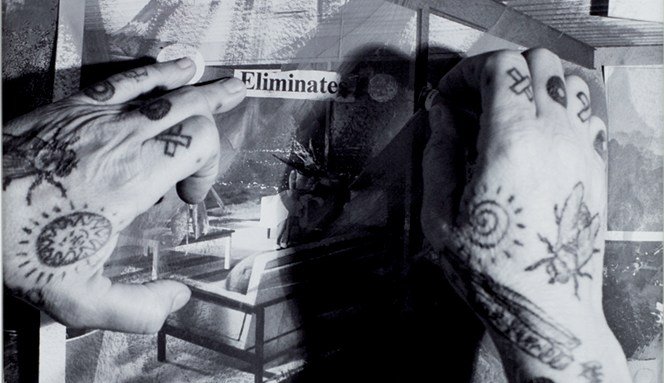 A paranoiac’s map of doomsday Los Angeles was the opening salvo in Catherine Opie’s exhibition “The Modernist.” Declaring a new, experimental direction for the artist, the five-by-eight-foot collage combined photographs of the city’s iconic midcentury architecture with ominous newspaper clippings and frenetic, hand-drawn flames. Given the wildfire disasters that have plagued California over the past year, the work’s feverish vision of a city on fire seemed, at first glance, all too real. But, as the viewer would find out, the collage served as a prop in an elaborate political fiction.

The gallery’s next room introduced Pig Pen (aka Stosh Fila), who appeared in a series of narrative photographs set at some of LA’s most venerable modernist houses: the Chemosphere, Silvertop, and the Sheats-Goldstein Residence, all designed by architect John Lautner in the early 1960s. A genderqueer performance artist, Pig Pen has modeled for Opie since the early ’90s, when the photographer’s portraits of nonconforming subjects famously thrust her work into art world debates on identity politics. Opie’s new images of Pig Pen rely on incongruous mise-en-scènes: the heavily tattooed protagonist clashes with the spare facades of the Lautner homes, not to mention the cultural elitism and affluence they signify. The black-and-white prints suggest a temporal sequence in which Pig Pen schemes to commit arson. We see them in front of the sliding glass doors of a hardware store, kerosene can in tow, or through a window, striking a match. But attempts to trace this saboteur’s machinations are frustrated by the lack of a decisive climax as well as by the arresting visual texture of many of the prints. An emphasis on depth and shadow, reflectivity and transparency—facilitated by the buildings’ use of glass, the putatively neutral material of choice for modernist architecture—lends noirish complexity to the scenes.

To reach the exhibition’s main event, viewers descended to a black box theater on the gallery’s lower level. Here they encountered Opie’s first foray into film, a tribute to Chris Marker’s classic La Jetée (1962). Composed entirely of still images, The Modernist grapples with the aftermath of two postwar desires: for elevated living amid the economic optimism of the housing boom and for free expression of the unconscious in art. In one sequence, Pig Pen contemplates a coffee-table book about the Case Study Houses, a residential development scheme initiated in Southern California in the 1940s that aimed to provide affordable, replicable models for middle-class family homes. The project blended the utopian tenets of the International Style (new technology and streamlined design as means for social progress) with the American dream of upward mobility. However, Pig Pen’s other reading material proves this promise has lapsed: the real estate section of a 2016 issue of the Los Angeles Times alludes to skyrocketing inequality despite the city’s homelessness epidemic.

Pig Pen appears discontent with their aspirational class status—their living room is decked with upscale furnishings, yet they sleep on a couch—not to mention the heteronormative prototype of single-family living. Soon our antihero revolts. Worked into a delirium that is part anarchic crusade for economic justice and part artistic struggle, they splash gasoline on the futuristic Chemosphere “like some pyro action painter” (in the words of Opie, quoted in an exhibition text), resolving to burn it all down. In one scene, Pig Pen adheres the phrase LA-BASED ARTIST to the collage of fiery destruction at the show’s entrance, at once taking credit for the crime and claiming it as their art. Like an abstract expression of political—rather than personal—angst, Pig Pen’s delusions of grandeur transform into a maniacal protest.

Opie’s depiction of alienation and symbolic violence is compelling, but her film ultimately disappoints. Where La Jetée employs stills as a metaphor for memory and the compulsive quality of mental images, the slideshow format here falls back on Opie’s competence as a photographer rather than productively complicating her plot. The film’s chronological and formulaic narrative, like the melodramatic headlines that litter Pig Pen’s collage, feels heavy-handed. More haunting are the elisions and flashbacks conjured by Opie’s photographs in the exhibition, which amplify her narrative’s ambiguous relationship to reality. One wonders what The Modernist would have been like as a photo novel rather than a ciné-roman.

‘Fight the Power’ Misses How Mainstream Rappers Became the Power