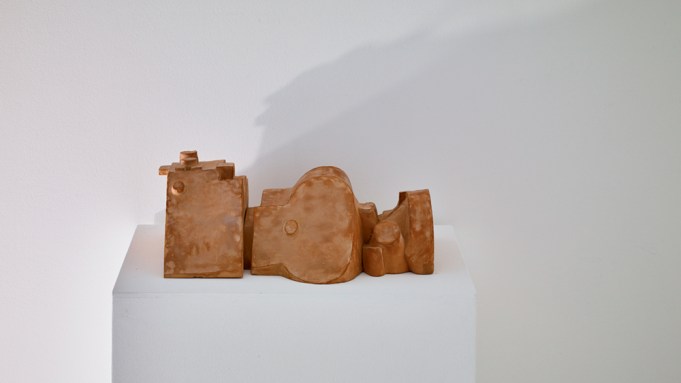 Pareidolia is the common phenomenon of seeing figures or faces within random patterns and objects: in wallpaper designs, say, or clouds, or geological formations—or in vintage movie cameras, which have been a recurring motif in Catherine Story’s work in recent years. All the paintings and sculptures in the British artist’s exhibition at PEER loosely portrayed movie cameras, and to a greater or lesser extent every one could be read pareidolically. It was what the works demanded, in fact, as if they were somehow inherently unstable.

Technically, the reason had to do with the quasi-Cubist style Story adopted. Her small oil paintings in particular, with their palette of earthy, melancholy hues and their radically simplified and abstracted forms, resonate anthropomorphically. A bulging tubular lens, a shadowy slanted gap, a pivoted bracket—these resolve in Lovelock (II), 2011, into the nose, eyes, and mouth of a clownish, slightly leering face. Odeon (2011) is more overt, depicting what appears to be some kind of despondent robot, with one protruding component raised as if in a wistful wave. The little clay works situated on plinths along the walls ranged from the exaggeratedly cartoonish—such as a dual-reel-camera model resembling a Mickey Mouse head in the three-sculpture installation Piano (2011–17)—to the teasingly reductive, as in Aria (2017), which consists merely of a jumble of rough-hewn blocks. Yet even in the latter case enough figuration is conveyed to give a vague impression of personality.

There’s more going on in these works, though, than just perceptual trickery. They all relate to the history of early cinema, with specific directors’ cameras used as starting points and titles typically invoking episodes of Tinseltown lore. Lovelock, for example, is a town in Nevada where Charlie Chaplin’s leading lady and real-life romantic interest, Edna Purviance, grew up; and the painting thus titled stems from a body of work Story made based on a meeting between Chaplin and Picasso in 1952. Not that you need to be aware of such minutiae to be impressed by Story’s work. Clearly, her main touchstones are the parallel artistic developments of early Hollywood cinema and European Cubism; and she connects the two to suggest a sort of speculative amalgam, a might-have-been historical moment. After all, both movements sought to pioneer, in different ways, new techniques for representing three-dimensional space, for conjuring up the illusion of a recognizable reality—for, in short, closing the gap between art and reality. Story’s pareidolic point, then, is partly to remind us that what we take for reality is illusory and unreliable to begin with.

The show also included what for her was a novel element, a site-specific installation—a way, perhaps, of shifting the historical focus more toward the here and now. Essentially, it was a kind of painted stage set: a large, flat, wooden, cubistic depiction of the sort of medieval casbah buildings that are found in North Africa (Story had visited the area recently) and that, of course, are famed as exotic locations for Hollywood productions, from Lawrence of Arabia to “Game of Thrones.” The idea, then, seemed to be about turning gallery viewers into actors—in both senses of the word. Our own act of looking, it was implied, was inevitably bound up with histories of mechanization, with the film industry, and with artifice in general. But also, as visitors to the exhibition, we could be viewed from outside, through the gallery’s glass frontage, as if occupying a sort of mise-en-scène. In short, we became living equivalents of Story’s cameras: machines for looking, and for being looked at, and perhaps even resembling human beings.